Prince Harry and Meghan, the Duke and Duchess of Sussex, shared one last update for their 11 million Instagram followers.

"As we can all feel, the world at this moment seems extraordinarily fragile," Harry and Meghan wrote in a post on their Sussex Royal account Monday. "Yet we are confident that every human being has the potential and opportunity to make a difference—as seen now across the globe, in our families, our communities and those on the front line—together we can lift each other up to realise the fullness of that promise."

"What’s most important right now is the health and wellbeing of everyone across the globe and finding solutions for the many issues that have presented themselves as a result of this pandemic," they wrote, referring to the coronavirus pandemic. "As we all find the part we are to play in this global shift and changing of habits, we are focusing this new chapter to understand how we can best contribute."

"While you may not see us here, the work continues," they wrote. "Thank you to this community - for the support, the inspiration and the shared commitment to the good in the world. We look forward to reconnecting with you soon. You’ve been great! Until then, please take good care of yourselves, and of one another."

Harry and Meghan will no longer use the @SussexRoyal handle when they step down as senior members of the British royal family on Tuesday.

The Sussexes plan to keep their @SussexRoyal Instagram account and SussexRoyal.com website online "for the foreseeable future," but both will remain inactive, according to a Buckingham Palace spokesperson. 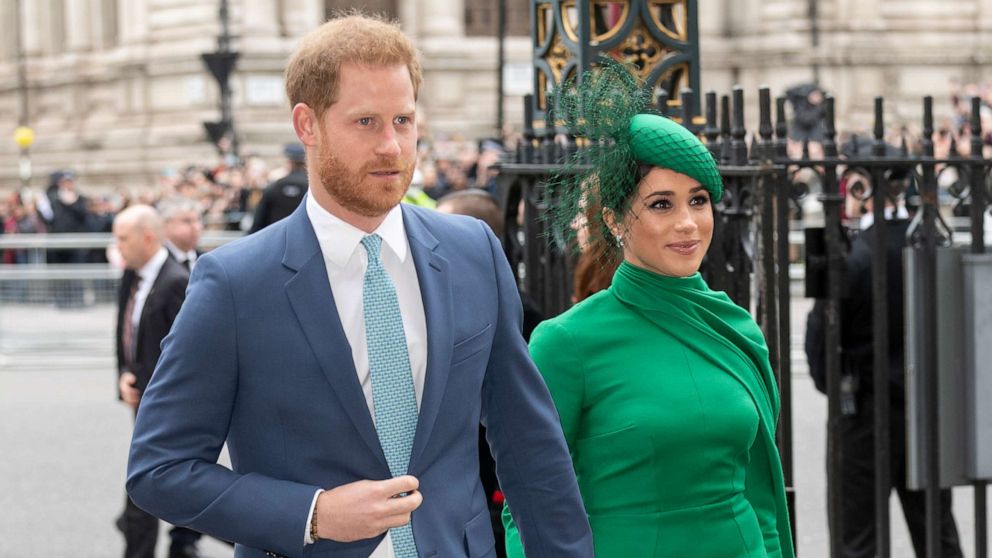 The discontinuation of their online Sussex Royal brands is the final public-facing dissolution of their royal lives. It comes less than two years after they tied the knot in a star-studded wedding ceremony at St. George's Chapel that was watched by millions of people.

The Sussexes at the time were heralded as the future of the royal family. Now, less than two years later, they have reportedly settled in Los Angeles with their son Archie and are working to build their own non-profit organization as non-royals.

"This is very much a bittersweet moment for Harry and Meghan," said ABC News royal contributor Victoria Murphy. "Harry was born into this life and grew up expecting to carry out duties as a working royal. He has often had conflicted feelings about the role, but to actually make that leap and walk away feels like a truly seismic moment for him and the monarchy."

She went on, "There is a lot that Harry and Meghan still feel frustrated about when it comes to the terms of their departure; however, ultimately they have secured their freedom which is what they wanted so this is also happy day for them. They will now have control over their lives and the life they want to shape for their son and that is something that is very important to them."

Harry and Meghan have not yet announced whether Los Angeles -- where Meghan was born and where her mother still lives -- will be their permanent base.

As of Wednesday, the couple's Buckingham Palace office will close. They are now being represented by Sunshine Sachs, a public relations firm with ties to the entertainment industry.

A Sussex spokesperson from Harry and Meghan's Buckingham Palace office issued their last statement on behalf of the couple on Monday.

"The Duke and Duchess of Sussex will spend the next few months focusing on their family and continuing to do what they can, safely and privately, to support and work with their pre-existing charitable commitments while developing their future non-profit organization," the spokesperson said. "For now, there will be no additional information on their next steps."

While Harry and Meghan appear to plan to stay out of the public eye in the near future, we do know that we will soon hear from Meghan.

A source close to Meghan told ABC News that the duchess recorded the voiceover in London last fall and had been made aware of the film through mutual friends of the filmmakers.

The Sussexes have also made a major hire for their yet-to-be-named non-profit organization. Catherine St-Laurent, who previously led a company launched by Melinda Gates, will serve as both Harry and Meghan's chief of staff and the non-profit's executive director.

“From our very first conversation, Harry and Meghan have expressed a deep commitment to improving lives and having a positive impact on society," St-Laurent said in a statement. "Their perspective on the role that empathy, connection, and compassion can play in that mission is both deeply personal and incredibly timely. I am delighted and honored to be able to play a role in realizing their vision as they embark on this journey of learning, listening, and inspiring all of us to act.”

Harry and Meghan have had to adjust their upcoming plans due to the pandemic, according to Murphy. Harry's father, Prince Charles, tested positive earlier this month for COVID-19, the illness caused by the virus, and Harry and Meghan have been sharing information about the virus and ways to help on Instagram.

"They are starting a non-profit and building a team but that process will understandably slow given what is going on in the world," said Murphy. "It's clear that for the next few months they want the focus to remain on the global response to the pandemic and they will be focusing on their family and staying safe while doing what they can."

The pandemic also makes the timing of Harry and Meghan's departure from the royal family particularly evident. Harry's brother and sister-in-law, Prince William and Kate, have been the royals' public faces during the pandemic and now the youngest senior members of the royal family.

"There is no doubt that Harry and Meghan's departure leaves a big hole for the royal family," said Murphy. "They have an incredible ability to galvanize a young and global audience and there was such a lot of excitement across the world about their marriage. There were plans for them to have a big role within the Commonwealth and Harry no longer using his honorary military appointments is also a big loss because the armed forces is a community that he has such an affinity with."

"Practically, the monarchy is also unable to cover as much ground having lost two full-time senior working royals so the Sussexes' departure will definitely be felt," she said.