When a series of fights at a Louisiana high school resulted in nearly two dozen students getting arrested, suspended or expelled in a span of 72 hours, a group of dads stepped up to help.

The five dads, all parents of students at Southwood High School in Shreveport, met on a Sunday night to brainstorm how they could help lessen the violence at their children's school.

"After about three hours, we came up with the idea to have us be a presence on the campus," said Michael LaFitte Jr., who hosted the meeting at his office, told "Good Morning America." "We thought we could be a collective unit to be able to show them that there are strong men who are on the campus."

The dads named their group "Dad's on Duty USA."

For the past six weeks, they have traded shifts so members of the group are always present on the Southwood High campus.

Wearing "Dad's on Duty" T-shirts, the dads welcome students to school, share jokes with them and offer a helping hand and listening ear, according to LaFitte, whose daughter is a junior at the high school.

The five dads who originally started the effort, as first reported by CBS News, have more than quadrupled in number, according to LaFitte, who works with an independent security company to vet the fathers who participate. 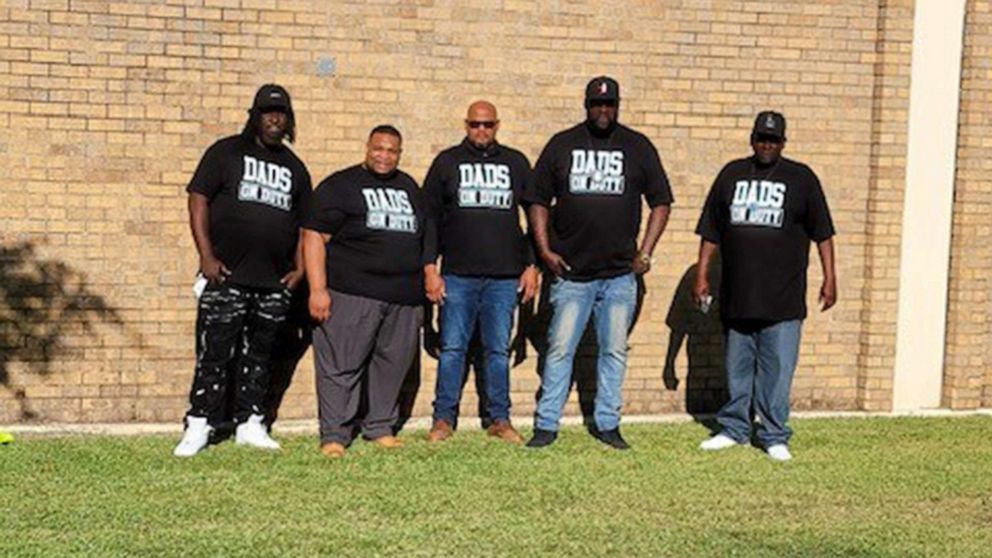 Working in shifts, there are six to 10 dads on campus at Southwood High every day, throughout the school day. They not only have a presence on the school campus, but also at extracurricular activities like football games and a recent homecoming dance.

"Some days we have long, long days, but we will be at school no matter what," said Zachary Johnson, who has four children at Southwood High and, like the other dads involved, also works a full-time job. "When your heart is into whatever you're doing, you make it work."

David Telsee III said his son, a 15-year-old sophomore, was at first not sure about the idea of seeing his dad on campus every day, but now has "warmed up to it."

"At first, mine was like, 'What are you doing dad?'" said Teslee, who spends around three to four hours each day on campus, split between the morning and the afternoon. "He's starting to warm up to it now, but at first he couldn't believe it." 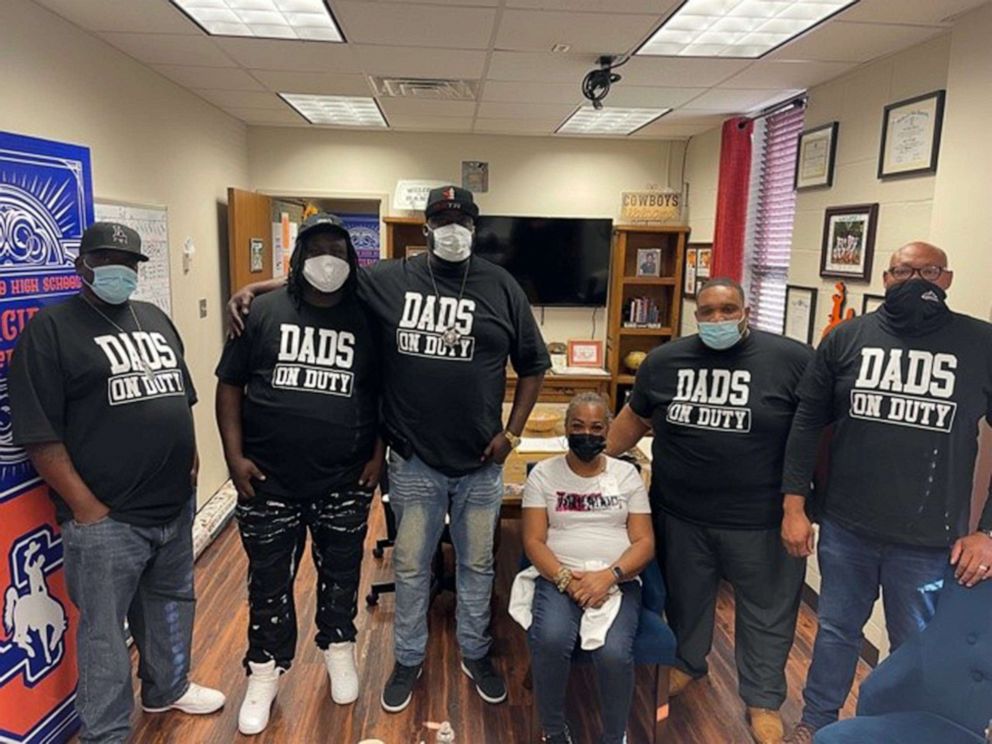 The dads' efforts have paid off, according to Kim H. Pendleton, Ph.D., the principal of Southwood High, a public school with around 1,500 students.

Pendleton said the school faced serious gang violence at the beginning of the school year, but that has tapered off since the start of the "Dad's on Duty" effort. 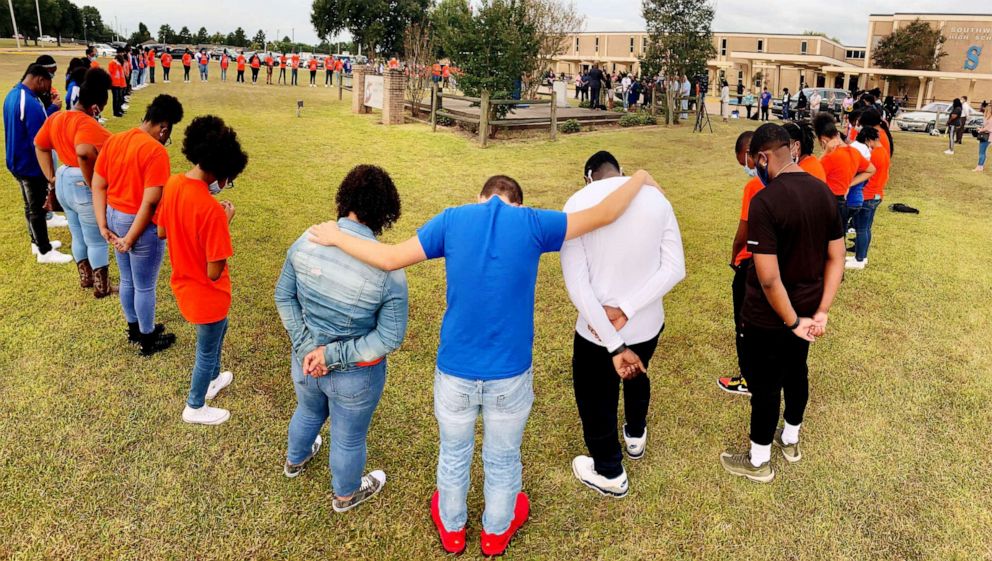 Shreveport Times via USA Today Network
Students meet at Southwood High School to pray for their fellow classmates, campus and community in hopes of restoring peace and a safe learning environment, on Sept., 29, 2021, in Shreveport, La. LEAD photo

"After the fights, there was a heavy police presence at the school and the kids told me they did not like that," said Pendleton. "The dads are from the community."

"They care and they're committed to being present," she said. "The kids see them as they're walking in in the morning. They greet the kids. They tell corny jokes. When I do my rounds to classrooms, they walk with me. They're making sure that kids are leaving school safely. People are able to talk to them."

MORE: This dad interviewed his daughter on her first day of school for 13 years and we're crying

With the success of their effort, the dads said they are working to expand "Dad's on Duty" to other schools in their school district and then hope to make the effort national.

"We just want people to know that it's possible," said Johnson. "We went with it hoping it would make an impact on the school, and now that we see that it's working, we want to take it to other schools."

"We'd like this to be the same as the PTA, something that is in every school in every county," added LaFitte. 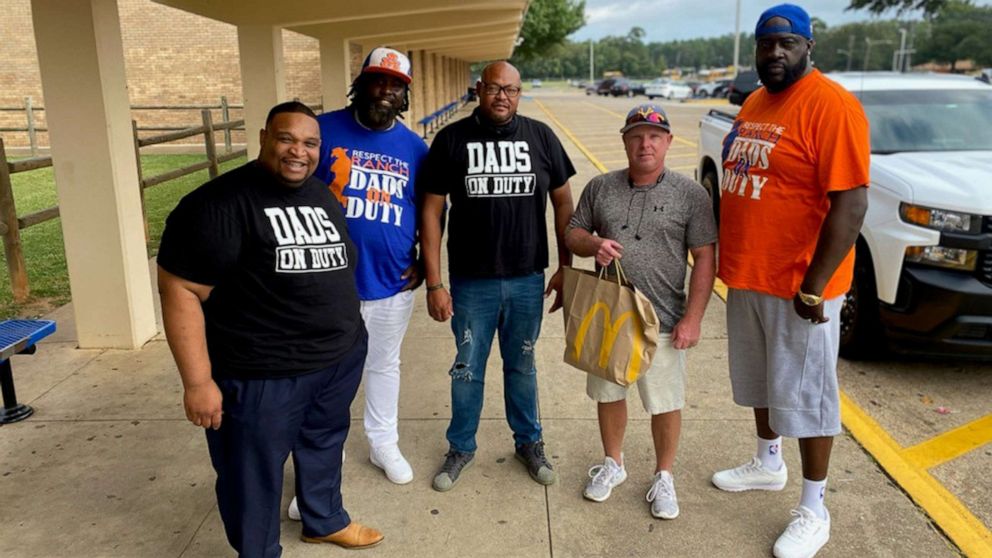 Pendleton said the dads have helped her fulfill her mission to make sure every student on campus feels seen and heard.

"My biggest charge to kids is to find one adult that you can interact with and you can trust and you can share information with and we can help you," said Pendleton. "I want them to find one person on campus who knows who they are, and the dads help with that."

To her, it's a great demonstration that it takes a team "to make sure that a school works and works well."