By Brittany Gaddy
Share —
Sign up for our newsletters to get GMA delivered to your inbox every morning!

Piece by piece, from her graduation robe to her hood, cap and stole, Nataly Morales Villa adorned her mother with her graduation regalia on the steps of the Harry Elkins Widener Memorial Library at Harvard University.

Verónica Morales Villa smiled proudly as she wore the ensemble Nataly had put together. Twenty-one years ago, she risked her life crossing the U.S.-Mexico border in hopes of finding better opportunities for herself and her daughter.

Morales Villa's aunt captured the special moment -- the mother-daughter duo posing in front of the library and pulling each other close for a tight embrace -- in a video recording.

"I kept reflecting on how, ultimately, me being able to wear a masters graduation outfit was a result of just everything that my mom sacrificed," 26-year-old Morales Villa said, speaking with "Good Morning America." "And if anything, she graduated with me."

"I felt very proud and excited," Morales Villa's mother told "Good Morning America" in a text message sent by her daughter. "She always sought scholarships & opportunities. Now she has her masters."

In the 2015-2016 academic year, 56% of college students had parents who did not complete a bachelor's degree, according to the National Association of Student Personnel Administrators' Center for First-generation Student Success.

Morales Villa, who falls under that same category, recognizes that she was afforded better opportunities in the U.S. than her mother had in Mexico.

"Due to limited circumstances, growing up in poverty, and also growing up in a society that didn't encourage women to pursue an education," said Morales Villa, "my mom only had the opportunity to pursue a middle-school education."

Morales Villa said she was 5 years old when she immigrated to the U.S.

One of her earliest memories after arriving in the states was how her kindergarten teacher kept using the English pronunciation of her name, which confused the non-English speaking student.

"I wouldn't respond to my teacher," Morales Villa said. "And I remember after a couple of weeks just feeling very frustrated."

Although she eventually corrected her teacher, she ultimately assimilated to its English pronunciation, Morales Villa said.

MORE: Mom of 9 graduates from medical school, plans to become a neurosurgeon

Morales Villa recalled being a shy but very applied student.

During middle school, she was placed in honors classes, she said. In high school, she took advanced placement classes and graduated with a 4.0 grade-point average.

"Despite everything going on at home, my parents always encouraged me to study, to take advantage of the opportunities of living in the United States," Morales Villa said.

Morales Villa's father struggled with alcoholism when she was a teenager, so her mother took the responsibility of raising their daughter by herself while maintaining a physically demanding job at a poultry plant, Morales Villa said.

After high school, Morales Villa recalled the challenges she faced as a first-generation student, noting a lack of institutional support for students with diverse backgrounds. While Morales Villa was able to help people in her community who spoke limited English, she found it difficult for her to navigate the college application process by herself, she said.

For example, there’s an assumption that people have prior knowledge about how to register for classes and know the language associated with the college setting, she said.

"All of this jargon, it's a different language, and without the experience and without breaking down these barriers, it only makes it more challenging," Waintraub Stafford said.

MORE: Daughter teaches her dad how to read and write

Weeks after her Harvard graduation, Morales Villa said she still finds it almost unbelievable to say she graduated despite the adversities she faced.

"But for me, in a way, there's this pressure," she said, adding that she aims to be an example for her little cousins.

"I want to be able to guide them and mentor them so that they don't face as many adversities as I did, or so they know [about] resources that I wish that I had known when I was younger," Morales Villa said. 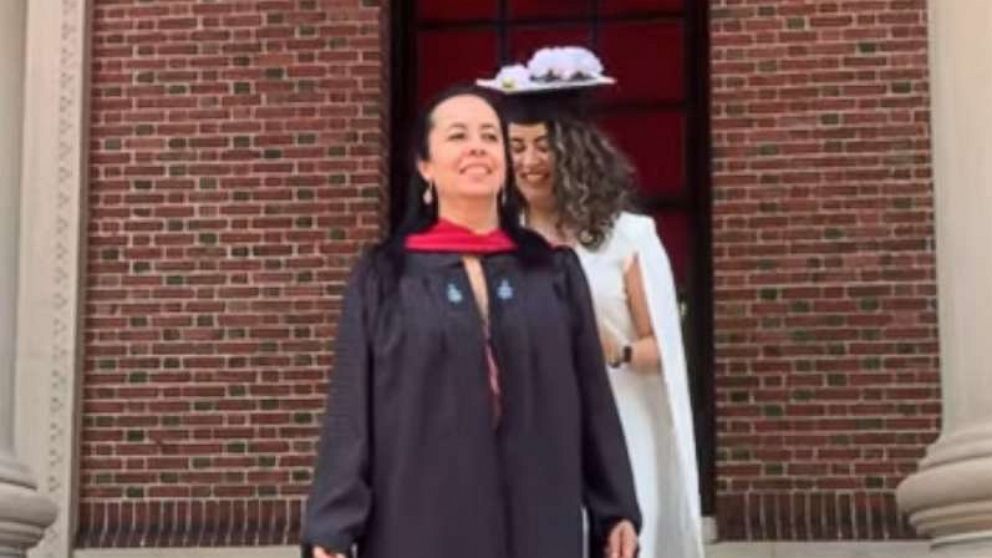 She's currently growing her own Spanish translation agency and developing a project in which she can provide students with LatinX backgrounds embroidered graduation sashes made by her community in Mexico, she said, adding that a percentage of every sale will support the artisans' children in their education.

"It's the most powerful tool to advance your community," she added.