A mom in Missouri is speaking out about her recovery after surviving a tornado that took the lives of her husband, mother and two youngest children, ages 5 and 2.

Kuri Bolger and her 8-year-old son, Brysen, are now moving forward together as the surviving members of their immediate family.

"I have Brysen," Bolger, 33, of Blue Springs, Missouri, told "Good Morning America."Thank God he made it through and everybody was able to save him because, at this point, he's my rock."

"It’s a roller coaster of emotion," she said of the aftermath. "I think there’s going to be really hard days and days that it’s a little bit easier, but just remembering that you just have to keep going."

Bolger and her husband, Michael, and their three children, Brysen and 5-year-old Kinlee and 2-year-old Owen, were visiting Bolger's mother and stepfather in Winterset, Iowa, on March 5 when the tornado struck. 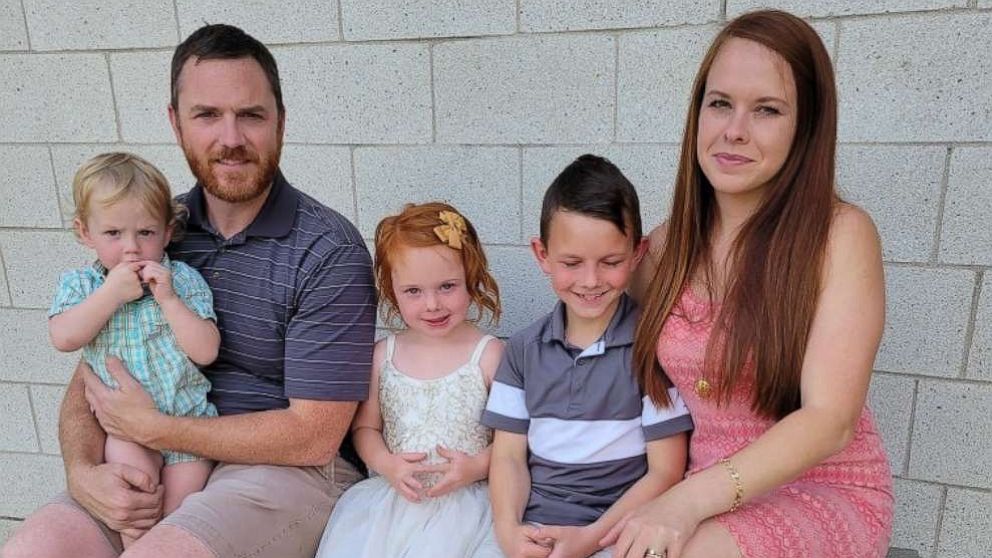 Courtesy Kuri Bolger
Kuri and Mike Bolger pose with their kids Kinlee, Owen and Brysen in this family photo.

The tornado, rated an EF-4 by the National Weather Service, was on the ground for nearly 70 miles. Bolger and her family huddled in a pantry during the storm, according to The Associated Press.

Bolger's stepfather and one of her brothers were in the home at the time of the tornado and also survived.

Bolger suffered a broken pelvis and broken leg and spent nearly 10 days hospitalized due to her injuries. Brysen suffered a sprain in one foot. 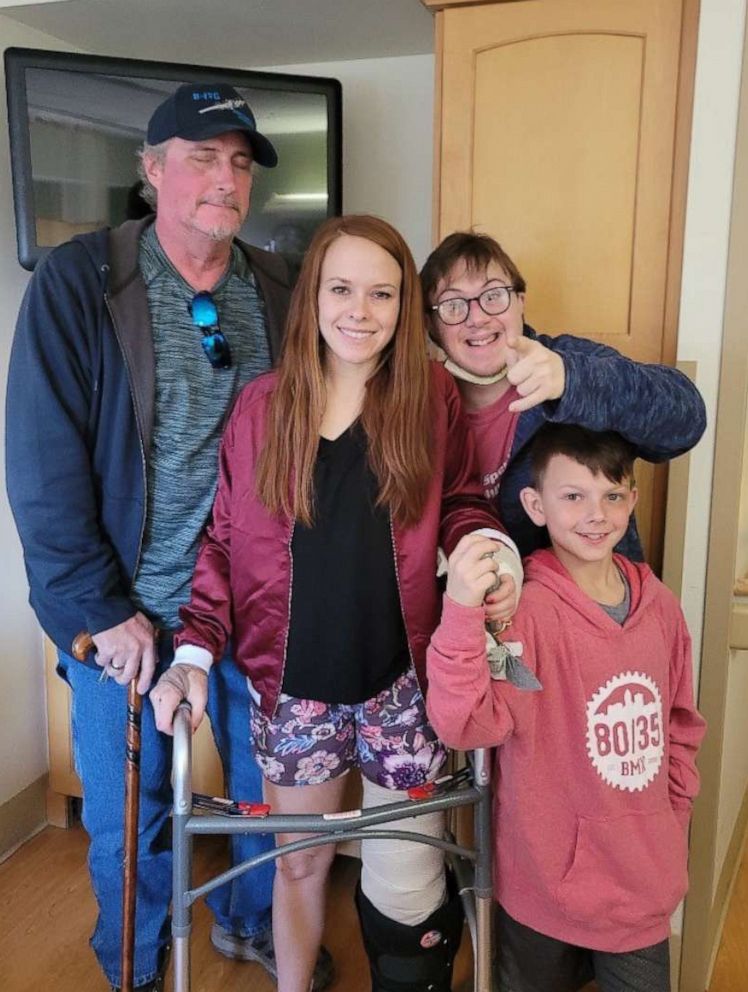 Courtesy Kuri Bolger
Kuri Bolger, center, poses with her family members who survived the tornado, including her step-father, brother and son.

The mother and son reunited while Bolger was hospitalized, a moment she said was bittersweet.

"I was so excited to have him, but also so sad that it was just us," said Bolger. "The rest of our family was gone."

Just hours before the tornado struck, Bolger said she and her mom, 63-year-old Melissa Bazley, had completed a workout. 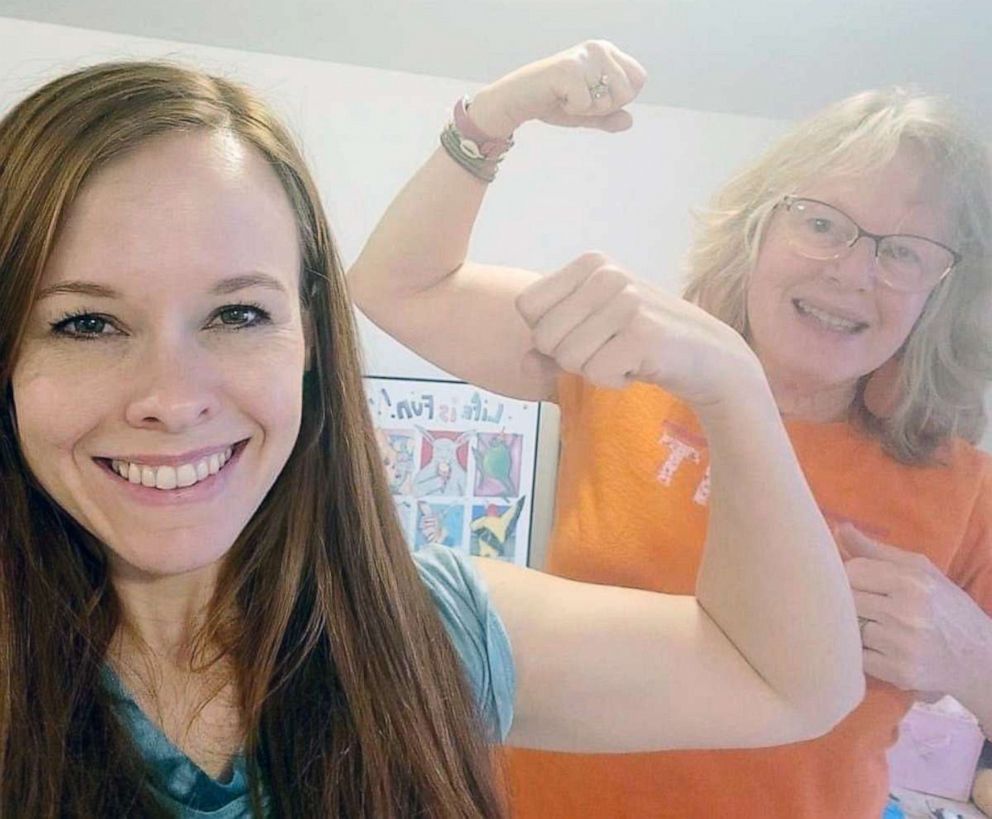 The day before, the family had spent time at an alpaca farm, according to Bolger, who said her family loved spending time together and going on adventures, especially ones that were outdoors, like racing BMX bikes.

Bolger said she and her husband made a point to focus on quality time with their kids and loved ones, time for which she is now thankful.

MORE: Woman whose daughter was murdered opens up about grief in new memoir

"Yeah, we have laundry and we'll get it done at some point, but on a nice day, we took the time to go on a family bike ride or go on a hike in the woods and just explore, and I am so thankful for that," she said. "I have all those memories."

"I also have a lot of pictures and videos, which I'm thankful for," Bolger continued. "My mom would always have her phone out and I'm like, 'Mom, put your phone down. We're, just hanging out.' But now I have all those memories, things we can look back at, and I am so thankful for that." 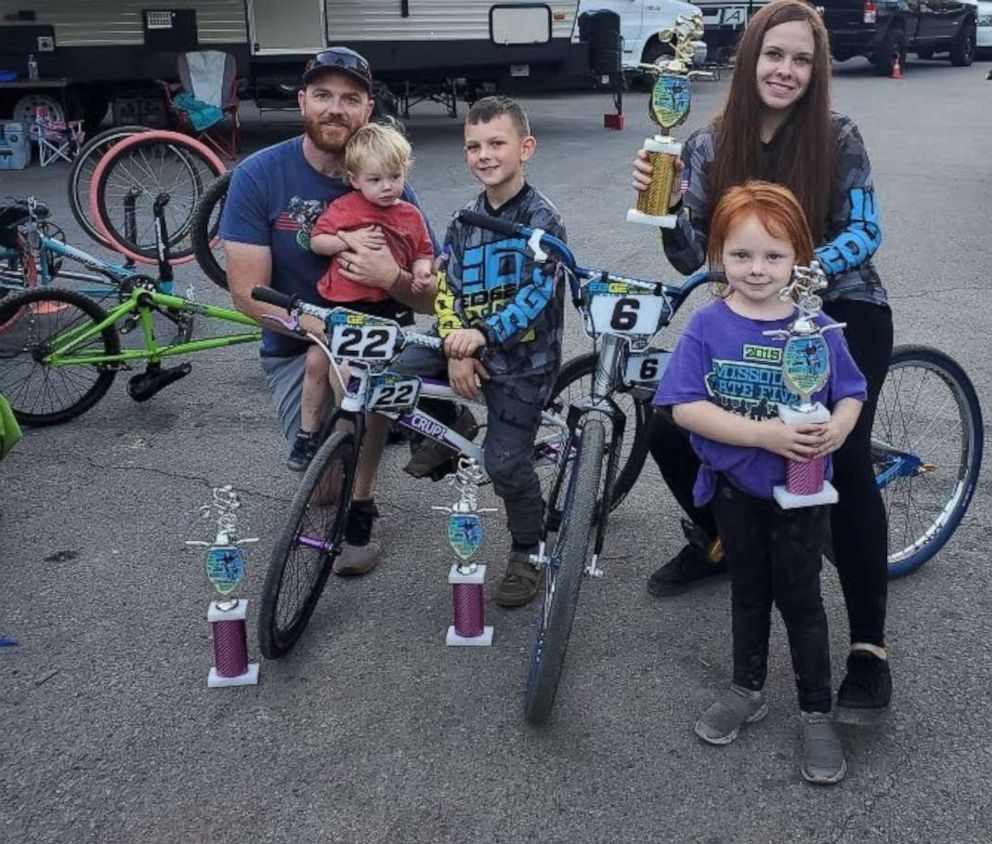 Courtesy Kuri Bolger
Kuri and Mike Bolger pose with their kids Kinlee, Owen and Brysen after competing in a bicycle race in this undated photo.

Bolger was a stay-at-home mom for her three kids while her husband worked as a pipe fitter.

She described Mike, whom she met around 13 years ago, as her best friend and someone who "did everything for everyone else."

Bolger remembered Owen for his fearlessness, copying everything his older siblings did, as well as his politeness.

"Everybody always told me, ‘I've never met a more polite 2-year-old,'" she recalled. 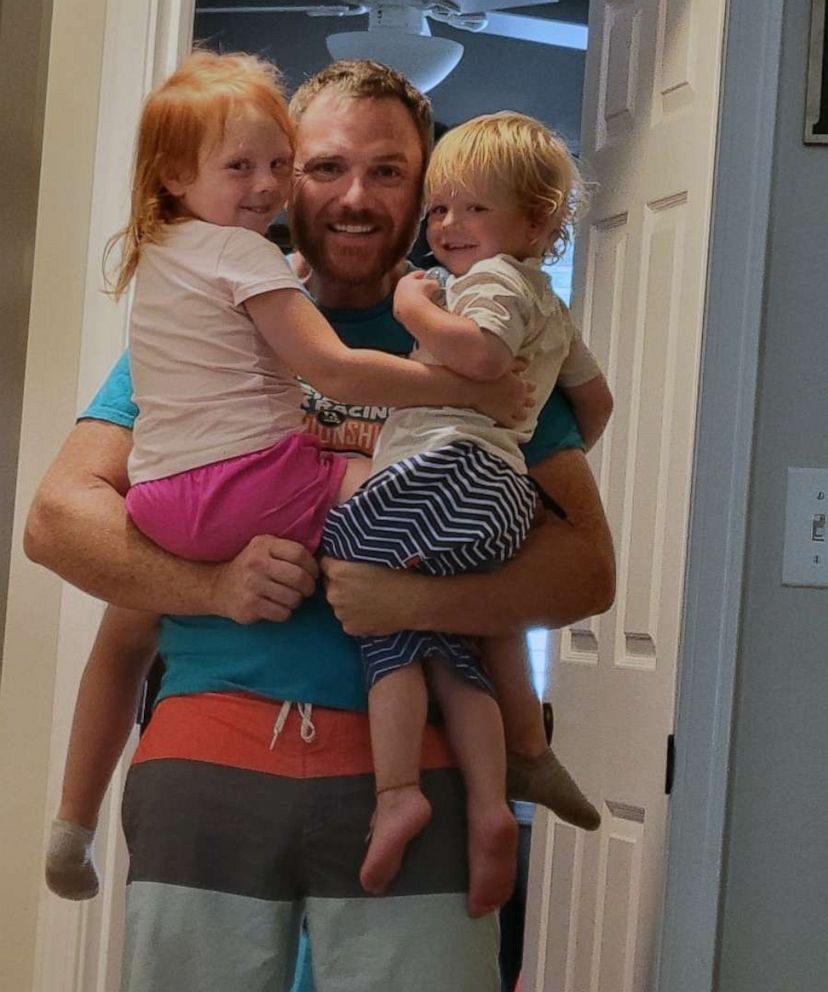 Courtesy Kuri Bolger
Mike Bolger, 37, holds his daughter, Kinlee, and son, Owen, who all died on March 5, 2022, in a tornado that struck Winterset, Iowa.

Kinlee, who was 5, had the "most sweet, kind soul of anybody I've ever met," according to Bolger.

"She'd be friends with anybody and everybody and just always really cared about other people before herself, which was a lot coming from a 5-year-old," Bolger said of her daughter. 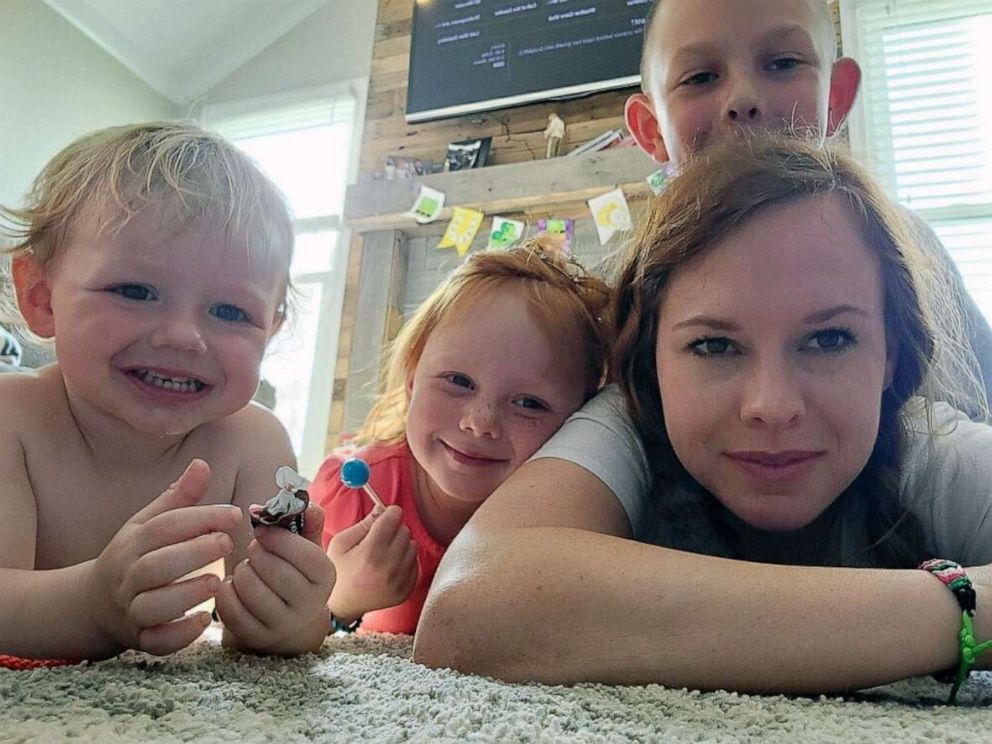 And her mom, Bazley, was a "free-spirit" who planned adventures for the family and loved being a grandmother, always carrying snacks and crafts to entertain her grandkids.

"I think that's where I get my spontaneous, adventure-seeking style of living," Bolger said of her mom. "She was just a bright light in everybody's world."

Now, Bolger and Brysen plan to carry on their family members' legacies.

Bolger said her family's tragedy has reminded her of the importance of kindness, saying, "I know everybody says life is short but you just never know. You never know. It just reminded me to be kind."

When she was hospitalized, Bolger said she and Brysen passed out snacks to nurses to "spread some love while we were there," adding of her family's loss, "We know it impacted us a great amount but I know it impacted a lot of other people too."

The local community has also rallied around Bolger and Brysen, raising over $500,000 on GoFundMe.

On Sunday, a local gym hosted a fundraiser for the mother and son, organized by Crystal Parker, a trainer who leads an online fitness community of which Bolger is a part. 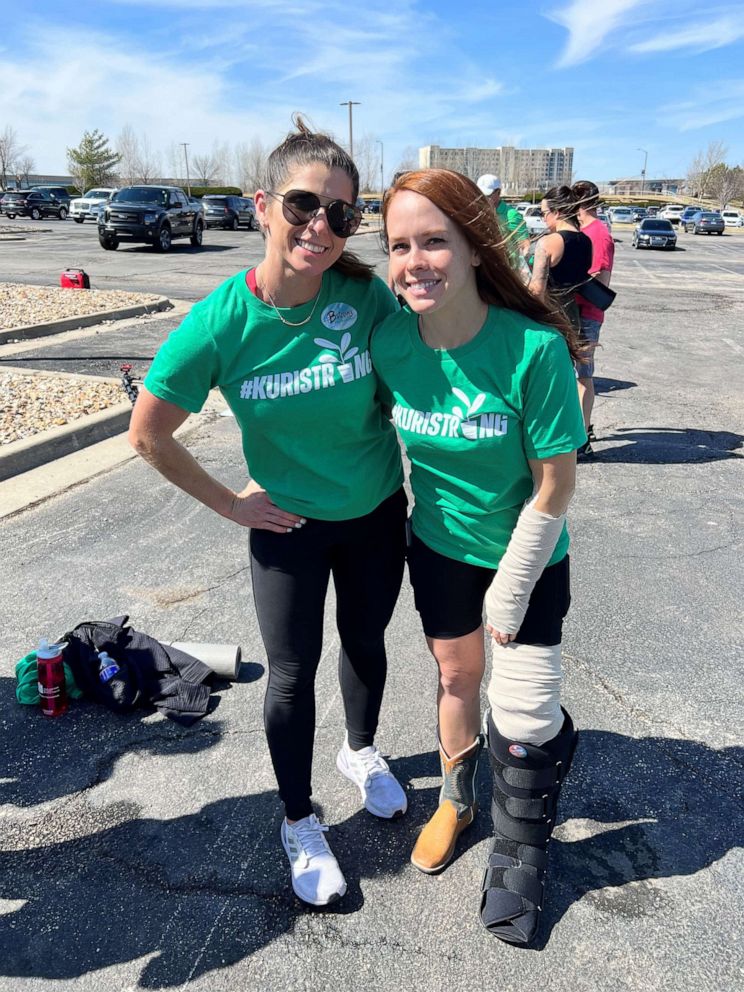 Bolger said she has been touched by all the support her family has received, from the big fundraisers to offers to help with seemingly small things like lawn care.

"I honestly don't have words to say about the incredible support that has been shown. People are just doing everything they can," said Bolger. "And a lot of people don't know what they can do, and honestly, just praying for us and being there for us, not just now but down the road. I know a lot of people are there now, but as they start to fade, we're still going need just people to be there to listen to us and to hang out with."

She continued, "Nothing is too little to be helpful. It's showing somebody that you care, and it's really important."