The halls are decked at one of Queen Elizabeth's residences as Britain's royal family gets into the holiday spirit.

Windsor Castle, where Queen Elizabeth spends many of her private weekends, is festively decorated with Christmas trees, wreaths and special gold china.

The highlight of the decorations are a 15-foot Christmas tree in the castle's Crimson Drawing Room and a 20-foot Nordmann Fir Christmas tree that was grown in Windsor Great Park and is now decorated with "hundreds of iridescent glass and mirrored ornaments," according to the website for the borough of Windsor, where the castle is located. 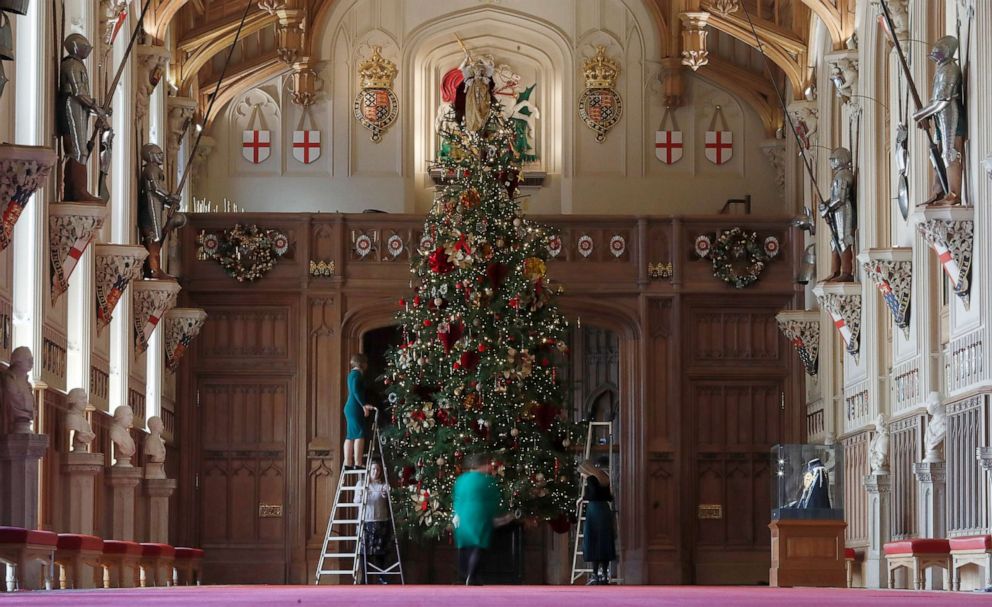 The 20-foot tree sits at the end of St. George's Hall, which is where Prince Harry and Meghan, the Duke and Duchess of Sussex, introduced their son Archie to the world last May.

(MORE: Duchess Kate is fabulous in fuchsia during a visit to children's hospice)

As with any family, the holiday season kicks off for Britain's royal family when the decorations arrive. Windsor Castle is the first of the family's residences with decorations unveiled to the public. 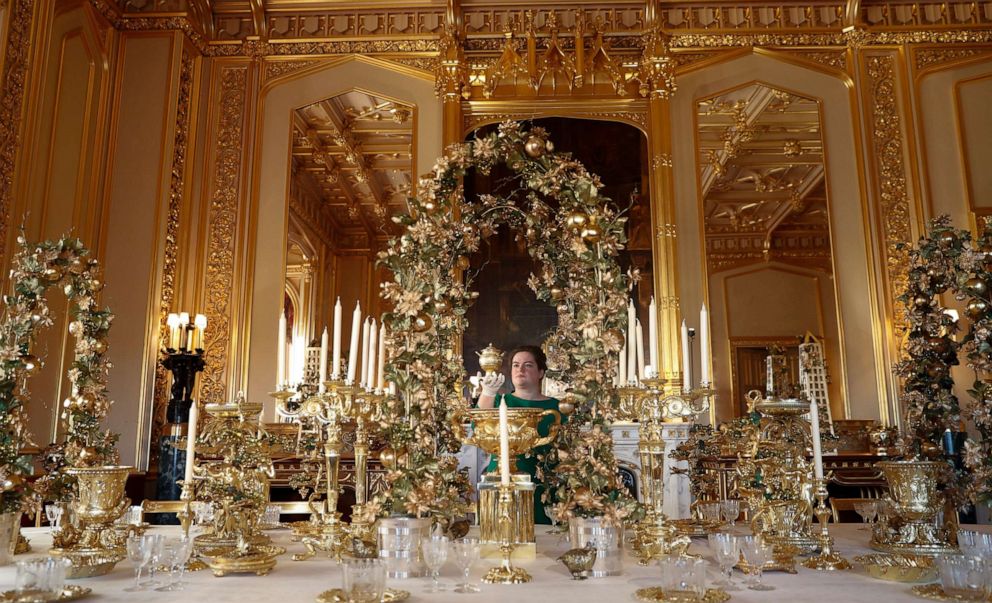 Alastair Grant/AP
A staff member adjusts part of the Grand Service bought by Queen Victoria in 1840 during a press preview at Windsor castle, Windsor, England, Nov. 29, 2019.

Once the Christmas trees are decorated, the struggle is to keep the decorations on the trees, Queen Elizabeth revealed in a documentary last year.

"The problem is the children love knocking those [baubles] off,” she said at Buckingham Palace in "The Queen's Green Planet" on ITV. “My great-grandchildren do. Even the grandchildren still."

She added with a smile, "The great thing is to make them decorate it -- then they’re a bit more careful." 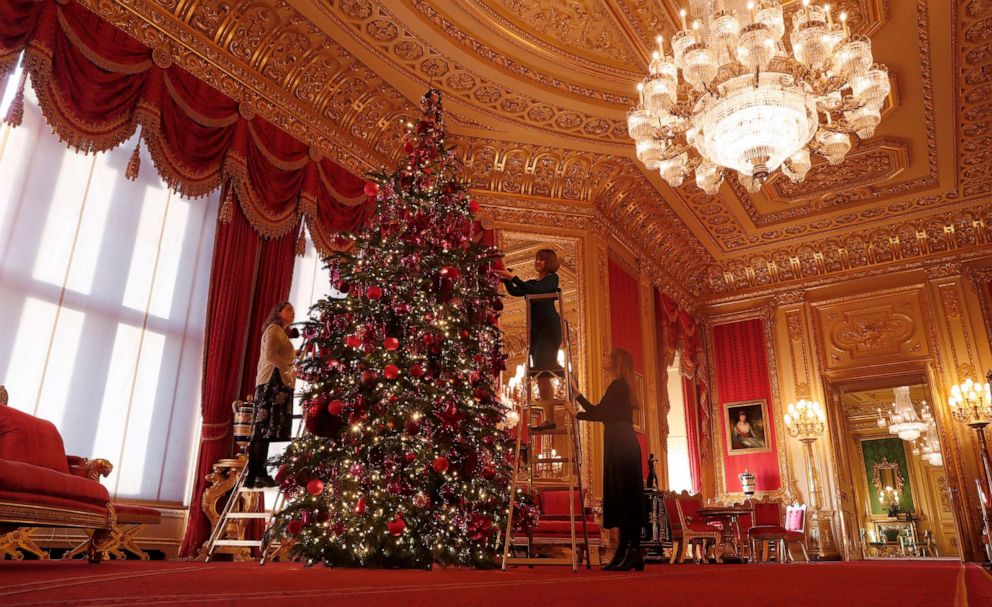 Alastair Grant/AP
Staff adjust decorations on a Christmas tree in the Crimson Drawing room at Windsor castle during a media preview in Windsor, England, Nov. 29, 2019.

Queen Elizabeth leads her family in a three-day-long celebration at her Sandringham estate that starts with family members gathering on Christmas Eve to exchange gifts, following the German tradition.

On Christmas Day, the family attends morning service at St. Mary Magdalene Church in Sandringham and then returns home for a traditional Christmas lunch. After lunch, the family sits down to watch the queen's annual televised Christmas message.

In the evening, the royal family gathers again for a Christmas buffet dinner with 15 to 20 different delicacies prepared by Queen Elizabeth’s chef. The day after Christmas, known as Boxing Day in the U.K., finds the royals partaking in the traditional Boxing Day pheasant shoot on the grounds of Sandringham. 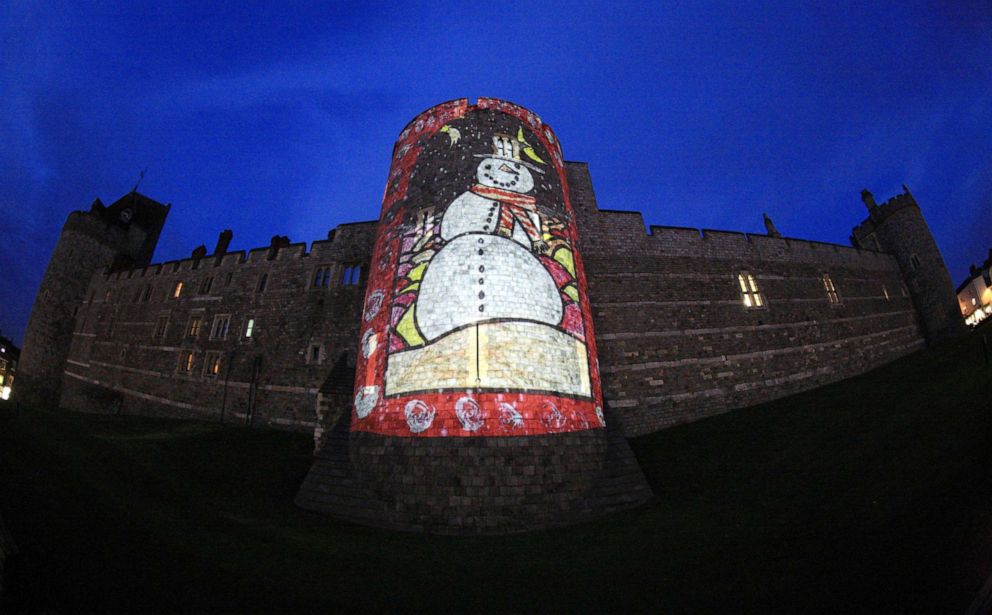 Geoffrey Swaine/Rex/Shutterstock
The Garter Tower at Windsor Castle is lit up with festive projections for the holidays, Nov. 17, 2019. 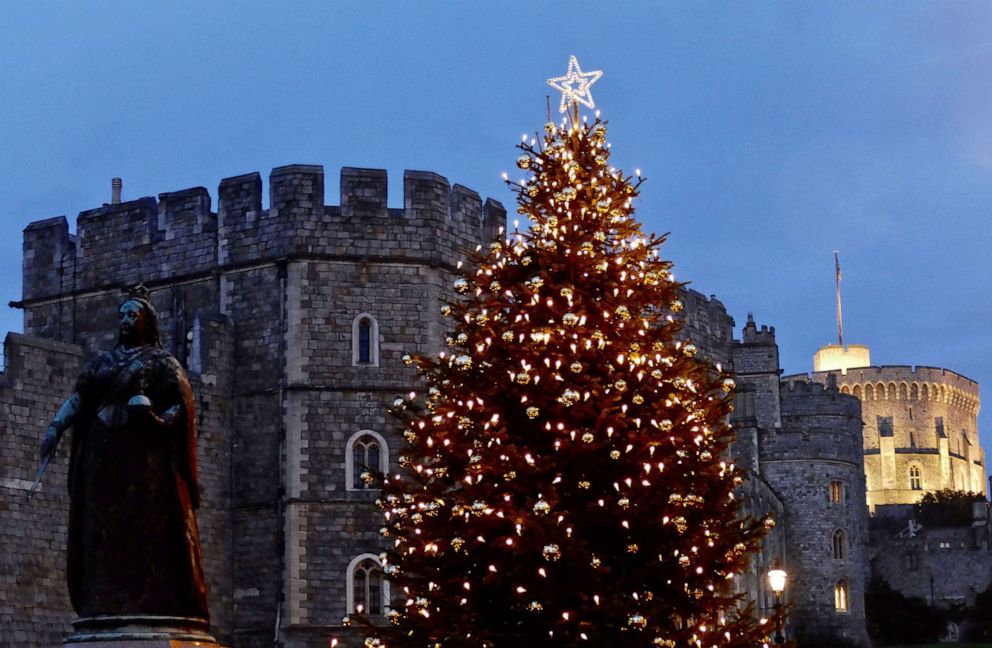 Geoffrey Swaine/Rex/Shutterstock
A tree outside Windsor castle is decorated for Christmas, in Windsor, England, Nov. 17, 2019.

This year's Christmas celebrations will be held without Harry, Meghan and Archie, who are opting this year to spend the holiday with Meghan's mother Doria Ragland.

Harry's brother Prince William and his wife Kate, the Duchess of Cambridge, and their three children are expected to join the queen and the rest of the family at Sandringham.

William and Kate got people excited for Christmas already this weekend when they shared details of an upcoming TV special for which they partnered with British baking legend Mary Berry.

"A Berry Royal Christmas" will air on BBC One on Dec. 16 in the U.K. and will feature William and Kate helping Berry in the kitchen as they throw a party for supporters of charities that help people in need during the Christmas season.