U.S. elite gymnasts Simone Biles, McKayla Maroney, Maggie Nichols and Aly Raisman are testifying before Congress Wednesday about what they say were failures in FBI's handling of the sexual abuse case against Larry Nassar, a former USA Gymnastics team doctor.

Nassar, a former doctor, was sentenced in 2018 to up to 175 years in prison after pleading guilty to sexually assaulting hundreds of girls and women.

"We have been failed, and we deserve answers," Biles, the first gymnast to speak, said while fighting back tears during parts of her testimony. "Nassar is where he belongs, but those who enabled him deserve to be held accountable. If they are not, I am convinced that this will continue to happen to others across Olympic sports."

Biles and her fellow gymnasts on Wednesday painted a portrait of a system that failed them.

"Over the past few years it has become painfully clear how a survivor's healing is affected by the handling of their abuse, and it disgusts me that we are still fighting for the most basic answers and accountability over six years later," said Raisman, who cited failings of USA Gymnastics and the United States Olympic & Paralympic Committee, in addition to the FBI's.

"It took over 14 months for the FBI to contact me despite my many requests to be interviewed by them," she said. "I felt pressure by the FBI to consent to Nasser's plea deal. The agent diminished the significance of my abuse and made me feel my criminal case wasn't worth pursuing." 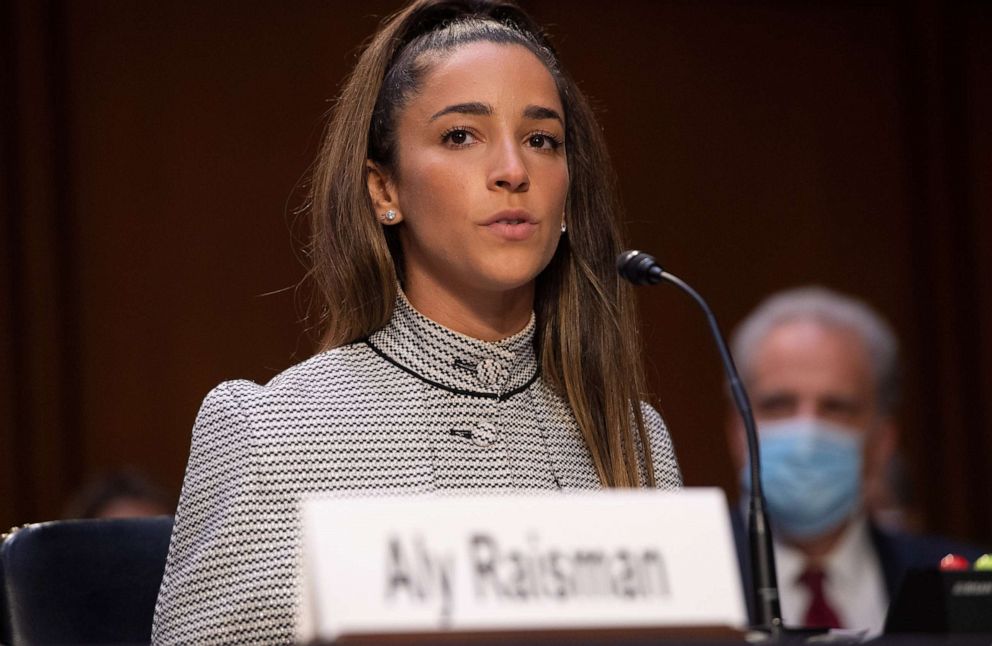 Raisman later described the delay in investigating Nassar as "like serving innocent children up to a pedophile on a silver platter."

MORE: Simone Biles opens up about depression she suffered after being sexually abused

Maroney accused the FBI of delaying documenting her claims against Nassar and of making false claims.

"Today," she said to the senators, "I ask you all to hear my voice. I ask you please do all that is in your power to ensure that these individuals are held responsible and accountable for ignoring my initial report, for lying about my initial report and for covering up for a child molester." 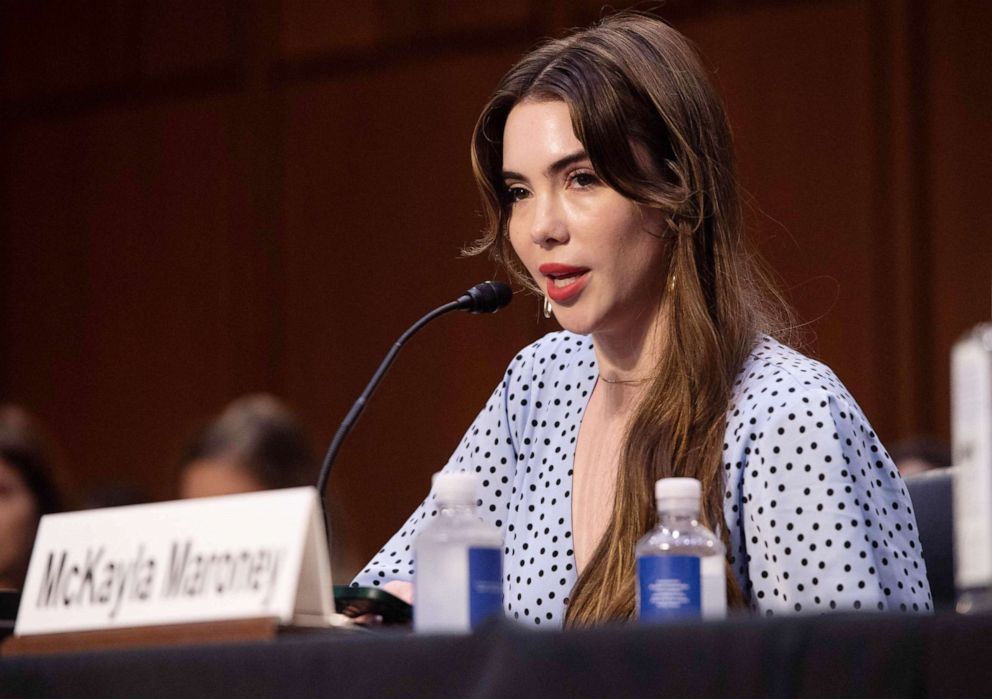 Nichols spoke about wanting people to know about those who suffered from Nassar's abuse, saying, "I want everyone to know this did not happen to 'gymnast two' or 'athlete A.' It happened to me, Maggie Nichols."

"I reported my abuse to USA Gymnastics over six years ago and still my family and I received even few answers and had even more questions why this allowed to occur and why dozens of other little girls and women at Michigan State had to be abused after I reported," she said. "In sacrificing my childhood for the chance to compete for the United States, I am haunted by the fact even after I reported my abuse so many women and girls had to suffer at the hands of Larry Nassar." 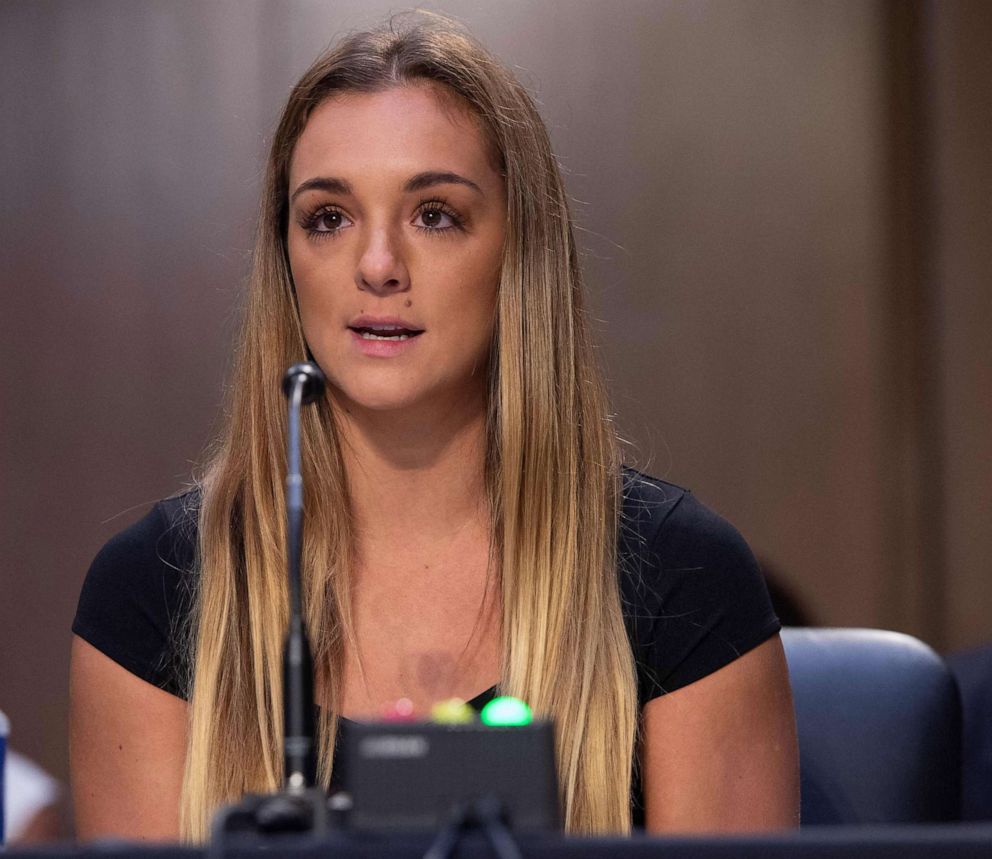 The hearing was held as the Senate Judiciary Committee is investigating the FBI's handling of the case.

A Justice Department inspector general report released in July found the FBI made "fundamental errors" in its response to allegations against Nassar that were first brought to the agency in July 2015.

The scathing report accuses FBI field offices in Indianapolis and Los Angeles of failing to respond thoroughly to allegations against Nassar, which allowed him to continue to work with gymnasts at Michigan State University as well as at a high school and a gymnastics club in Michigan.

"In reviewing the inspector general's report, it truly feels like the FBI turned a blind eye to us and went out of its way to help protect USAG and USOPC," Biles said in her testimony. "A message needs to be sent: If you allow a predator to harm children, the consequences will be swift and severe. Enough is enough." 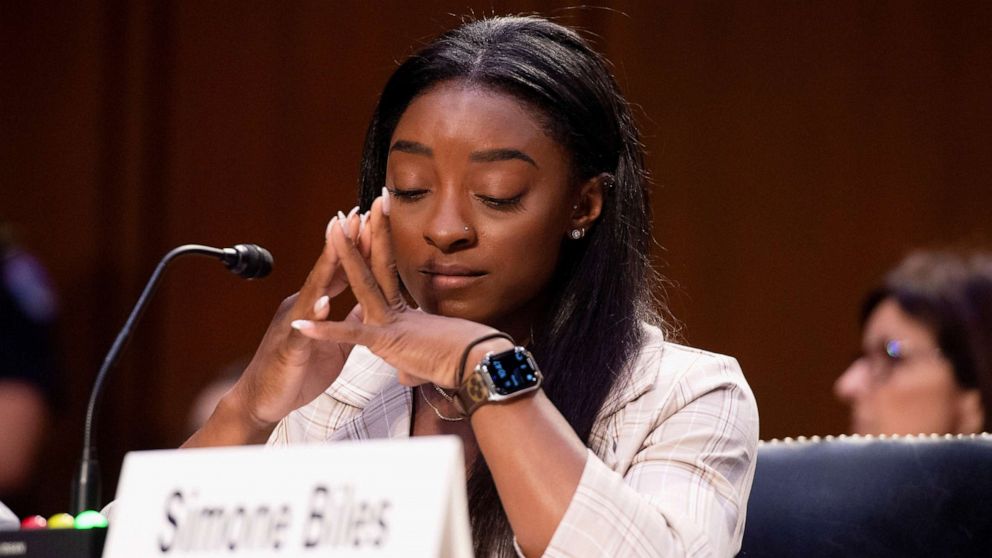 "I'm sorry for what you and your families have been through. I'm sorry that so many different people let you down over and over again. And I'm especially sorry that there were people at the FBI who had their own chance to stop this monster back in 2015 and failed," said Wray, who wasn't FBI director at the time allegations against Nassar were made. "That is inexcusable. It never should have happened, and we're doing everything in our power to make sure it never happens again."

Wray confirmed in his testimony that the FBI has fired an Indianapolis-based agent who failed to investigate allegations against Nassar. He also said another agent criticized in the inspector general's report retired from the agency in January 2018

"I and my entire senior leadership team will make damn sure everybody at the FBI remembers what happened here in heartbreaking detail," Wray said, later adding that the FBI has instituted policy changes recommended in the inspector general's report. "We need to remember the pain that occurred when our people failed to do their jobs. We need to study it. We need to learn from it." 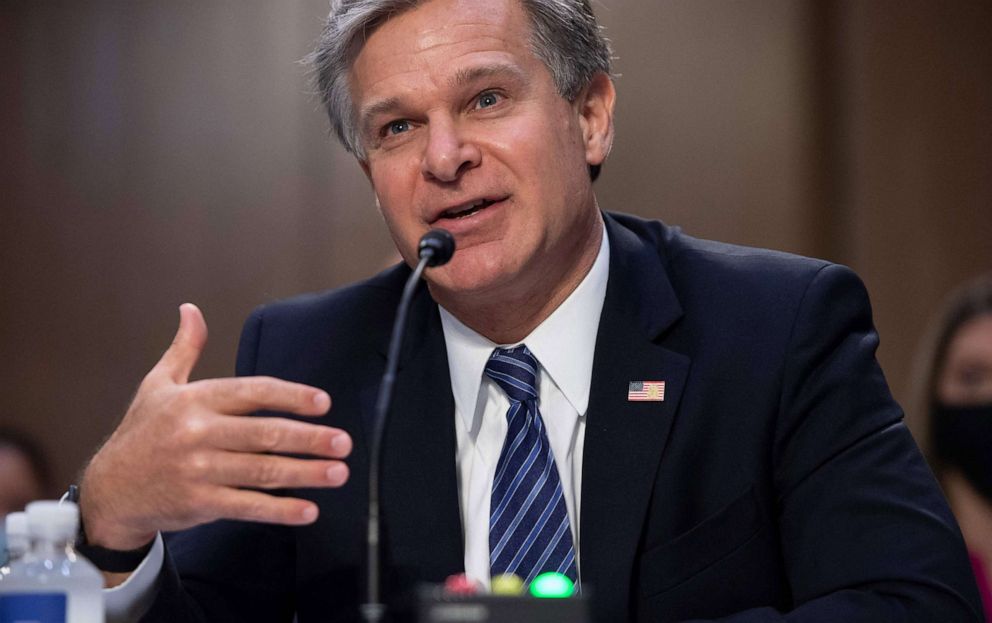 Department of Justice Inspector General Michael Horowitz lauded the four women's bravery in sharing the "deeply tragic series of events," recapping the report's findings by adding that "Nassar's abuses could and should have been caught sooner if appropriate action have been taken."

When the gymnasts were asked Wednesday what they believe justice looks like, Raisman said she wants a "complete and full" investigation of the FBI's handling of the case.

Biles said she wants those involved in the botched investigation to be prosecuted to the "fullest extent," adding: "They need to be held accountable.

MORE: Simone Biles speaks out on new report about flaws in Larry Nassar investigation: 'Numb is becoming a normal feeling'

The Justice Department has at two separate times declined to move forward in prosecuting the FBI officials whose misconduct was outlined in the inspector general's report.

A Department of Justice spokesperson declined to comment when asked by ABC News why no department officials besides Horowitz attended Wednesday's hearing.