Adele's latest social media photo with her hair styled in Bantu knots has sparked controversy with many asking if the look is an example of cultural appreciation or appropriation.

On Instagram Adele shared a photo of herself wearing tie-dye pants, a Jamaican flag print bikini top, gold accessories and her hair styled in Bantu knots -- a traditional African hairstyle.

"Happy what would be Notting Hill Carnival my beloved London," she captioned the photo. In the post, the singer appears to honor the annual festivals celebrated in British West Indian culture.

Her post, which has gained over 5 million likes, has also racked up a long list of comments with divided opinions on her look. Many called out the singer for culturally appropriating African and Jamaican culture while others believe Adele was simply paying homage and celebrating the culture.

"Adele could have showed up to carnival as her beautiful lovely rich self and show appreciation by supporting the local vendors and whining up her waist to the music of the islands, waving whatever flag she wanted," said @eyeluvjaz on Instagram. "Instead she showed up looking like a caricature of what’s supposed to be black culture. A costume indeed. She is too wealthy and beautiful to be walking out her house looking like a try hard."

Controversial thoughts surrounding the singer's look continued on Twitter with one user calling it a "compliment."

"Totally agree. As a Jamaican, I feel it is a compliment when our country is celebrated by others...no matter their color," said @diana_dianamyte. "Our motto, 'out of many, one people' says it all. We are a diverse island," she continued.

United Kingdom Labour MP for Tottenham, Shadow Lord Chancellor and Shadow Secretary of State for Justice David Lammy dismissed the allegations of cultural appropriation tweeting: "This humbug totally misses the spirit of Notting Hill Carnival and the tradition of ‘dress up’ or ‘masquerade’ Adele was born and raised in Tottenham she gets it more than most. Thank you Adele. Forget the Haters.”

Poppycock! This humbug totally misses the spirit of Notting Hill Carnival and the tradition of “ dress up” or “ masquerade” Adele was born and raised in Tottenham she gets it more than most. Thank you Adele. Forget the Haters. https://t.co/sabpPPRtID

In this moment, black women don't have that same luxury to put on and off hairstyles and still be regarded in the same way.

What is cultural appropriation?

Cultural appropriation is when someone or a group from one culture takes elements, trends, styles or anything related from another, often underrepresented culture. In Adele's case and in today's cultural reckoning on race and identity, there are a few matters to consider.

"The issue with cultural appropriation for me is that we cannot separate this conversation from the larger context of white supremacy, particularly in this racially tense moment," Dr. Yaba Blay, a scholar-activist, public speaker, and cultural consultant, told "Good Morning America."

"I think it's less of an issue with her wearing the Jamaican flag. Fine, if you want to appreciate Jamaican culture, wear the Jamaican flag," she continued." We know that there are people of all races and backgrounds from Jamaica. Technically, the key point is the hairstyle she's wearing her hair in is a traditional African hairstyle called Bantu knots, and I think that's what takes many black women particularly over the edge because our hair has become so politicized."

Bantu knots originated from the Zulu people in South Africa and have been spotted on women of color for decades. The hairstyle has also been worn by celebrities such as Rihanna, Tracee Ellis Ross and several others.

The look falls under natural and braided hairstyles which have been commonly been discriminated against in schools, workplaces and more as unprofessional.

In 2019, California became the first state to ban natural hair discrimination under the CROWN Act (Create a Respectful and Open Workplace for Natural Hair). Sen. Holly Mitchell lead the charge for the new legislation after noticing viral stories such as the New Jersey wrestler who had to have his locs cut in the middle of a tournament.

"A Google image search for 'unprofessional hairstyles' yielded only pictures of Black women with their natural hair or wearing natural braids or twists," she said during a speech.

There was also a U.K.-based mother who took on schools' policies that she says restrict boys like her son from having long hair.

A barometer that Blay outlined to decide if a look is appropriation or appreciation is asking if this is a look Adele would wear on other occasions?

"If you don't appreciate it so much as to wear it to a boardroom, then it does feel like a costume," Blay said. "In this moment, black women don't have that same luxury to put on and off hairstyles and still be regarded in the same way."

"There is a continual and repetitive practice of folks who aren't Black, being able to benefit from our rhythm without having to suffer from our blues," she continued. "As a white woman, you are able to wear a hairstyle that many of us will be denigrated for. And so, even worse, that you do it as a costume." 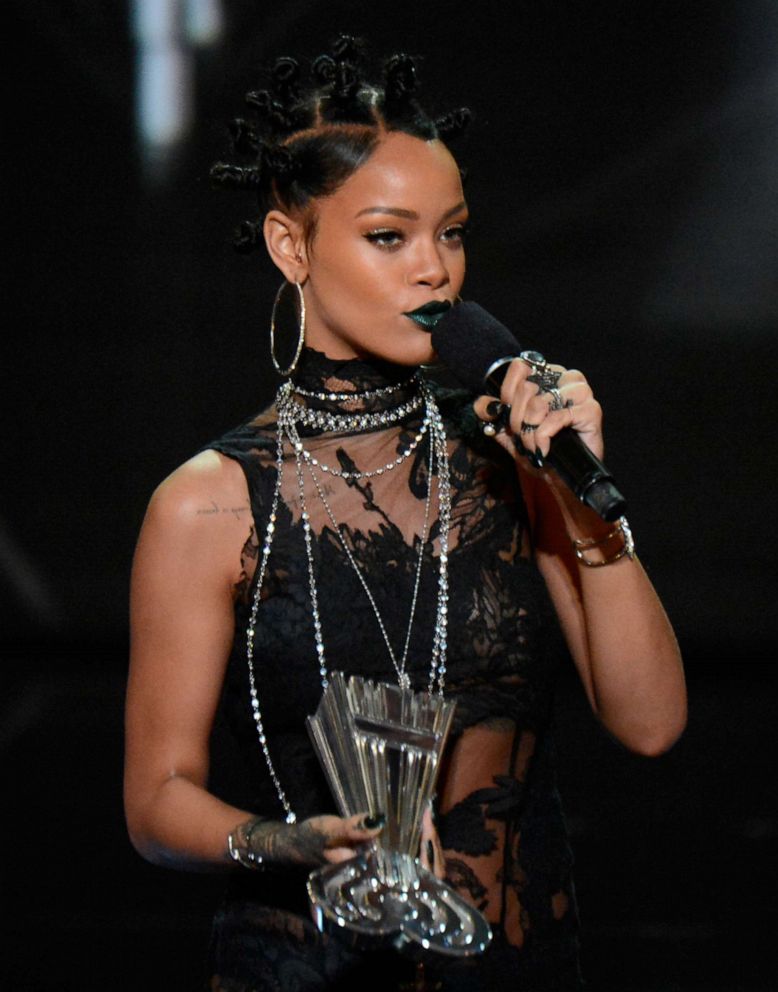 Kevin Mazur/Getty Images, FILE
Rihanna accepts the Song of the Year award for 'Stay' onstage during the 2014 iHeartRadio Music Awards held at The Shrine Auditorium, May 1, 2014, in Los Angeles.

Blay also highlights that while there are divergent views on "appreciation" versus "appropriation" particularly among Black Americans of Caribbean descent and U.K. Black and American Blacks, it's important to note that just because Adele may have "permission" to behave in a particular way in one context, doesn't mean that it is OK or above critique.

"We should expect that Black folks across the world, whether they are of Caribbean descent or are from the UK, will have a visceral response to her behavior or 'costuming.'

"The Kardashian-Jenners are the latest in a long line of high profile examples, but from tap to techno, jazz, rock 'n roll and beyond, Black American innovations have been hugely globally influential, whilst often having their origins erased," she told "GMA."

In 2016, Khloe Kardashian was also accused of appropriating Bantu knots when she posted a photo wearing the look.

Chanel was accused of cultural appropriation for featuring a white model wearing Bantu knots in a spring 2017 campaign.

"In regards to Adele specifically, it is the reality of different histories and cultural contexts that account for the differences in reaction from Black Americans, in contrast to Jamaican and Black British responses," said Dabiri. "Of course, there are people on both sides of the Atlantic who take both 'for' and 'against' positions -- we're not a monolith."

"Rather than fueling the diaspora wars," she added. "I would hope that the different responses open up dialogue for us to compare our different experiences."