Florence Pugh recently showed off yet another stunning pink look on the red carpet of the 2022 British Independent Film Awards.

The actress donned a soft pink nightgown-like Rodarte gown that included a thigh-high split and lace trim. She topped the look with a hard-to-miss matching cape that included lots of tulle and ruffles.

"This dress has been on our minds ever since we first saw her," Pugh wrote in the caption of an Instagram post on Monday, alongside a carousel of photos of the look. "Thank you @rodarte, @kateandlauramulleavy you are unbelievably talented and unbelievably kind. @tiffanyandco on my fingers, wrists and lobes… always a pleasure sparkling in your items." 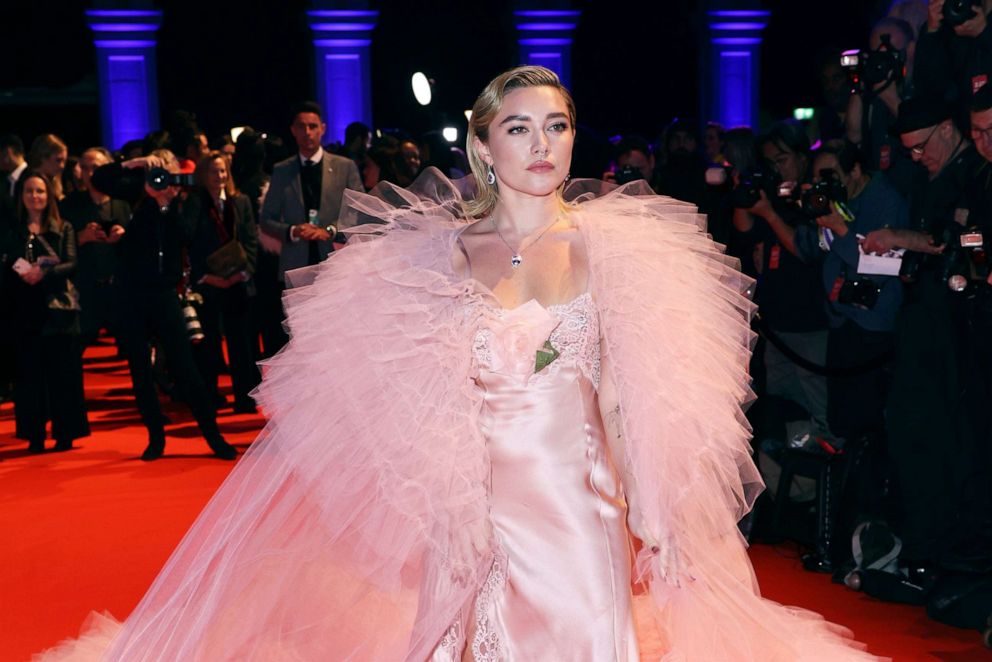 Rebecca Corbin-Murray, Pugh's stylist, also shared a video and several photos of Pugh wearing the look on Instagram, zooming in on some of the details.

"A pink confection," she captioned one of the posts.

Pugh was nominated for best lead performance at the British Independent Film Awards for her role in the Netflix film "The Wonder," which tells the story of a nurse who "travels from England to a remote Irish village in 1862 to investigate a young girl's supposedly miraculous fast," according to the streamer's website.

Pugh has had other similarly popular pink fashion moments this year. In October, she wore a sheer, sequined two-piece Valentino ensemble during Paris Fashion Week. Pugh posted a photo of herself wearing the look along with the caption "Trust the button," apparently referring to the single button fastening together the bottom of her cropped blouse.

Pugh also made headlines earlier this year after wearing a sheer "Barbiecore" pink gown to Valentino's Haute Couture Fall 2022 show in Rome. The actress later addressed critics of the ensemble as well as online trolls who left harassing comments about her body on social media.

"What's been interesting to watch and witness is just how easy it is for men to totally destroy a woman's body, publicly, proudly, for everyone to see," she wrote in a lengthy Instagram caption at the time. "You even do it with your job titles and work emails in your bio..?"

Pugh also said she was thankful that she'd come to terms with the intricacies of her body and all of the flaws that she couldn't bear to look at when she was 14.

"What's more concerning is…. Why are you so scared of breasts?" she wrote. "What. Is. So. Terrifying."