The sustainable pick cost her around $50 with shipping. It’s part of her “OneOutfit100Days" project.

Mooney started the project in early September to show that people shouldn’t be defined or labeled by the clothing they wear.

"I was a little bit fed up with the cultural expectation to go shopping and spend all this money for other people to approve of me," Mooney told "Good Morning America." "There is no rule that says I cannot wear the same thing every day if I choose to, so I thought why not. I’m just gonna do that and then we can talk about how our clothes really don't define us." 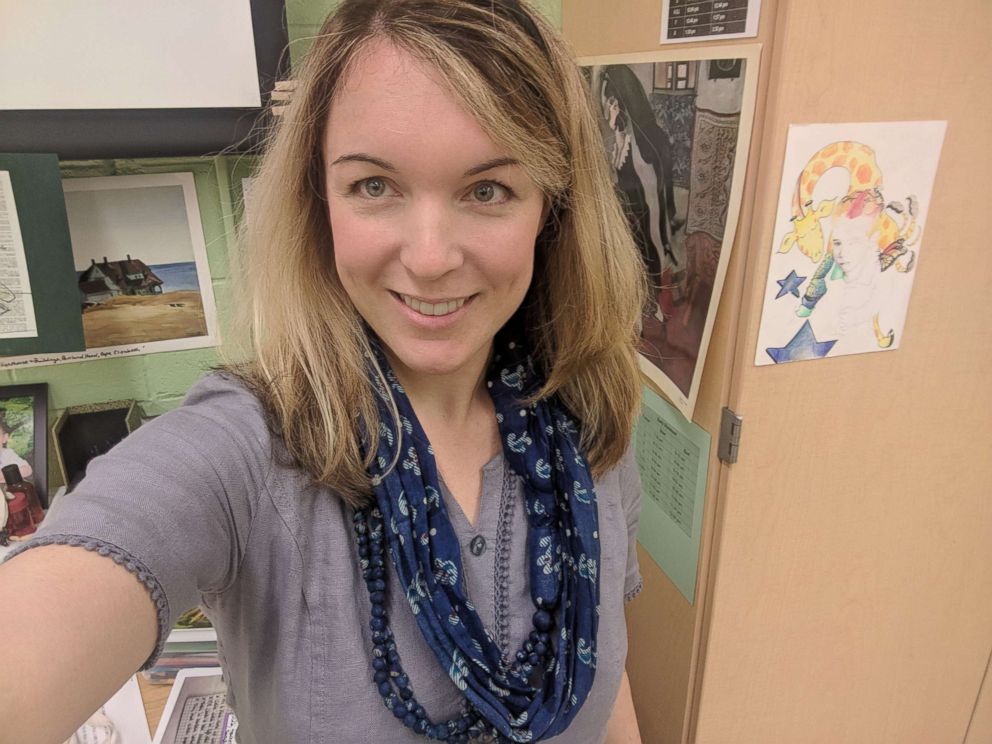 Mooney hoped that by wearing the same dress daily, the people around her would start to acknowledge that there is more to one’s image than the way they dress.

"The things that we do define us, and if we spend less energy trying to look good and trying to create this superficial image of who we are, then we might have more energy to do meaningful things and define ourselves based on the good that we do instead of how good we look," she said.

Mooney chose the fair trade dress because "it itself is a rejection of fast-fashion," she said, referring to mass retailers who quickly produce clothing in bulk to capitalize on industry trends.

The teacher said she wanted a versatile piece that she could wear with different sweaters and accessories. She also wanted to buy from a company that ethically produces their clothes.

The project evolved to focus on sustainability when she realized the topic wasn’t on everybody else’s radar as much as it was on hers. "It was really just sort of a subconscious underlying motivation for me because that’s just something that I’m interested in my life in general."

She upholds these values in her home life. "We’re always kind of conscious of what we’re using, what we’re wasting and where it’s coming from," she said. 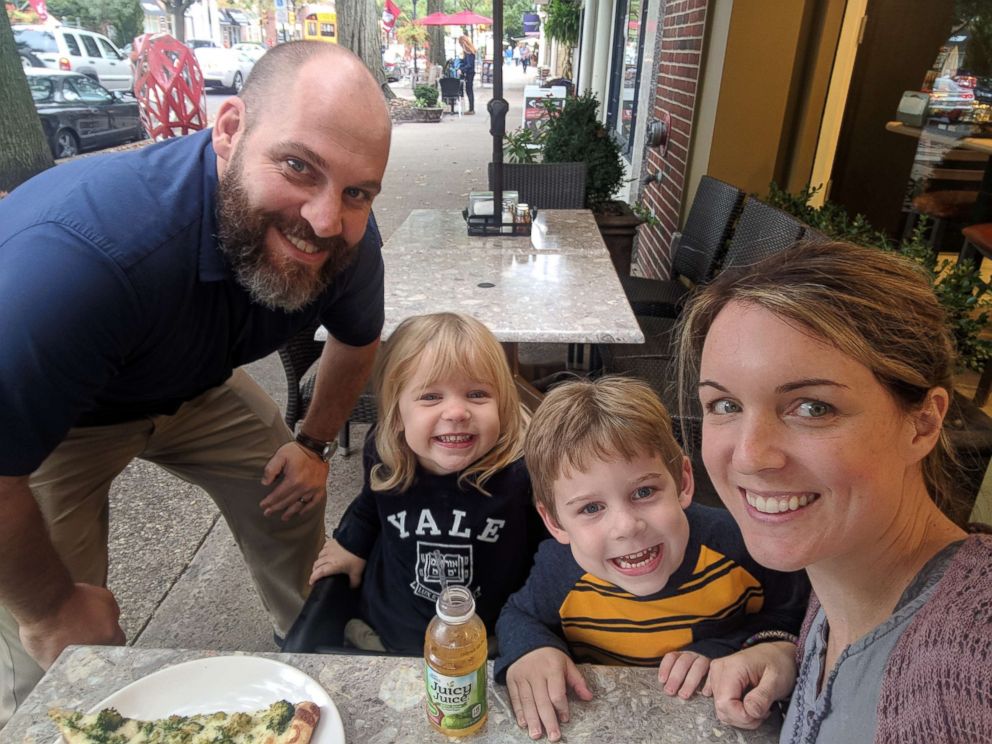 As a new teacher at the middle school — Mooney previously taught at a nearby high school for nine years — she didn’t tell anyone about her mission.

"I just came in to the first day of my career at this new building with people I did not know at all and decided I was just gonna wear the same thing every day, and see how long it took for people to notice," she said.

At first, she had two copies of the same dress that she planned to wear throughout the duration of the project, but now she is halfway through and only has one.

She gave the other dress to a woman she met while on a service trip to Africa in October. The woman didn’t have much and was in need of clothes, she said.

The two agreed that the woman would wear the dress during her travels — possibly sharing it with others — and continue to spread the message of sustainability.

So I've had a second dress all along, just in case I needed it to get through my 100days. Today I sent it into the universe by way of Gaby, whom I met @shantiuganda . Gaby is a #globalhealthcorps fellow in Uganda and she graciously took my dress! She is going to share it with others on her travels and spread the beauty of its message to other women: we aren't what we wear, we are what we do ... and our fashion choices have costs. Today I learned that even when we have very little to get us through (in my case, 2 dresses!), giving and sharing can make us feel whole and rich. #OneOutfit100Days #shantiuganda #womenshealth #maternalhealth #womenactivists #slowfashion

Other than passing one of the dresses off to someone else, Mooney hasn’t had any issues with her initiative so far. If anything falls off or the dress gets a rip, she simply fixes it with her sewing machine.

Back to school night. I wore this really great dress. #day11

Mooney was curious to see how people would react — if they would ask her about her choice of clothing or if they would even say anything at all.

Aside from seeing what her students and peers would think, Mooney also wanted to see how she would respond to the challenge herself.

"I don’t really usually think of myself as somebody who really cares that much [about] what people think, but at the same time I did feel self-conscious after a few days walking down the halls saying 'Hi' to the same people, who I knew didn’t really know me but were probably noticing that I was wearing the same thing every day and they just probably didn’t want to be rude and ask me," Mooney said.

"That was the feeling that I got," she added.

I'm a huge fan of aprons this year. This one, from my local antique store?????? Expressing yourself doesn't have to end for the sake of your morals. Just do it more creatively?? #day43 #OneOutfitChallenge #OneOutfit100Days

Sure enough, some of Mooney's peers eventually got to know her better, and they told her that others had asked them about Mooney's peculiar style. Students, however, asked her directly.

"My students — some of them didn’t notice at all, which I guess is expected because, you know, I’m just a teacher," she said. "But some of them noticed on the second day and asked me why. ... They see me more, I guess. I think maybe being that they’re 12 and 13, they’re just a little more curious and bold. I think my colleagues just didn’t want to be rude and ask me to my face."

She explained the concept to those who asked but resolved to stay quiet about it otherwise.

If she had done the project at her old school, many of her former colleagues would have said something about it, she said.

#day34 was marked by a gorgeous apron. I bought this new and locally made from a market in Kampala, Uganda. It's definitely going to spice up my #OneOutfit100Days dress for a while! Why did I buy new this time? Uganda, home to 40 million people, is the continent’s top importer of used clothing, according to a study commissioned by the nonprofit CUTS International. This is part of a complicated history in a country that used to have no problem clothing itself, but now finds itself responding to the effects of neo-colonialism. University of Toronto economist Garth Frazer compares the secondhand clothing industry to food aid, which helps to fill empty bellies “but at times clearly harms African food producers.” Interesting. Things are not always what they seem, especially in fashion. Find out where your clothes are coming from. Find out how your purchases affect your world.

Mooney took to social media to help clarify her message and appeal to her students on a platform they know well.

"I made the Instagram because I wanted to make sure that the message and ideas behind it were articulated by me," she said. "I knew that kids operate on Instagram, and before this, I really was not much of an Instagrammer. I just made an account for them, so that they could go there and say, 'What is this all about?' and would be able to find out the answer from me that way."

One reaction some people had about Mooney's project was about her personal hygiene. "Some people will say some things like, 'Do you wash it?'" she said.

"That’s kind of their first go-to question, and I just tell them: this is not a project about hygiene. I wash it as needed. I come to work clean. Lots of people wear uniforms and they are not assumed to be dirty. But the minute that there is no uniform policy and somebody voluntarily chooses to wear the same thing everyday, suddenly that’s not socially acceptable, and I think that element of our culture is worth thinking about."

"It really comes down to vanity — the only reason we’re living like that. We end up inadvertently feeding into the fast-fashion culture, which is not good for the planet or our self-health."

For many of us, we have days we feel better about how we look than others. Somehow, even with the same daily outfit, I still have those days!! Today I felt great, for whatever reason. I finally broke out the black winter tights and put on a fair trade scarf from @tenthousandvillages and shamelessly asked a kind soul to take a picture for my daily countdown Instagram.?? It seems all we may really need is a small, low impact item to make us feel great!

To those who view clothes as a form of creative expression, she said she loves fashion and completely supports designers.

"It is, in a way, more of a creative challenge to figure out if you can express yourself in a way that is eco-friendly and maybe a little more minimalist," she said.

"Can you do it with less? Can you do it by reusing what you have? By sharing with other people? Why can’t we share the clothes we’re tired of with the people in our circle instead of getting rid of it and buying something new?" she said.

She added that there are a lot of ways for us to express ourselves creatively while still being mindful of the environment.

Now that Mooney is doing this project, she’s become more conscious of what she’s buying for her children as well, she said.

"My little one’s have always worn thrift or consignment clothes," she said. "I’m not spending a lot of money on their clothes because they grow out of it so fast."

"Dress comfortably", we were instructed. I know many of my colleagues had some anxiety this morning about what that would mean for them. Even I worried, knowing exactly what I would wear. Today we don't have students... We have a healthy living professional development workshop. I was signed up for yoga apparently. When I chose this dress I tried to pick something versatile. To be honest though, I wasn't planning to do yoga at work ?? #day21

She said her 4-year-old son eventually noticed her project about a month-and-a-half after she began. He wanted to join when she explained the idea to him.

He wore the same thing willingly for 10 days, she said, but then he spotted his "Hulk" shirt and quickly changed his tune.

10 days he made it in his one outfit challenge, and then he set his four year old eyes on the Hulk t-shirt his cousins grew out of and decided it was time for a change ?? To my surprise, he wasn't simply giving up ... He just wanted to wear this one every day instead! I shrugged and went with it. But the mom in me wasn't ok with a t-shirt in this weather so I took the sleeves off a shirt that didn't fit him anymore and sewed them on. Voila!! I'm not sure if I'm raising him to think outside the box or I'm just gonna make him a little odd????????

Mooney’s husband, who is also a teacher, is joining her in the challenge.

"I was really excited to have somebody doing it with me," she said.

Two students in her middle school also participated in the challenge, lasting around 20 days, she said.

Another young student in her district, second-grader Sofia, is working to complete the project as well.

Mooney wants everyone to question clothing norms in society.