By Jacqueline Laurean Yates
Video by Tamerras Leonard
Share —
Sign up for our newsletters to get GMA delivered to your inbox every morning!

There are teachers and there are change-makers. Vanessa Sefa falls into both categories.

The U.K.-based English educator has been teaching for three years, and currently works at The Archbishop Lanfranc Academy in Croydon, London.

She recently posted a heartwarming and eye-opening post on Twitter that has continued to resonate with many people.

"Black y8 girl came to me during break, crying, with her natural hair shrunk by the rain," said Sefa in a tweet.

She continued, "In under 15m & with the wrong tools I got the girl out with 2 rushed cornrows. Being black & that age, hair can mean so much. This is one of the many reasons we need more #Blackteachers #BHM."

Along with her post, she captured a before and after photo of 12-year-old student Purity Agyeman's hair. 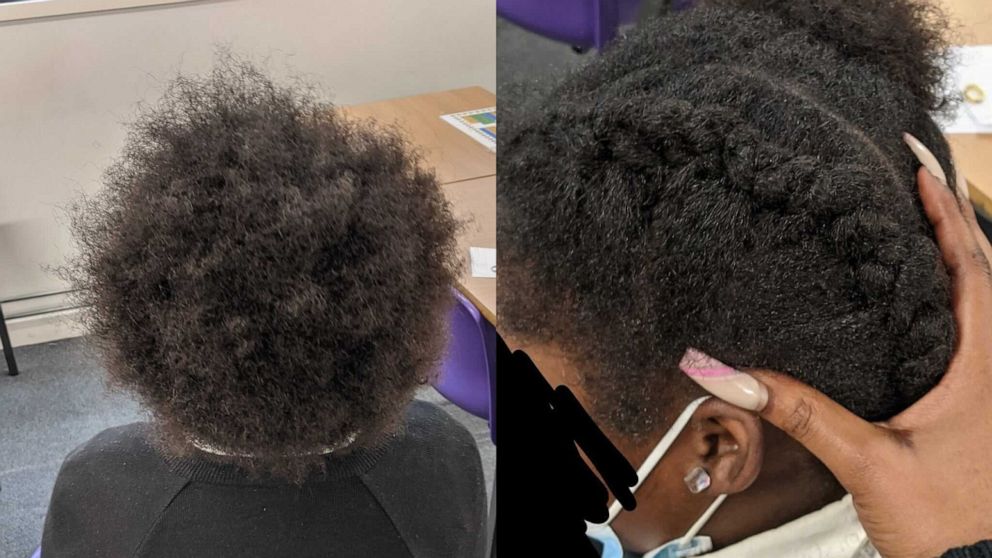 courtesy of Vanessa Sefa, Prince Agyeman
London-based teacher Vanessa Sefa turned one her student's smiles upside down offering to braid her hair after the rain "shrunk" her strands.

While Sefa told "GMA" that Purity is generally very confident with her natural hair and often wears it in natural updos and protective style, on this particular day, she was crying as she explained how heavy rainfall ruined her look.

"With tears in her eyes, she expressed that she wasn't going to go around school like this all day and would rather go home," said Sefa. "Her hair had started to shrink and consequently tangle up as a result of the friction from her hood and the rain battering it."

She added, "Purity explained the situation, took off her hood and asked me if I could braid her hair. Halfway through a doughnut, I froze, looked at her, looked at her hair and then at the time, then with 15 minutes until lessons begin said, 'OK, sit down, let's go.'"

Sefa said she only had a small-toothed comb so she used her nails to get the center part as sharp as possible and loosely finger detangled her hair before braiding it into two cornrows.

After getting her hair braided, Sefa said she felt relieved to see Purity smile and give her a hug.

"I was happy because my hair wasn't in a mess anymore," Sefa recalled her student saying.

Purity lives with her father as her mother died in 2018 when she was 9 years old. She opened up to Sefa that her knowledge of hair care is limited and mostly self-taught.

My mom had a student who would come in like this daily. My mom would take a few mins to fix her up. After a few days the mom sent a comb, brush and hairbows in the girls backpack.

Since sharing her experience, Sefa's post has received more than 50,000 likes along with an outpouring of stories from followers who have had similar experiences.

One Twitter user, @tyedyecarnation, said her mother had a student who would come to her teachers, like Purity did, daily. "My mom would take a few mins to fix her up. After a few days the mom sent a comb, brush and hairbows in the girls backpack," she said. "Turns out the mom was battling cancer and just didn't have the strength to do it."

Sefa explained that the intention behind her posting the message wasn't actually about the hair itself, and was more about highlighting the significance of Black teachers in a predominantly white sector. Less than 3% of teachers in the U.K. are Black, according to GOV.UK's 2021 Ethnicity Facts and Figures.

"I thought it was particularly poignant as Purity had come to my classroom on the first of October as this is Black History Month in the U.K.," said Sefa.

MORE: North Carolina woman learned to embrace her natural hair during the pandemic

"For anyone, irrespective of gender and race, hair is often a major part of one's identity," added Sefa. "Black hair particularly is often pre-loaded with political or revolutionary theories and sentiments, even when if the individual is unaware of the context or is simply existing. Black hair is sometimes seen as 'unkempt,' 'radical' and even 'dirty.'"

She continued, "Due to these multi-layered narratives, Black people are often hyperaware of what their hair says about them. This aside, Purity is entering her teens, some of her most formative years. Even if I thought she looked fine, I wasn't going to turn her away, pat her on the back and tell her she looked fine when her self-confidence was temporarily fragile. It wasn't my place, and a pep talk isn't what she asked for. I doubt anyone would want that response instead of actual help, if your outfit or makeup, for example, had been ruined by rain."

Sefa expressed having hopes that her post will inspire more Black and ethnic backgrounds to enter the field of education as more nuanced perspectives are needed to ensure that the education provided to children reflects everyone and the communities they serve.