Carly Miller, a neonatal intensive care unit nurse in Texas, spent six months by the side of one of her most critically ill patients, a baby named Conrad.

Now Miller, 27, a nurse at Texas Children's Hospital in Houston, gets to spend the rest of Conrad's life by his side as his godmother.

"I just feel very honored," Miller told "Good Morning America." "It's something I never expected and the fact that they wanted me to do that for him means the absolute world."

Miller first met Conrad on Dec. 15, 2021, shortly after he was born. Miller was the first nurse assigned to care for him when he was admitted to the NICU.

Conrad was born with a rare birth defect known as lower urinary tract obstructions, LUTO, which impacts his kidneys and bladder, according to his parents, Austyn Evans and Branden Williams.

Evans and Williams learned of the birth defect while Evans was pregnant. They moved from Florida to Houston when Evans was in her third trimester so they could receive specialty care at Texas Children's Hospital.

"It's a very bad diagnosis to get," Evans told "GMA." "A lot of these kids do not survive past zero or they just survive a few days past birth."

When Miller met Conrad in the NICU, the infant, she recalled, was medically sedated and on a ventilator, with what looked like dozens of tubes and wires keeping him alive. 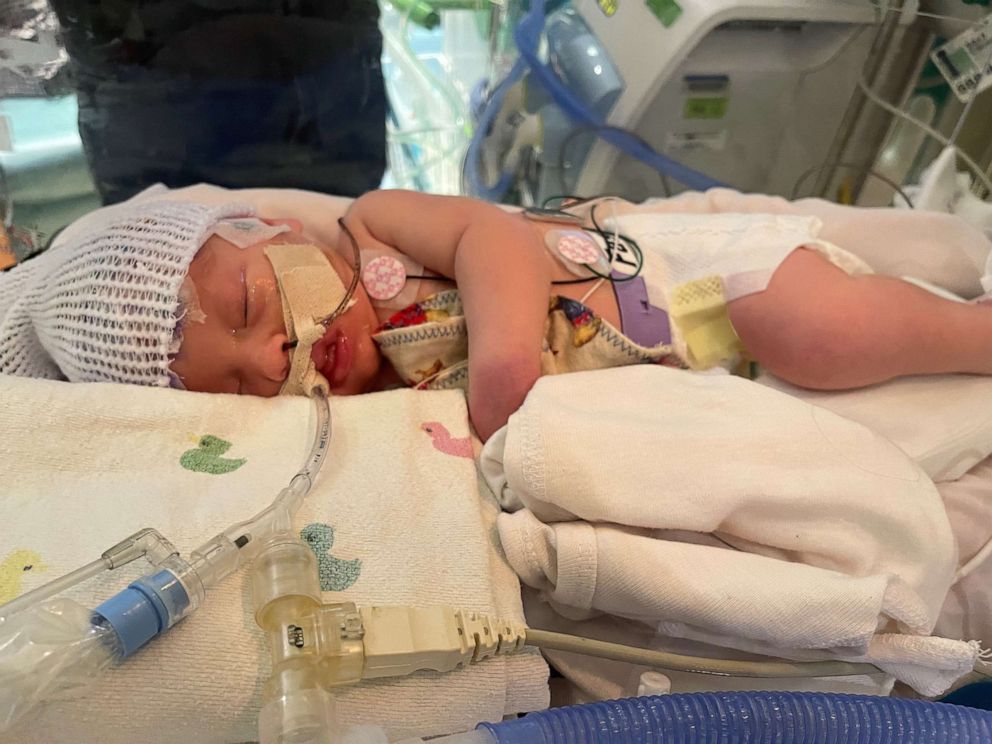 Amid all the medical equipment, what stood out to Miller were Conrad's adorable newborn cheeks, which Evans said left a lasting impression on her and her husband.

"One of the first things I remember Carly saying was not how sick my child was but how cute he was," recalled Evans. "She's talking about his cheeks, everything that I expected having a child would be like. Everything we thought we were going to get robbed of, she kind of gave back to us in a sense."

Editor's Picks
MORE: Couple gets engaged in NICU where daughter has spent the past 10 months

Over the next several months, Miller often worked the night shift, which meant that when Evans called to check on her son overnight, it was Miller who answered the phone.

"She never started a phone call telling me all the bad. It was always, 'Oh my gosh, he's so cute,' or, 'All the nurses think he's so cute,' and then obviously I'd get the medical report," said Evans. "It was such a small thing but it helped immensely." 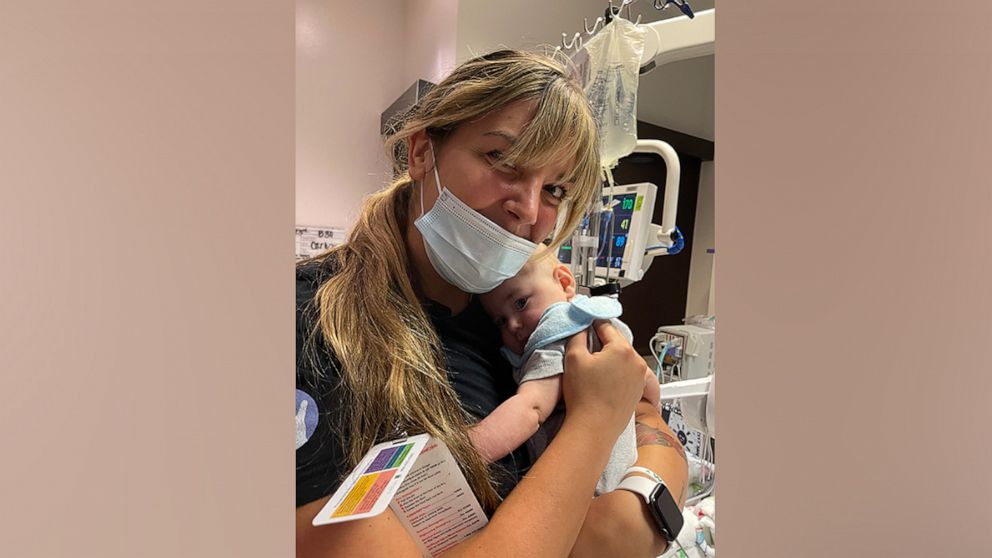 When Conrad was able to go on a state-of-the-art machine that allowed him to be on a type of dialysis, Miller became an expert on the machine so she could continue to care for him, which was a request of the parents.

"She said, 'This is new to me too so I will be learning with you,'" recalled Evans. "And other nurses that would have Conrad on other nights would say, 'Carly kept coming by every night checking on her baby,' which I really appreciated because she didn't have to do that."

Both Miller and Evans said that Conrad quickly began to recognize Miller's voice and know when she was in the room.

As a first-time mom, Evans said she learned all she could from Miller, both the medical tasks she performed on Conrad and the day-to-day parenting things like how he liked to be swaddled and how best to rock him to sleep. 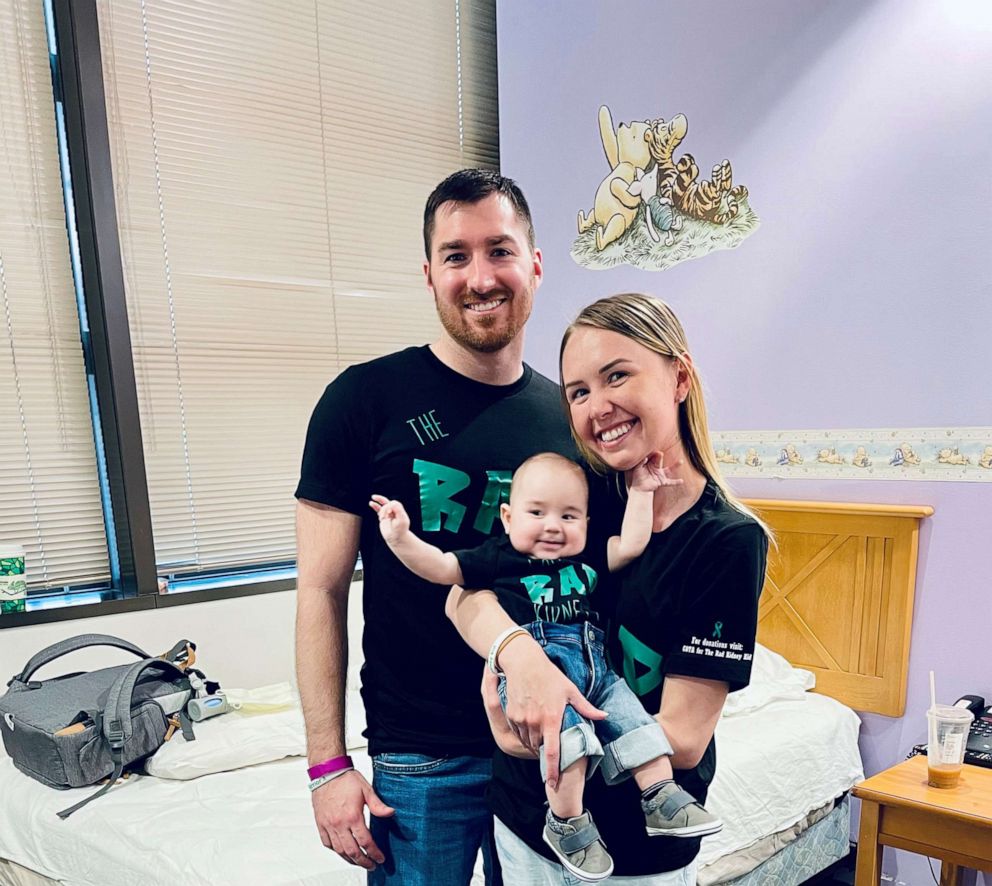 Miller said that Conrad would often be the only patient she cared for on her shift because of his complex needs, which allowed her to bond with him as well as Evans and Williams.

"It gave me such a big chance to get to know them a lot better and really build that relationship that comes with our unit and these complex kiddos," she said. "They're there for so long that you really start to become attached and just very concerned for their well-being. You worry about them when you go home."

When Conrad was discharged from the NICU in June, Evans said she and her husband knew that Miller would remain in their family's lives.

"I think sometimes you meet people in your life and something extraordinary happens, you build a lifelong friendship," she said. "For us it happened at Texas Children's NICU."

Evans continued, "We could not do it without Carli, but the coolest part is her relationship with Conrad. She has been there for him since day one and there's no one else that has other than myself and his dad." 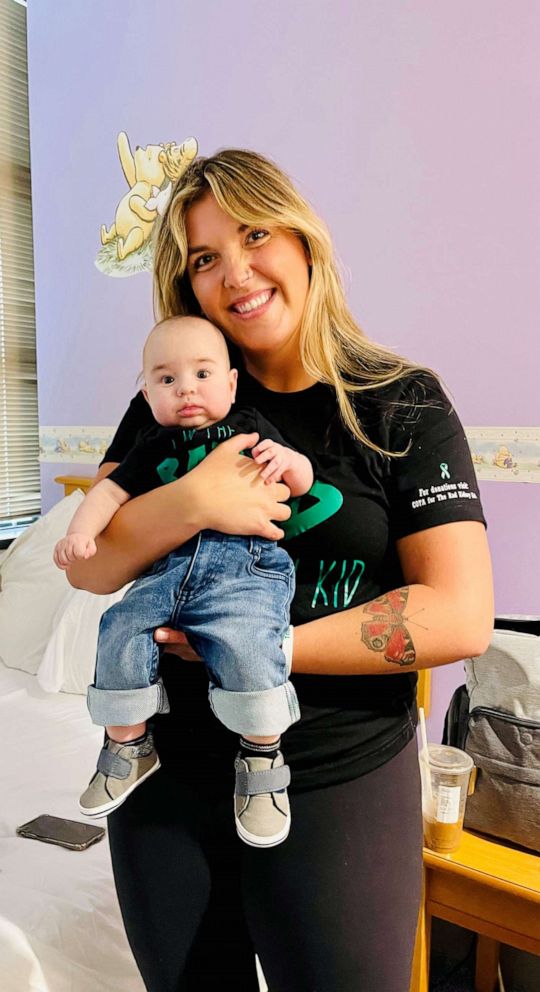 As they settled in at home, Evans said she and her husband knew they wanted Miller to be their son's godmother, saying, "Her love for Conrad and for us didn't stop."

MORE: Inside the 48-hour rush to evacuate NICU babies after Hurricane Ian

To make the ask, the couple presented Miller with flowers and a card from Conrad that included the handwritten note, "Will you be my godmother?"

"I just looked at her and said, 'Are you serious?,'" Miller said, referring to Evans. "She said I could take my time to think about it and I said, 'Why would I take time?'"

Just as she did in the NICU, Miller has helped Evans and Williams as they navigate complex at-home care for Conrad, who is on dialysis 10 hours each day and has a gastrostomy button for feeding.

She has also been there to see him reach new milestones and to share laughs, even arranging Conrad's first-ever playdate this summer.

"I can't put it into words. Carly and Conrad have such a bond," said Evans. "She will never let him settle. She treats Conrad like he is any other kid and I love that."

Miller said she will be by Conrad and his parents' side as they face the next step in his health journey, undergoing a kidney transplant.

"His kidney is now going to be the most important thing that we get him to because he is still sick, even though he looks so great," said Miller. "It was a stroke of bad luck that his kidneys didn't develop but they're taking it in stride, and just making his life the best they can possibly make it."

She continued, "I can't say it enough how lucky I am that they let me be part of this."