Sisters Brooke Dueringer and Ali White found out within one week of each other that they were pregnant.

"Ali actually found out first and she surprised us one night," Brooke Dueringer, 28, said of her sister's pregnancy announcement. "I had a feeling I was pregnant but I didn’t say anything because I thought I needed to know for sure."

She went on, "I found out about a week later that I was pregnant. Ali helped me with my pregnancy test and then we went and told our family. Everyone thought Ali had taken the pregnancy test for me and that it was a joke."

The dual pregnancies were no joke and the sisters, who live about 10 minutes away from each other in Augusta, Georgia, went through their nine months of pregnancy together, even sharing the same OBGYN and finding out they were both expecting girls.

"We got to share all the experiences together and [could ask each other], 'Has this happened to you? Did you experience this?'" said White, 25. "Our doctors’ appointments were the same day almost every time."

"Ali was kind of the guinea pig and would go into the [OBYGN] appointment first and then come out and tell me what was going to happen," added Dueringer. 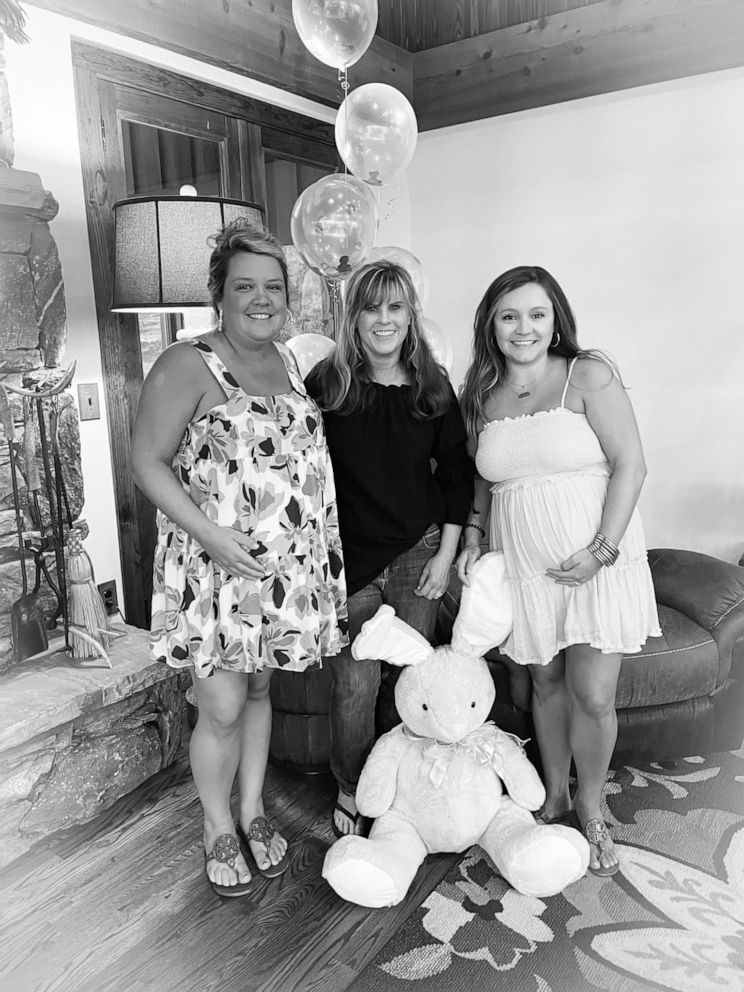 Dueringer and White said their family joked that maybe their daughters would share the same birthday, but the sisters never thought it would happen. Their due dates were five days apart.

Dueringer, who had the later due date on Aug. 19, said she really thought for sure it would not happen when she had to be induced two weeks early.

MORE: These 4 sisters are all expecting to give birth within months of each other

"Our mom kept saying, 'We can have their birthday parties together if they’re born on the same day,'" said Dueringer. "But I didn't think it would happen." 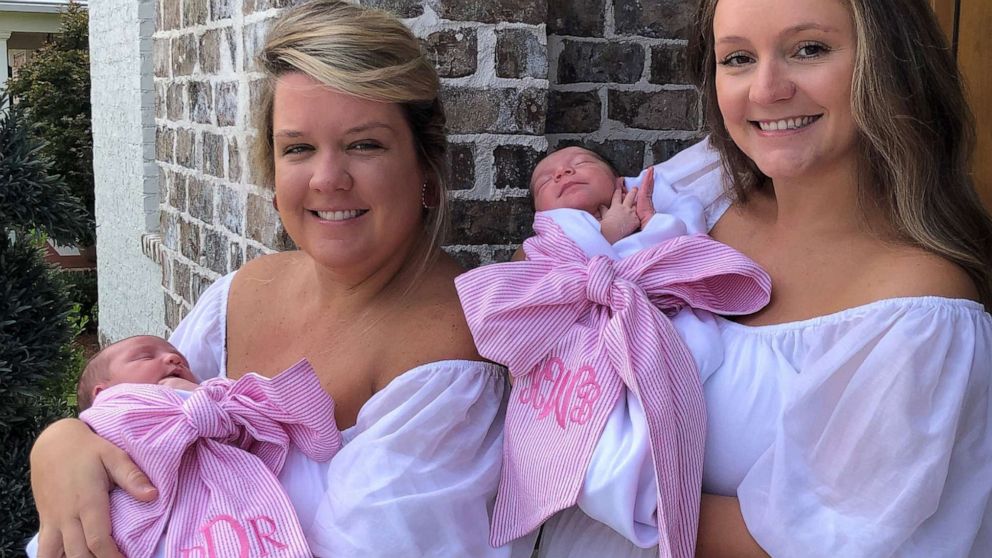 That changed when Dueringer was in the hospital awaiting delivery and White started experiencing contractions at home.

MORE: 2 friends who worked together learn they're biological sisters

Shortly after, White was admitted to the same hospital as Dueringer, and the sisters ended up two rooms down from each other in the labor and delivery unit.

"When they were wheeling me to my room, Brooke was already there and the nurse was like, ‘Do you want to peak in on your sister?'" recalled White.

Dueringer gave birth to her daughter, Palmer Rae, on Aug. 6, and said a nurse took her by her sister's hospital room on the way back to recovery.

"We had a group text going on and our husbands were going back and forth [between rooms]," said Dueringer. "Everybody tells us now the whole floor was talking about it." 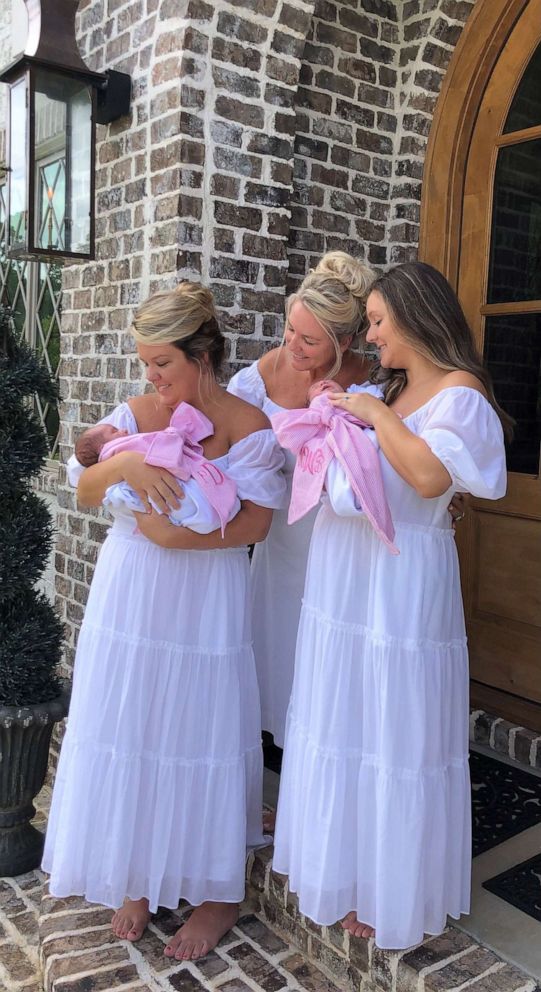 The newborns are the first children for both Dueringer and White, as well as the first grandchildren on both sides for both couples. 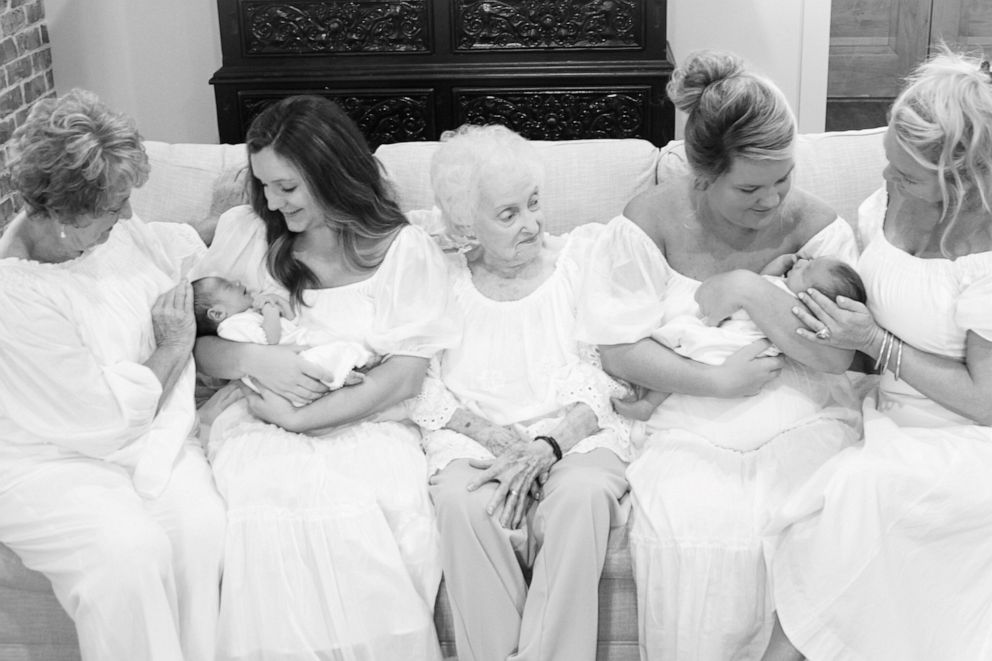 Courtesy Ali White
Sisters Brooke Dueringer and Ali White hold their newborn daughters as they pose with their mother, grandmother and great-grandmother.

And just as they shared their pregnancies together, Dueringer and White are now on maternity leave together, watching their daughters bond.

"It’s been nice to have somebody to pass the days along with," Dueringer said of maternity leave, adding that they are already picturing a lifetime of memories their daughters will have together. "Ali and I are very close so they’re definitely going to be very close."