When life gives you lemons, you sell lemonade -- and raise money to purchase diverse books for your community.

Amid protests happening across the country in the wake of the deaths of George Floyd, Ahmaud Arbery and Breonna Taylor, Gorman spent time educating her 7-year-old daughter, Josey, about the Black Lives Matter movement.The two created a sign that read, "Silence = Complicit, Black Lives Matter," which they displayed in front of their home.

"With everything that's been going on in terms of the Black Lives Matter movement, I realized that I need to be voicing my thoughts and opinions not only to my children, but to my friends in terms of making sure that we're all aware and educated about what's going on," Gorman told "Good Morning America."

But two days after putting up their sign, Gorman said they found it vandalized, washed with paint. 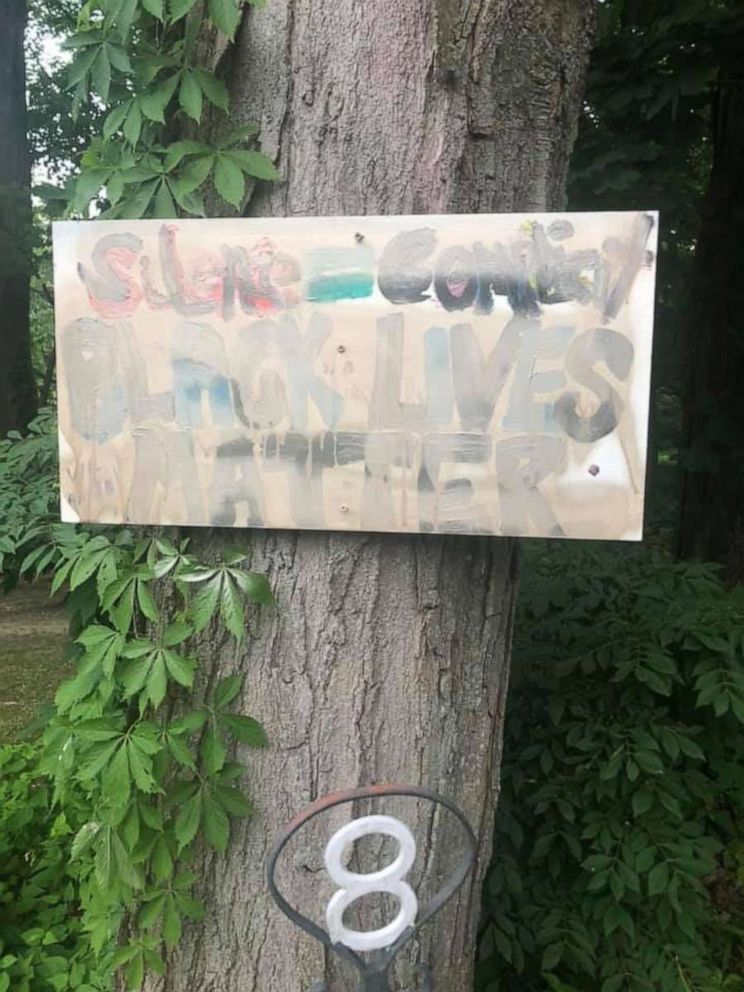 Amanda Gorman
Amanda Gorman's Black Lives Matter sign, vandalized two days after she put it on display in front of her home.

"It was a conversation we had to have with our children because they saw it," said Gorman. "It was clear that people might not be completely educated on what racial bias is and how deeply it affects our thoughts and perceptions on things."

When O'Donnell heard what happened, it stuck with her. The Gormans were new neighbors in Farmington, which is a predominantly white town, and she said she felt bad for what Gorman's daughter, Josey, must have been feeling to have her sign torn down.

MORE: Black man calls police to alert them he's doing his job. Here's what happened next

That's when O'Donnell came up with Lemonade 4 Change, a lemonade stand to help raise money to purchase diverse books to educate kids in the community about racism, diversity and racial equality.

"I think that around the country, towns that don't have much diversity, don't talk about diversity," said O'Donnell. "We know that kids, if they're exposed to anything at an early age, it becomes the norm. And if we don't, then they see something for the first time, it may seem strange or odd and they may not know how to deal with that."

The value of diverse books from an early age

Krista Aronson, a professor of psychology and associate dean of faculty at Bates College in Maine, said diversity and an understanding of "the marginalization and oppression of Black and Brown people across the world and within the United States" is essential because "the seeds for bias are planted at that early age in part because of the communities in which we live."

Aronson, who has spent more than a decade working with multicultural picture books and directing the Diverse Book Finder, an online resource for librarians and educators to help create diverse book collections in their schools and libraries, said that children start to see race as early as six to nine months of age. Through eye tracking tests, they're able to detect racial differences very early on, and by the age three, Aronson said children will tell you overt bias if you ask them.

"They also have learned not to talk about it because they've often been silenced around race, so they hold these attitudes and if we don't engage them, then we're not disrupting," she said. "If we don't share with them, if we don't get them to tell us these things, it can hurt as a parent, if your child tells you, 'no, I don't like that person.' They have too much melanin, which is how we talk about skin tone in my family. "

Aronson's research shows that cross-racial scenes in picture books can build acceptance, and through her role at the Diverse Book Finder, she works toward creating a national dialogue about diverse children's books and exploring their impact on inclusion and bias.

"In terms of books, it can be really important to expose infants to board books featuring lots of faces, people of color and real pictures," she said. "And to point out to them the different internal features of the face so that they can learn to pay attention to those features."

Where we go from here

In O'Donnell's and Gorman's community, the idea of a lemonade stand to raise money for diverse books gained support from the start.

Prior to their event, they set up a fundraising page, in case people couldn't physically make it to their lemonade stand due to the coronavirus pandemic. In a matter of days, they were able to raise more than $2,000.

"People were really excited to donate to bring these books on diversity and racial equality to the kids in our neighborhood," said O'Donnell. "It's just a simple concept. A cup of lemonade costs a dollar, but dollar for dollar for dollar, we could actually make change."

On the day of their lemonade stand event, which they held on Juneteenth, they also welcomed kids stopping by to make their own Black Lives Matter signs, just like Josey's.

Since the event, Gorman and O'Donnell have surpassed their goal of $5,000 to purchase at least six sets of 50 books for each of the four elementary schools and two library branches in their community.

O'Donnell has also shared an online tool kit for others to start their own lemonade stands.

With the money they've raised, Gorman's and O'Donnell's efforts to bring awareness about the Black Lives Matter movement, racial inequality and diversity to their community, aren't stopping with a lemonade stand. They are vowing to continue to shed light on these topics.

"I think there's more to do," said Gorman. "And conversations I've had with other parents, I think are just an opportunity for them to just kind of stop and think about what they can do."

"Regardless of where we are in our journey on this topic, I think we're all awakening and reaching," said Aronson. "To learn more and know more and expand our own identities within this arena as we grapple with all of these important issues… this is a lifelong journey and it's never done."