Members of Britain's royal family gathered Tuesday to celebrate the life of Prince Philip, who died at age 99 almost one year ago.

Queen Elizabeth led the royal family at the Service of Thanksgiving at Westminster Abbey for Philip, her husband of over 70 years.

The 95-year-old queen has battled health conditions over the past several months -- including COVID-19 and a brief hospitalization for what Buckingham Palace described as "preliminary investigations" -- so her attendance was all the more noteworthy.

The queen entered Westminster Abbey using a walking stick and holding on to the arm of her son, Prince Andrew, who last month agreed to settle a sexual assault lawsuit. The last time Andrew appeared in a public capacity with the royal family was last April, when the family gathered in London for Prince Philip's funeral. 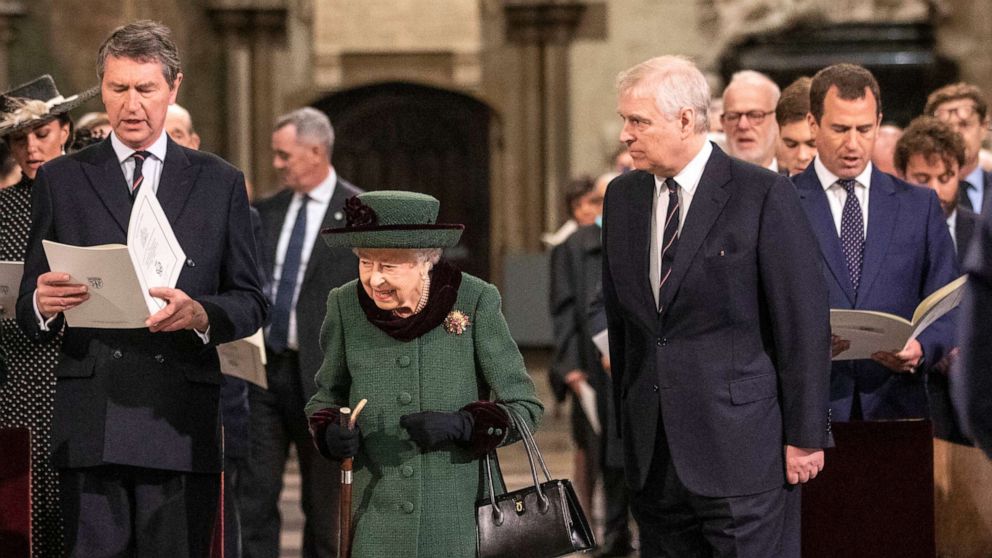 Joining the queen to celebrate Philip, in addition to Andrew, were the couple's three other children -- Princes Charles and Edward and Princess Anne -- and many of their grandchildren, including Prince William and his wife, Duchess Kate. 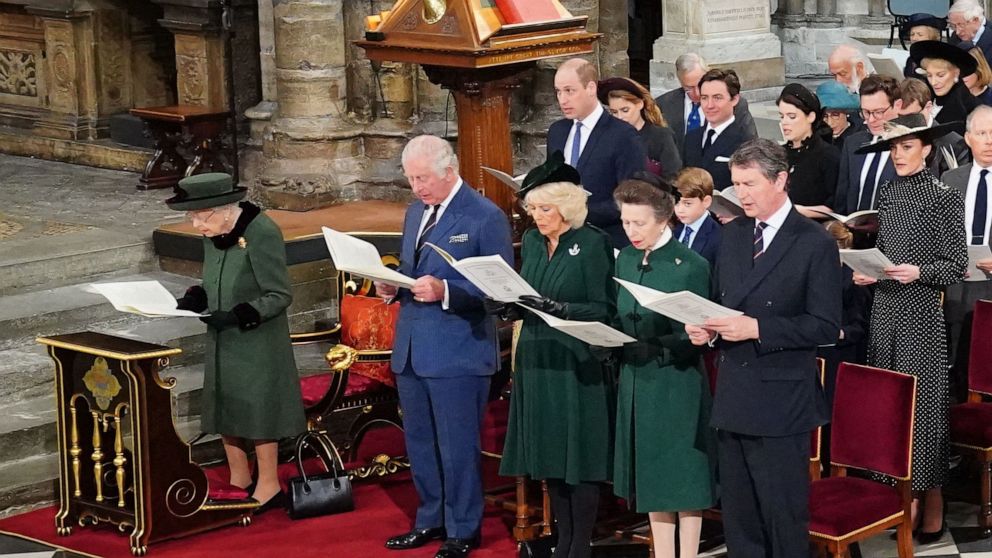 Several of the queen and Philip's great-grandchildren, including William and Kate's two oldest children, Prince George and Princess Charlotte, also attended the service. 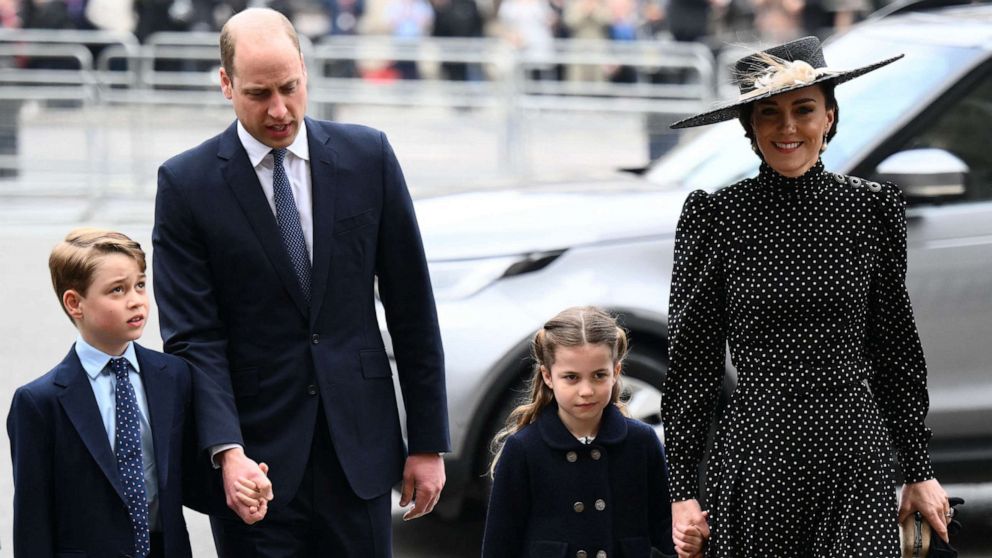 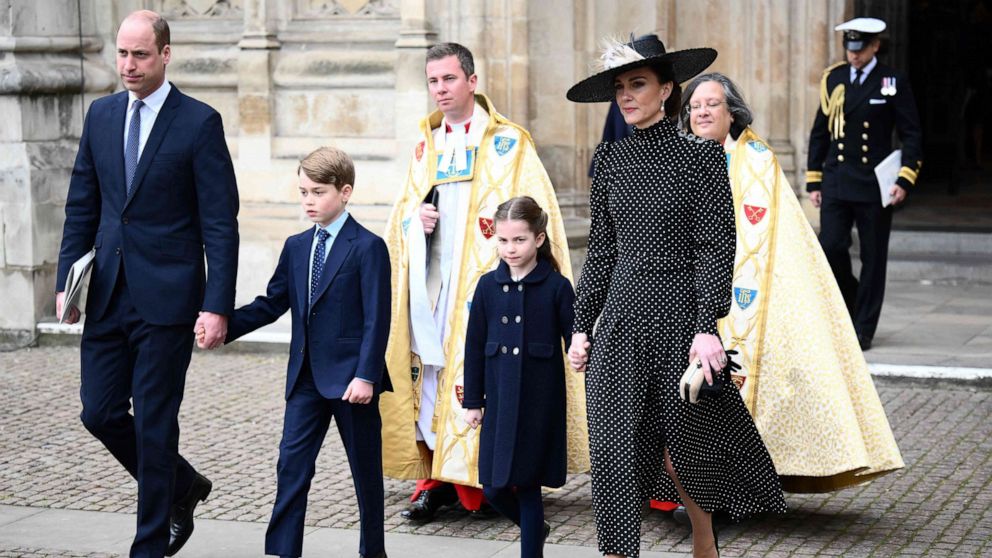 Daniel Leal/AFP via Getty Images
Prince William, Duke of Cambridge, and Catherine, Duchess of Cambridge and their children leave after attending a Service of Thanksgiving for Britain's Prince Philip, Duke of Edinburgh, at Westminster Abbey in central London, March 29, 2022.

Notably absent from the service was Prince Harry, who stepped down from his senior royal role in 2020 and now lives in California with his wife, Meghan, and their two children. A spokesperson for Harry, the Duke of Sussex, confirmed earlier this month he would not attend.

Harry, who did attend his grandfather's funeral last April, has expressed concern about his safety in the United Kingdom. Earlier this year, he filed a legal challenge asking that the U.K. government allow him to pay for his own police protection while in the U.K.

"The relationship between the Duke of Edinburgh and Prince Harry was always incredibly strong, and I know that no matter what for Prince Harry, the loss of his grandfather will have been immense, and the way in which he will remember the Duke of Edinburgh today will be very personal for him," said ABC News royalty consultant Alastair Bruce. "He's not here, but families are complicated places, and anybody who lives in one will understand that they can be those complicated places for Prince Harry. He'll be missed here." 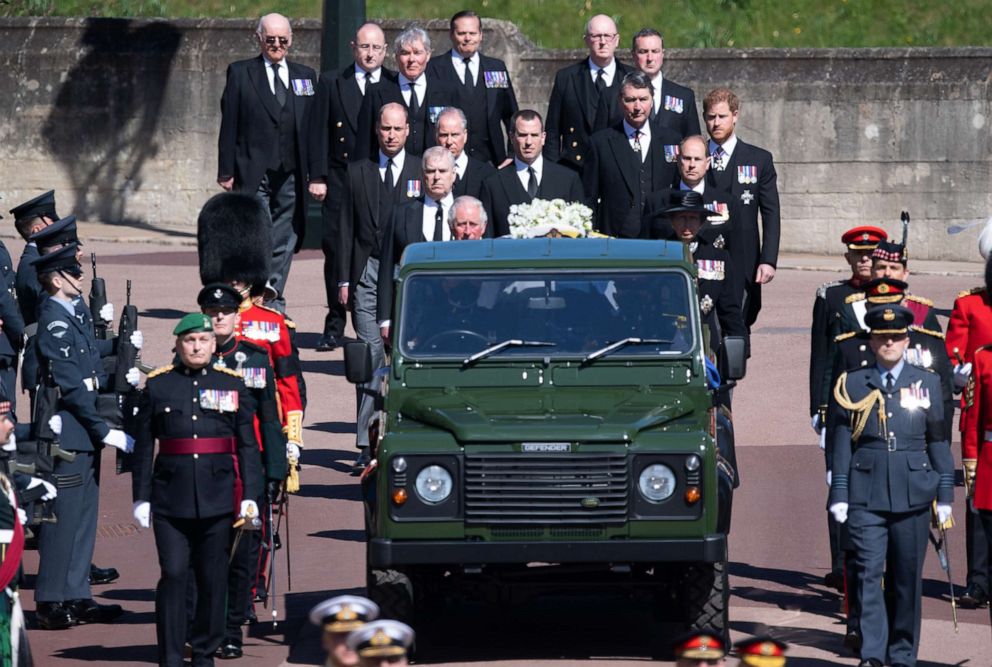 The Service of Thanksgiving that Harry missed Tuesday was a much larger affair than Prince Philip's funeral, which was held at St. George's Chapel in Windsor and had to be modified due to the coronavirus pandemic.

The queen was "actively involved" in planning this service for her husband, "with many elements reflecting Her Majesty's wishes," according to Buckingham Palace.

"She's been preparing for this memorial service here in the Abbey for some time, and I know she'll want to be here and so gargantuan efforts have been made to make sure she can," Bruce, who also attended Tuesday's service, said of Queen Elizabeth. 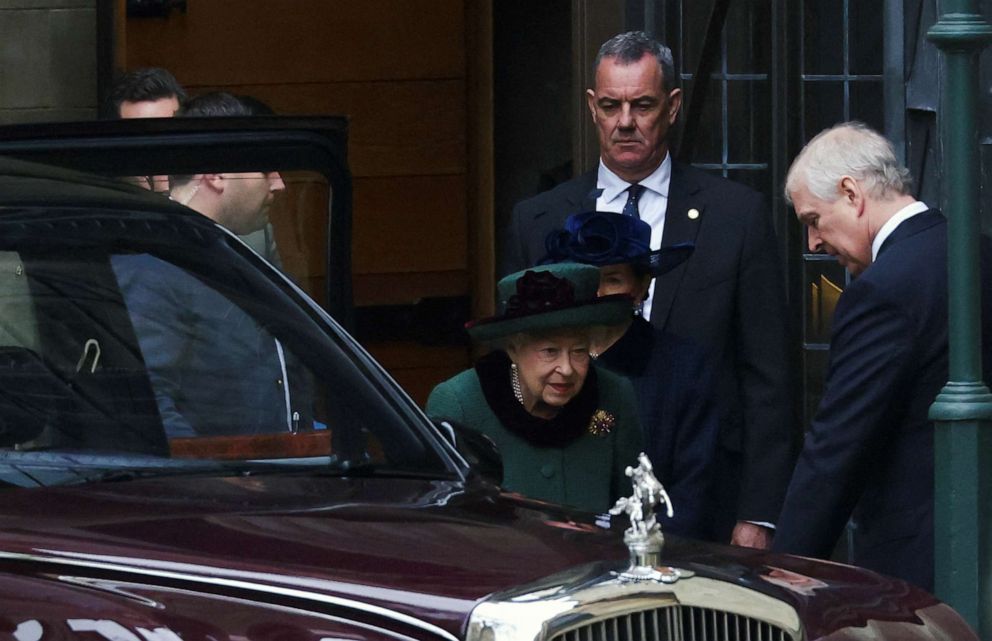 Tom Nicholson/Reuters
Queen Elizabeth and Prince Andrew, Duke of York, leave after a service of thanksgiving for late Prince Philip, Duke of Edinburgh, at Westminster Abbey, in London, March 29, 2022.

The service, led by the Dean of Westminster, was designed to "pay tribute to The Duke of Edinburgh's contribution to public life and steadfast support for the over 700 charitable organizations with which His Royal Highness was associated throughout his life," according to the palace.

Philip, the Duke of Edinburgh, was known as one of the hardest-working members of the royal family during his tenure alongside the country's longest-reigning monarch, Queen Elizabeth.

Tuesday's service also put a spotlight on a program beloved by Philip, the Duke of Edinburgh's Award, which he launched in the 1950s to encourage "young people to serve their communities" and "experience adventure," according to the royal family's website.

The only non-member of the clergy to speak at the service was Doyin Sonibare, a recipient of The Duke of Edinburgh's Award, according to the palace. 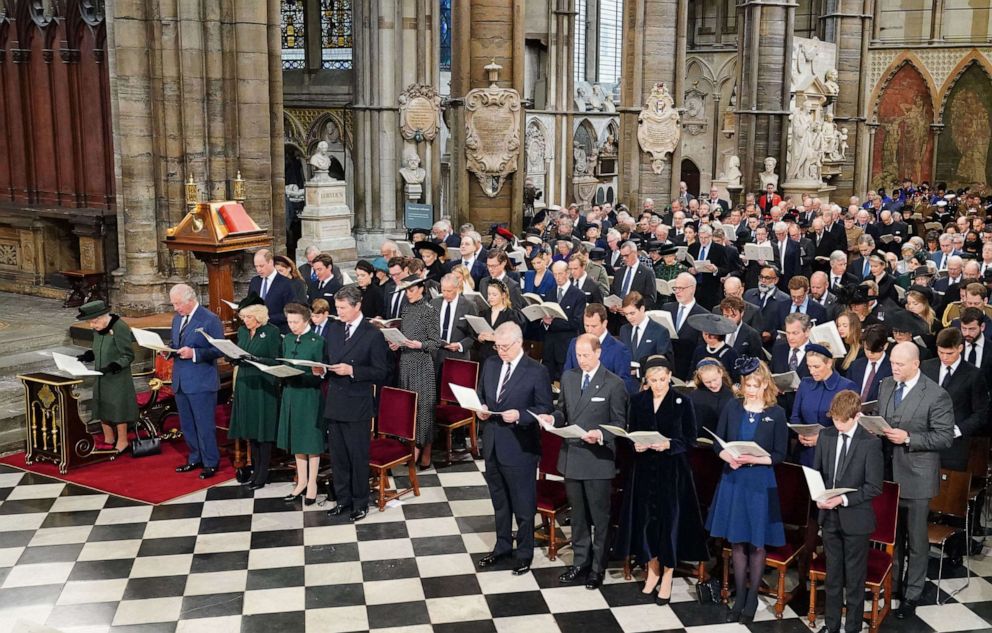 In addition to Philip's family members, the service was also attended by royals from around the world, including Spain, Sweden, Bahrain Romania, Serbia, Norway and Greece, according to Buckingham Palace.

Philip was born in Greece, in 1921, as the only son of Prince Andrew of Greece and Princess Alice of Battenberg. His family was exiled from Greece when he was a baby, and he spent some of his childhood in France.

He was known as Prince Philip of Greece until he became a British subject in 1947 and dropped his titles, becoming Philip Mountbatten. 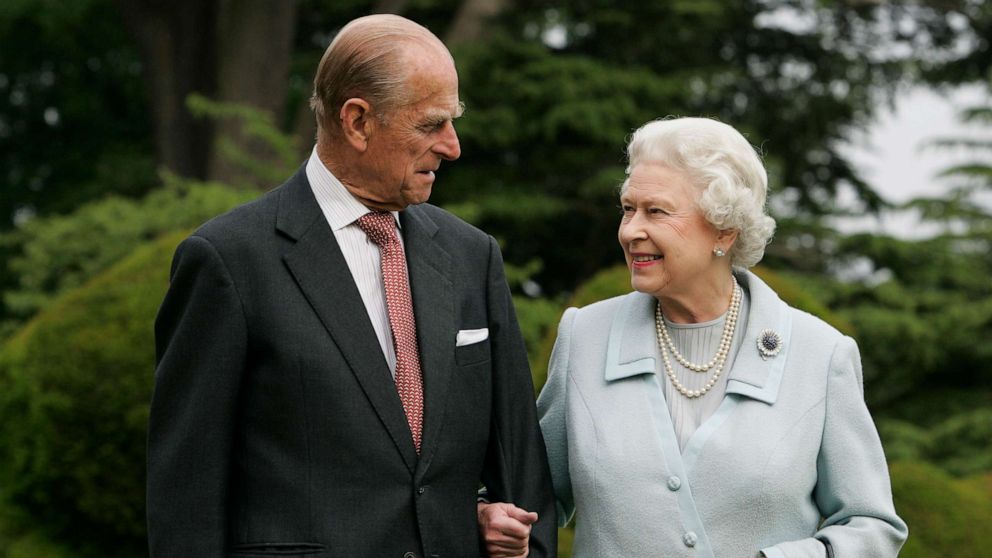 Upon his marriage to Elizabeth in 1947, he became the Duke of Edinburgh.

One decade later, in 1957, the queen made Philip a "Prince of the United Kingdom."