The late Queen Elizabeth II, who passed away Thursday, was the first British monarch to reach a Platinum Jubilee -- 70 years on the throne.

Over the course of her history-making reign, the 96-year-old queen left a legacy as a pioneering female leader on the global stage and family matriarch. She also became a fashion legend with her reliably bright outfits.

The colors of the rainbow-style outfits were a trend started by Her Majesty as a courtesy to the public, according to Sali Hughes, a U.K.-based journalist and author of "Our Rainbow Queen: A Tribute to Queen Elizabeth II and Her Colorful Wardrobe."

Getty Images
Queen Elizabeth wearing bright colored coats with matching hats in a set of photos at various events in 2018 and 2019.

"The queen tends to always wear one color because she feels that if people are queuing for many hours just to see her, the courtesy she should show them makes it so they can see her," Hughes told "Good Morning America." "Those in the audience will be able to pick her out and say they saw the queen."

That was also the reason why you likely wouldn't have seen the queen wear a green coat and hat to a garden party, for example, where she would run the risk of blending in.

She always picked contrasting colors and ones that are diplomatically and culturally appropriate to the event, according to Hughes.

"So much thought goes into it and nothing is an accident," she said. "If anyone thinks they’re overthinking the queen's fashion, they’re not, because they would never be able to think about more than the queen and Angela Kelly."

Kelly was the queen's personal fashion expert. She started working for the royal family after the queen met her at the home of the British ambassador in Germany, where Kelly worked as a housekeeper at the time. 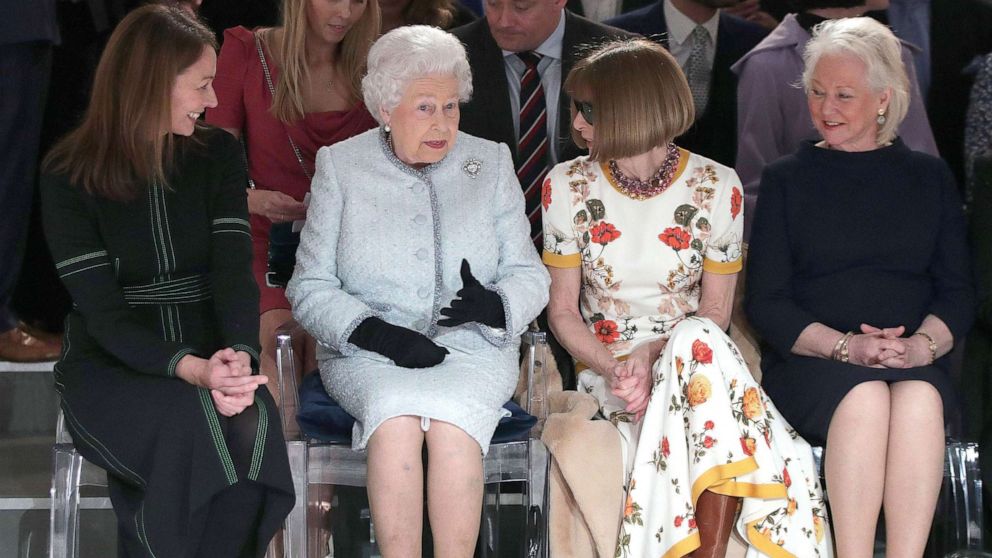 Kelly worked her way up the ranks and designed many of the queen's clothes and hats, according to Hughes. The pair worked together, relying on no outside stylists, and pored over every detail of each event Queen Elizabeth attended.

"Everything is considered," said Hughes. "All the clothes are weighted down with metal weights, fabrics are packed up for several weeks to make sure they don’t wrinkle and new shoes are worn endlessly around the palace to break them in."

Speaking of shoes, those and her purse were the only accessories where Elizabeth broke away from her monochromatic look. She always wore patent block heel shoes and carried a handbag, both in white or black, depending on the season. 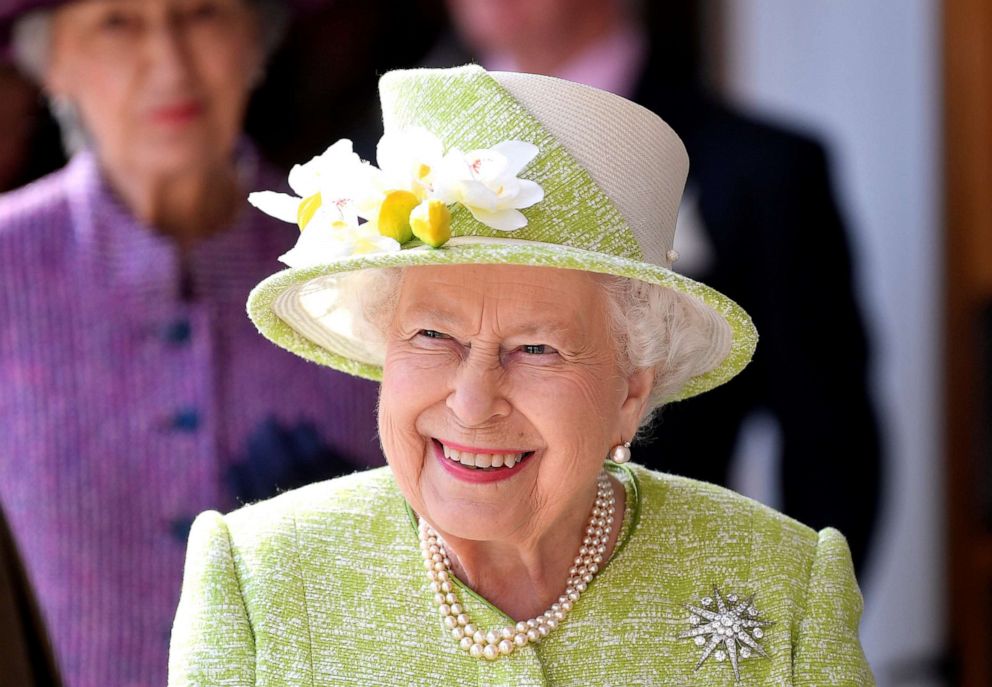 "She knows what works for her," Holmes said. "There is something so refreshing in her color choices, especially as so much of fashion has veered towards neutral shades. The queen’s style is very much her own, and she wears it well."

When the royal family made appearances together, like at Trooping the Color, their outfits were planned around the queen's wardrobe choice, according to Hughes. 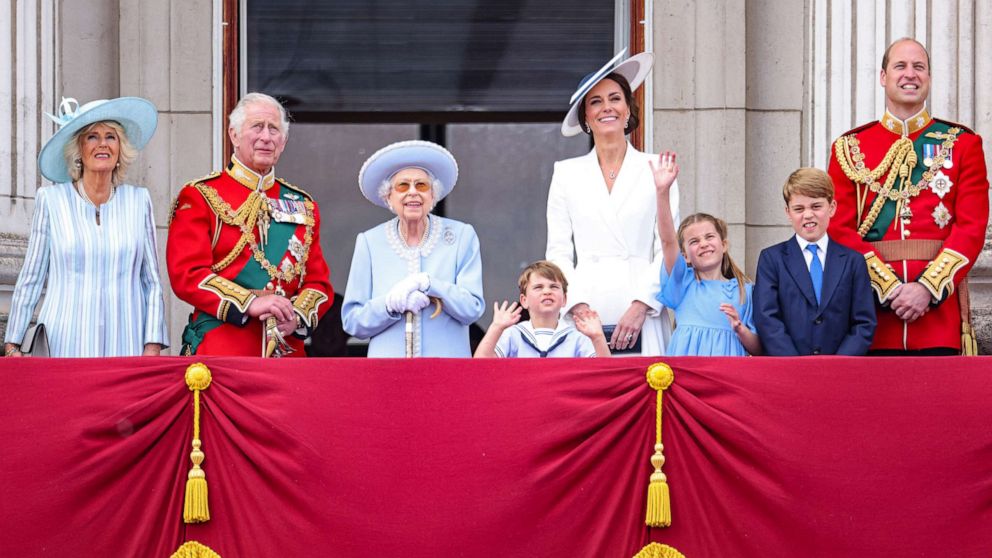 "Whatever the queen is going to wear, everyone works around that, not because she rules with an iron fist but because the monarch has final say," she said. "She wouldn’t approve their outfits but they would know what the queen will wear."

With those details in mind, here are some of the queen's most colorful looks over the years. 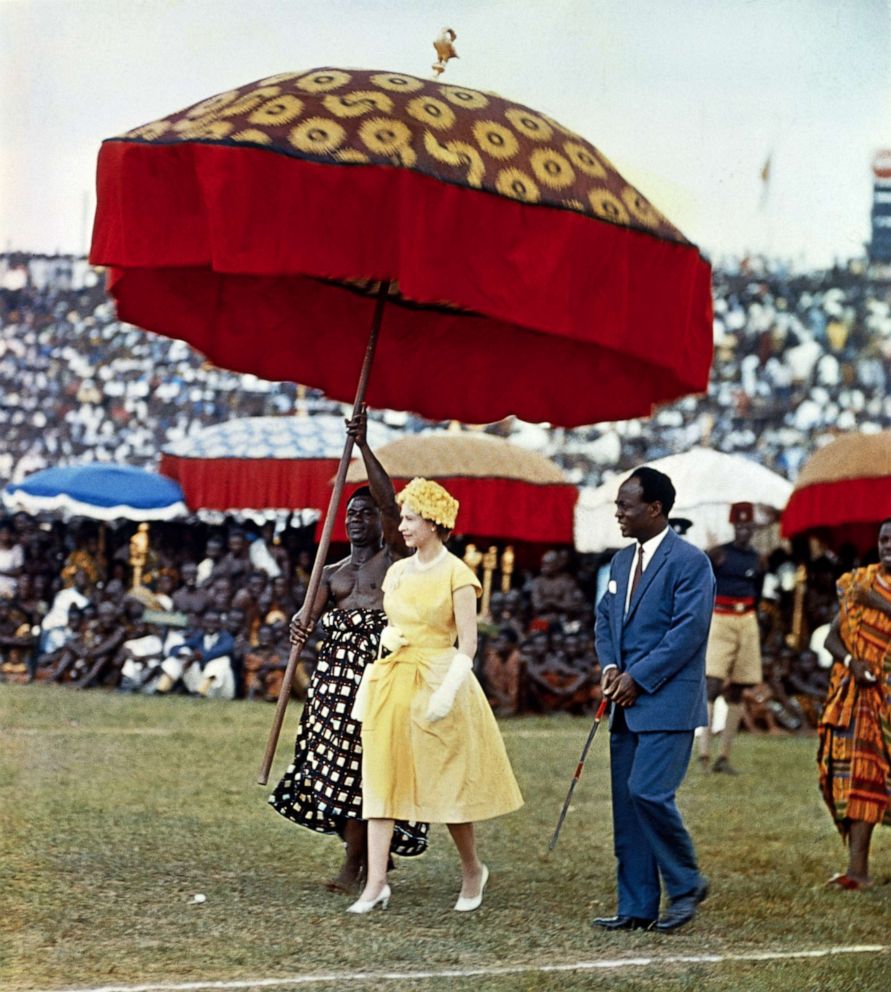 Bettmann Archive/Getty Images
Queen Elizabeth II makes her way underneath a large, colored umbrella, to a dais to watch the Durbar of the Ashanti Chiefs, at Kumasi Sports Stadium in Ghana, Nov. 15, 1960. 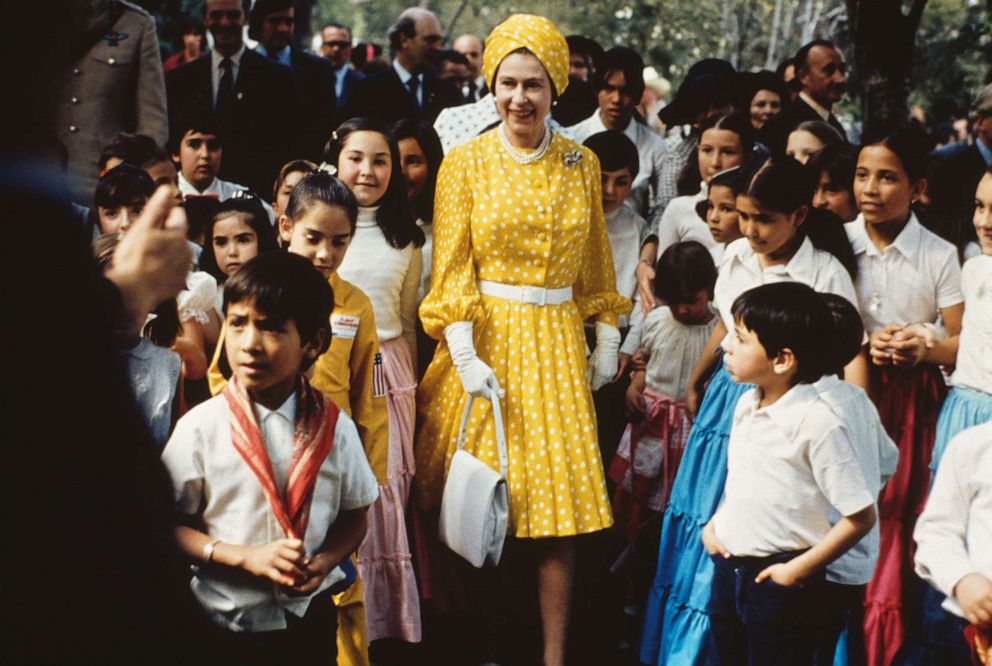 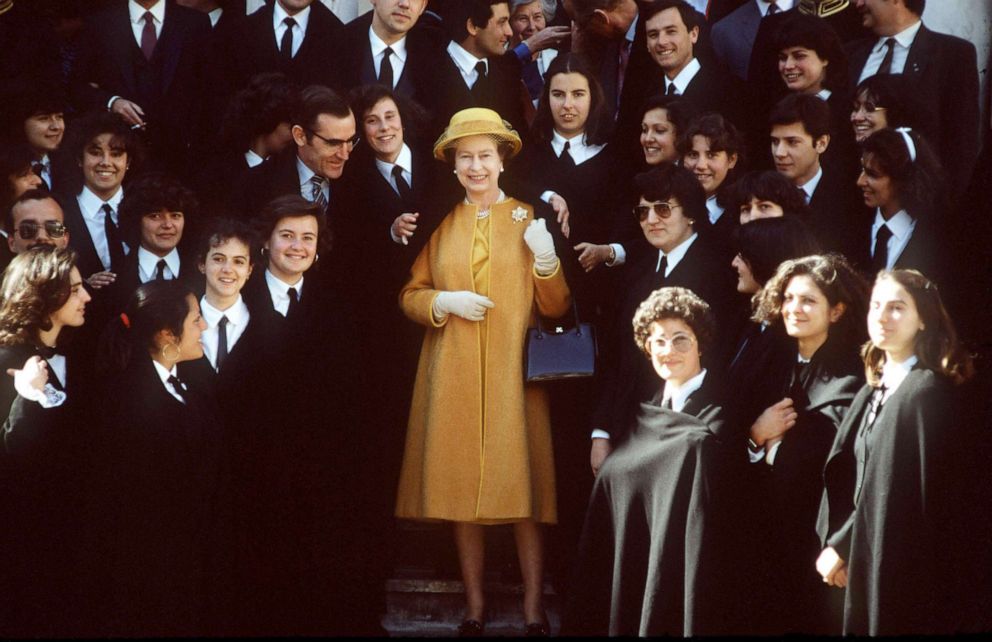 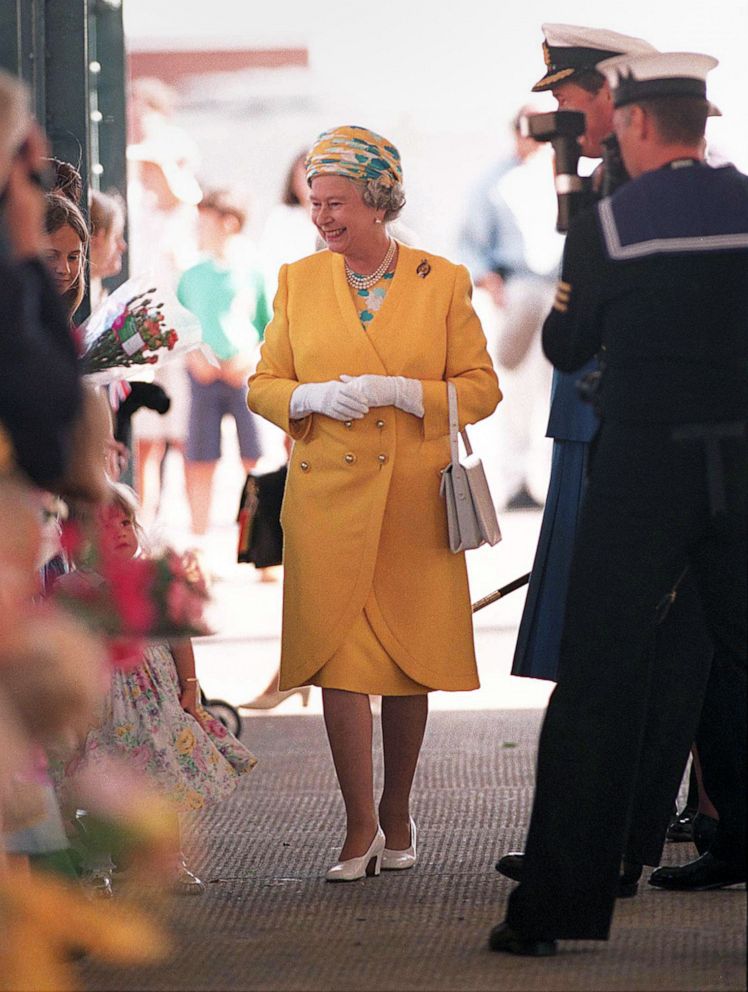 Tim Graham/Getty Images
Queen Elizabeth II greets people on her way to board the yacht Britannia for a cruise, Aug. 7, 1996, in Portsmouth, England. 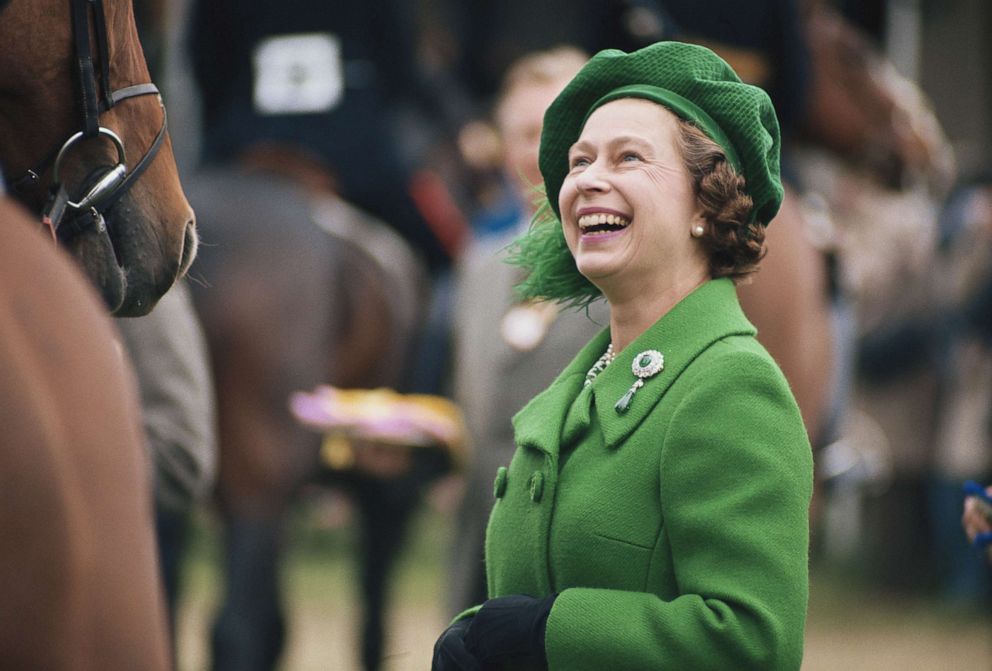 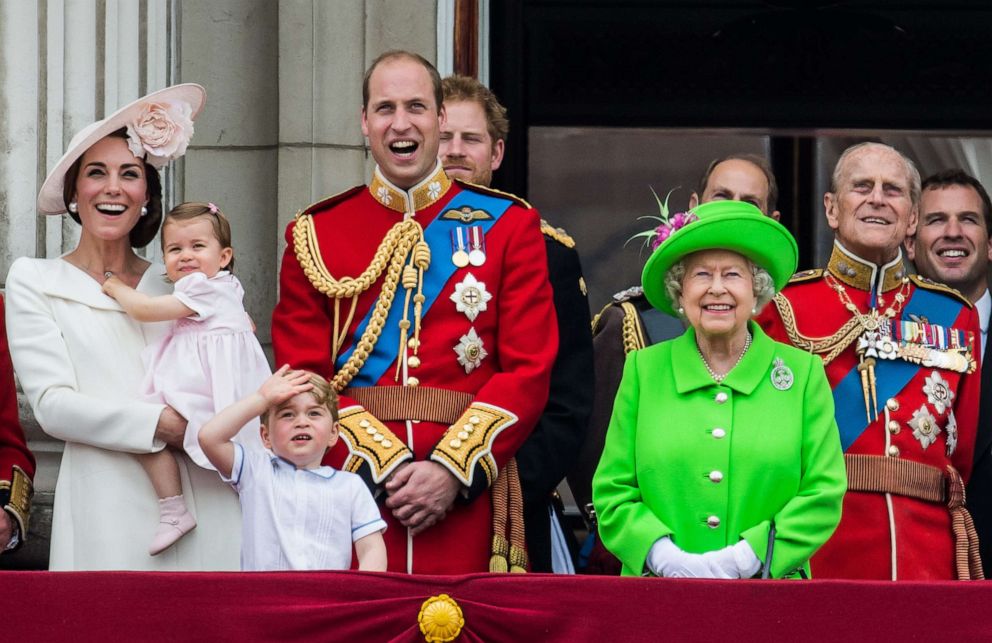 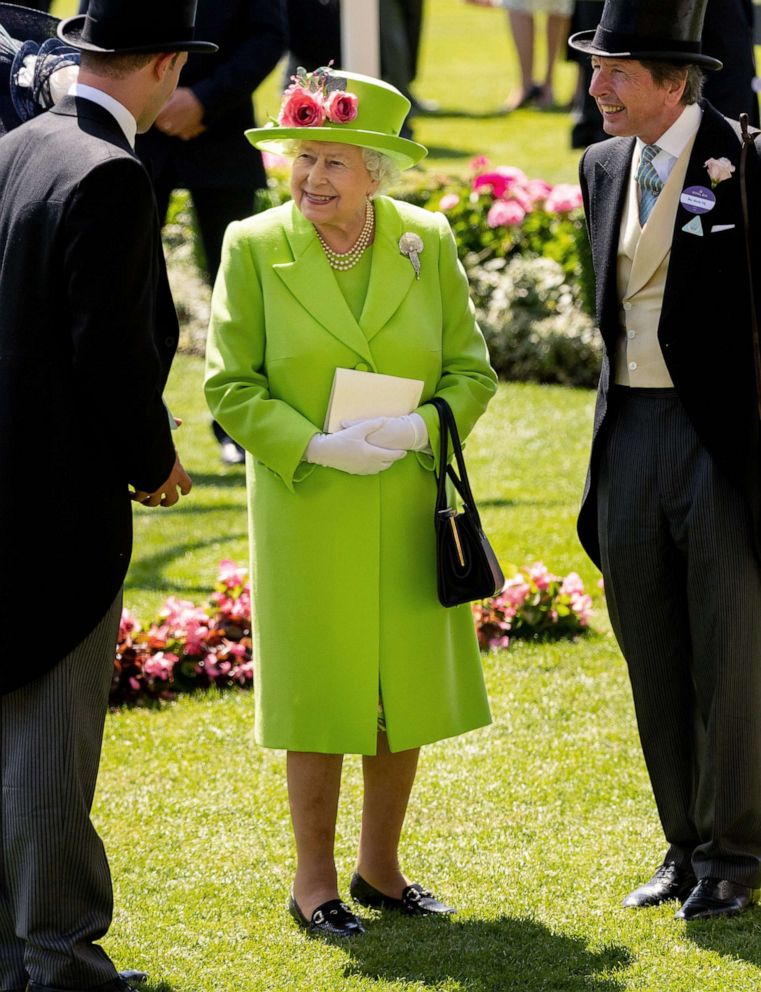 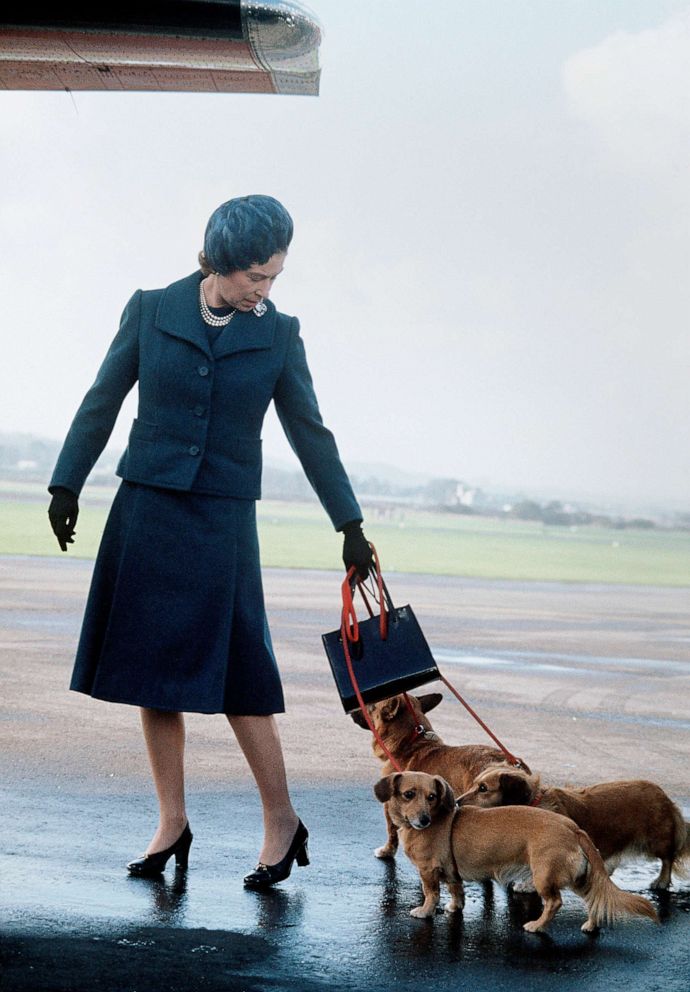 Anwar Hussein/Getty Images
Queen Elizabeth ll arrives at Aberdeen Airport with her corgis to start her holidays in Balmoral, Scotland in 1974. 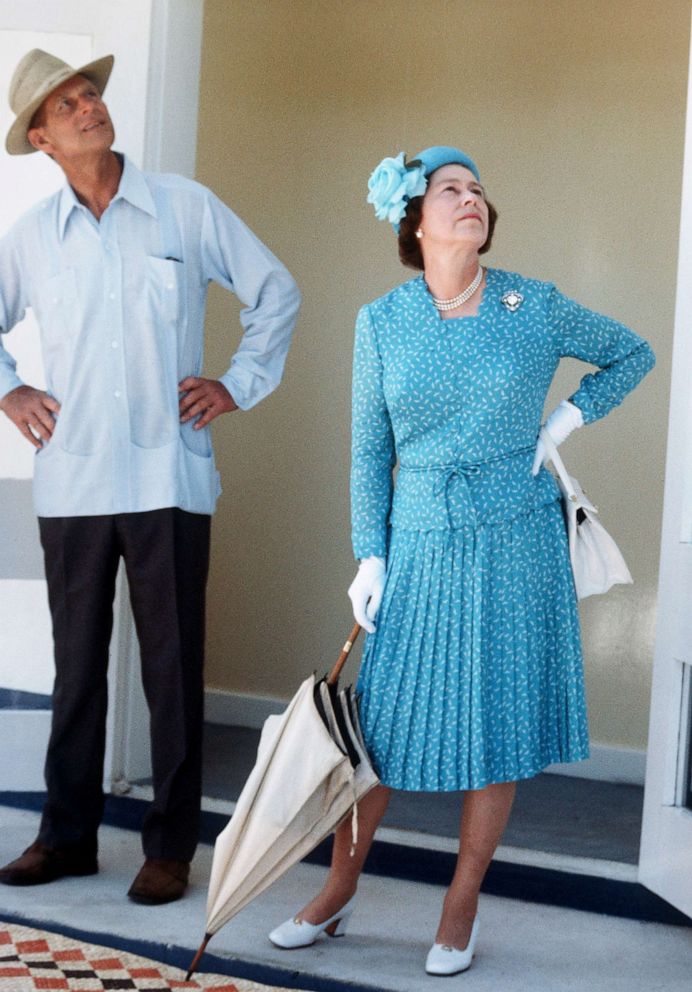 Anwar Hussein/Getty Images
Queen Elizabeth II and Prince Philip, Duke of Edinburgh visit the Solomon Islands during a tour of the South Pacific in October, 1982. 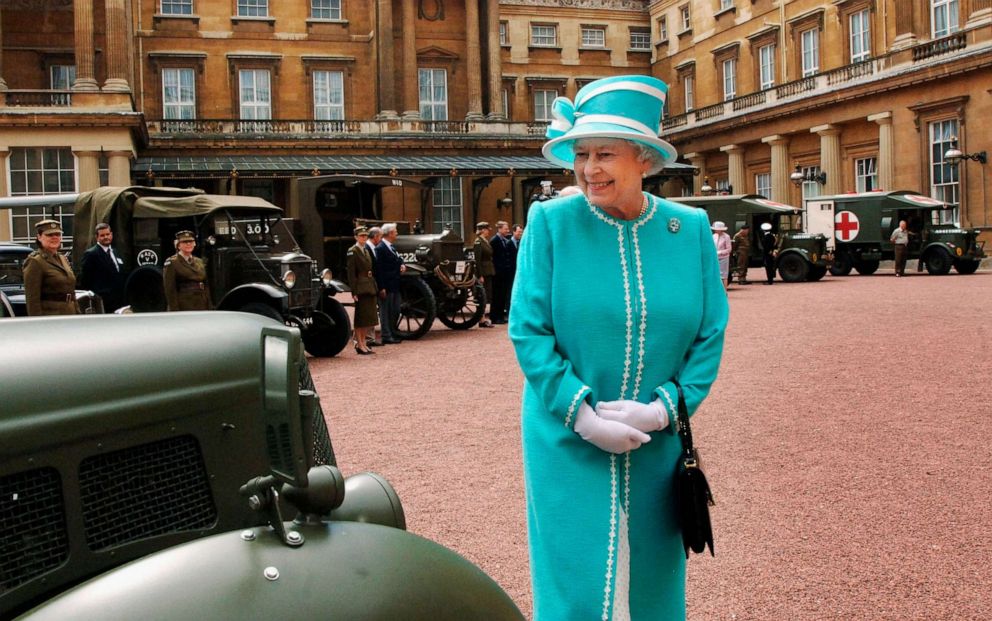 Anwar Hussein Collection/Getty Images
Queen Elizabeth ll looks at vintage vehicles used by the First Aid Nursing Yoemanry during World War II, in which the Queen herself served, in the quadrangle at Buckingham Palace on June 28, 2007 in London, England. 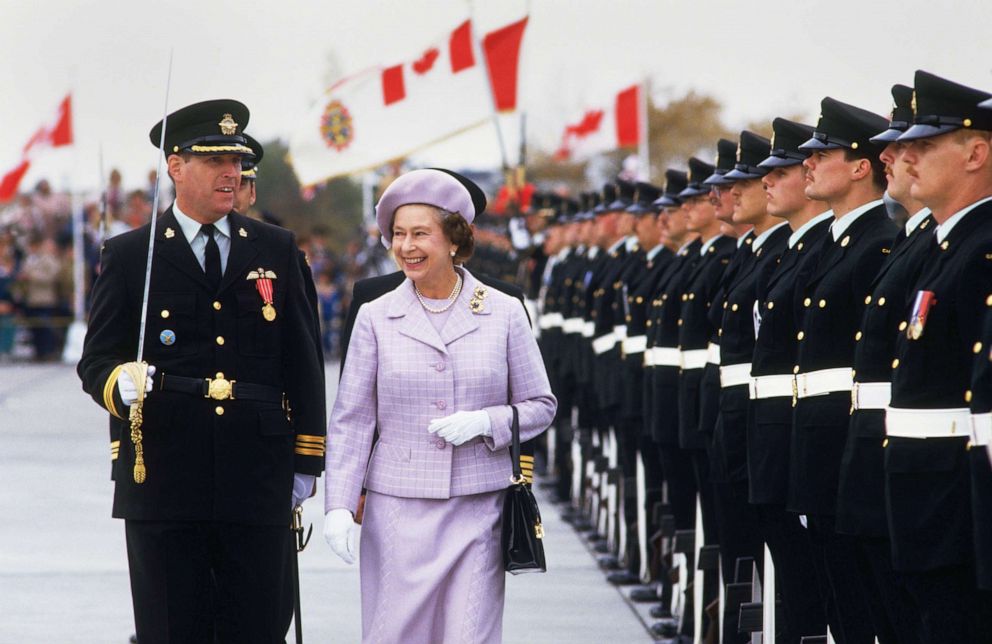 David Levenson/Getty Images
Queen Elizabeth II reviews the Guard of Honour at the Canadian Forces Base in Winnipeg, Canada, Oct. 7, 1984. 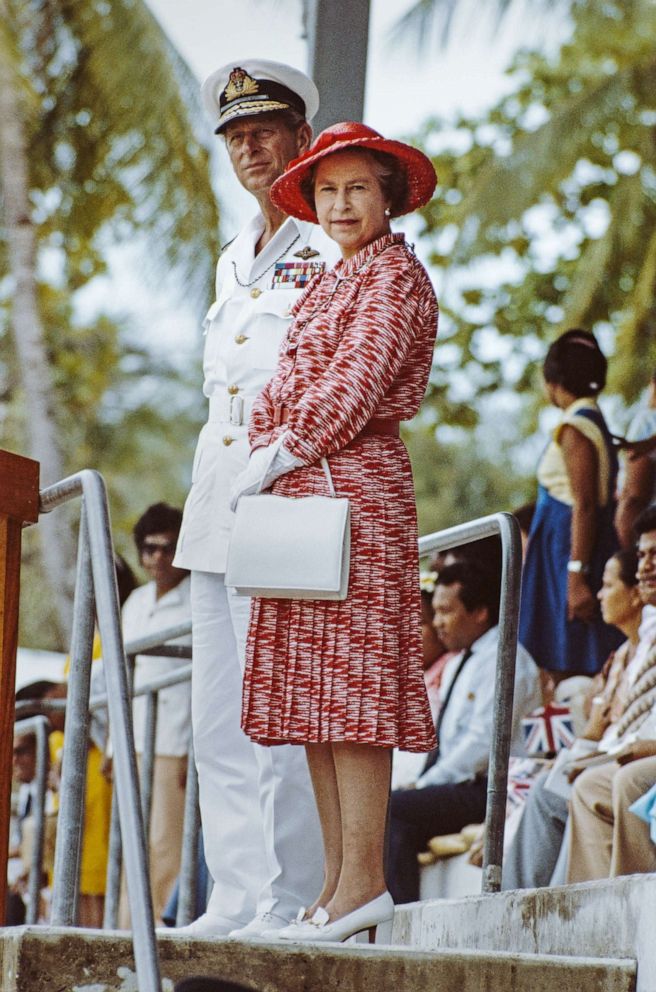 Jack Hill/WPA Pool/Getty Images
Queen Elizabeth II is presented to the Keys of Portsmouth by the Mayor ahead of the National Commemorative Event commemorating the 75th anniversary of the D-Day invasion on June 5, 2019 in Portsmouth, England. 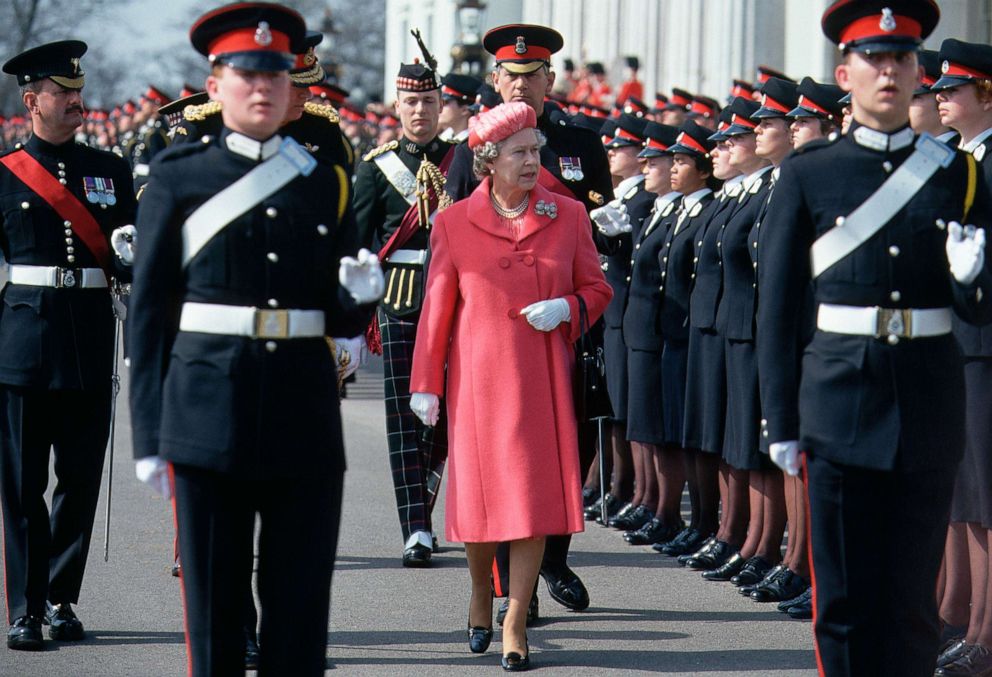 Patrick Ward/Corbis via Getty Images
Queen Elizabeth II inspects the troops at the passing out parade at Sandhurst Military Academy in Berkshire, England, in 1985.

Editor's note: This report was originally published on June 7, 2019.