Prince Harry traveled solo to the United Kingdom over the weekend to attend the funeral of his grandfather, Prince Philip, who died at the age of 99.

Harry's wife, Duchess Meghan, who is expecting the couple's second child, is staying home in California, reportedly due to her pregnancy and at the advice of her doctor.

Harry -- who is staying at his family's Frogmore Cottage in Windsor as he follows COVID-19 protocols after traveling overseas -- will see his family in person for the first time since he and Meghan stepped down from their senior royal roles last year.

While Meghan's decision not to travel to the U.K. for Philip's funeral raised more speculation on the divide between the Sussexes and Harry's family, royal experts say her decision should not be seen as a snub.

"If there’s one thing that has remained constant throughout all of the turbulence of the past year it’s Harry and Meghan’s close relationship with the queen and Prince Philip," ABC News royal contributor Omid Scobie said Monday on "Good Morning America." "Although Meghan isn’t here, she is of course supporting Harry. Her mind is very much on the situation over here."

Meghan is expected to give birth this summer, although her exact due date has not been announced. She and Harry announced their pregnancy publicly on Valentine's Day, and confirmed last month that they are expecting a girl.

Pregnant women are generally advised against air travel after 36 weeks of pregnancy, and even earlier than that for women who have high-risk pregnancies, such as twins or triplets, according to Dr. Jessica Shepherd, a Chicago-based OBGYN.

She advises pregnant women traveling at any stage in their pregnancy to make sure they have contingency plans in place should they run into complications while away from their primary medical team. 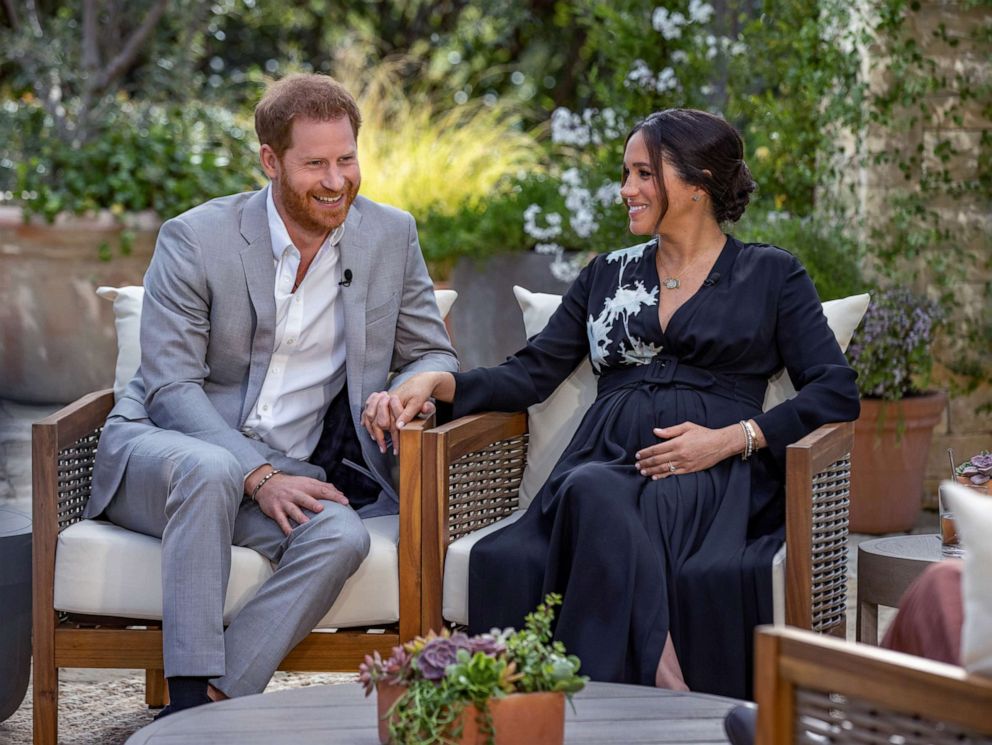 "It can be a light discussion but definitely think ahead to, ‘If I were to have any issues, where would I go? Could I contact my doctor? What type of care would I be able to get?" Shepherd, who does not treat Meghan, told "GMA." "And if you’re going to another continent where they may have diseases, think ahead that you may need more vaccinations before you go."

Had Meghan decided to travel to attend Prince Philip's funeral, she would have faced an approximately 10-hour flight from Los Angeles to London. That is a long and taxing flight for a pregnant woman during normal circumstances, but especially amid the coronavirus pandemic, according to Shepherd.

In addition to the risks on long flights currently posed by the pandemic, pregnant women, especially those with preexisting conditions, have to be careful on long flights about the risk of developing deep vein thrombosis (DVT), or when a blood clot forms in a deep vein, noted Shepherd.

Pregnant women are five times more likely to experience a blood clot compared with women who are not pregnant, according to the CDC.

MORE: Why Duchess Meghan's pregnancy at 39 is called 'geriatric' by some doctors

The CDC advises pregnant women against traveling a distance of more than four hours and to take precautions to keep their legs moving, including doing seated leg stretches and getting up and walking when possible.

Shepherd said pregnant women can also wear compression stockings to help improve blood flow and reduce pain and swelling during long periods of inactivity, like sitting on a flight.

With the decision on whether or not to travel being a very personalized one, Shepherd emphasized that pregnant women must have conversations with their doctors and ask as many questions as needed to feel confident in their decision.

"Every individual is different and those are discussions that need to be had in order for both the provider and the patient to feel safe in decisions that are made," she said. "This is a matter of their health and they should feel empowered by wanting to do the best things for themselves and their babies, so it is worthy to have that conversation."