This year marks the 49th anniversary of the Supreme Court's ruling on Roe v. Wade, the landmark case that made abortion a federally protected right in the United States.

It could also be the year we see Roe v. Wade overturned, with a dramatically altered landscape of abortion access as a result, experts said.

"2022 is going to be the most critical year since 1973," said Elizabeth Nash, interim associate director of state issues at the Guttmacher Institute, a reproductive rights organization. "This has been decades in the making."

Mary Ziegler, a visiting professor of constitutional law at Harvard Law School and author of "Abortion and the Law in America: Roe v. Wade to the Present," describes 2022 as "the year that abortion rights in America are gone." 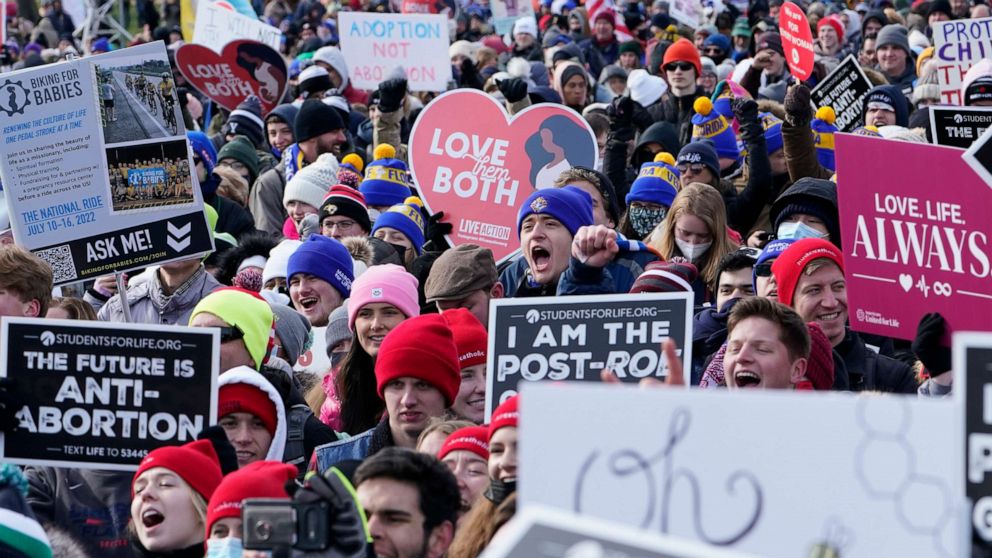 What will happen next, according to Ziegler, is much less certain.

"There are a lot of unknowns when it comes to what happens after Roe, in part because everyone has been so fixated on what happens to Roe," she said. "There hasn't been as much discussion really in the anti-abortion movement or the abortion rights movement about what happens when Roe is gone."

As the nation braces for a fierce fight over abortion rights, here are five things to watch in the months ahead, according to Ziegler and Nash.

The news that Justice Stephen Breyer plans to retire from the Supreme Court at the end of the term gives President Joe Biden his first opportunity to name a new justice to the court.

Stepping down early in the Biden presidency and while Democrats retain a razor-thin majority in the U.S. Senate may help ensure the seat of Breyer is filled with someone who shares his judicial philosophy, which leans more liberal.

Biden said Thursday he plans to nominate the first Black woman to the high court as his historic first pick.

The most consequential action on abortion this year, though, is expected to happen in May or June, when the Supreme Court issues its ruling on Mississippi, Dobbs v. Jackson Women’s Health, according to Ziegler and Nash.

In the case, the state of Mississippi is arguing to uphold a law that would ban most abortions after 15 weeks of pregnancy, while Jackson Women's Health, Mississippi's lone abortion clinic, argues the Supreme Court's protection of a woman's right to choose the procedure is clear, well-established and should be respected. 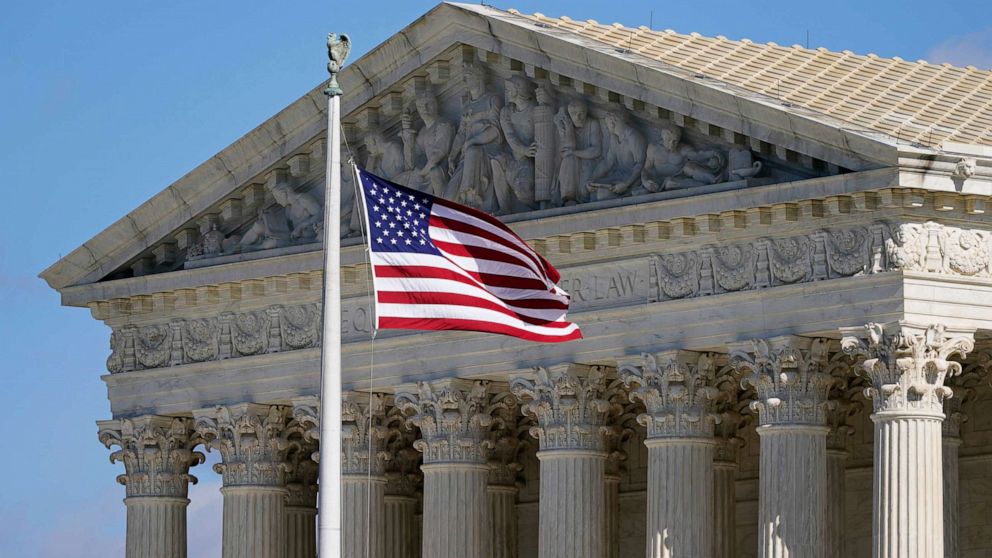 Patrick Semansky/AP, FILE
An American flag waves in front of the Supreme Court building on Capitol Hill in Washington, Nov. 2, 2020.

Mississippi argues Roe and Casey were wrongly decided and that each state should be allowed to set its policy.

If the Supreme Court rules in Mississippi's favor and upholds the law -- as is expected because of the court's current makeup -- the focus will turn to states.

"We'll be watching what the details are because that could matter to in terms of whether the court seems open to arguments that abortion is unconstitutional, and states should be disallowed from having abortion be legal within their borders or not," said Ziegler. "That will tell us a lot about what states are actually going to be able to do."

3. States' actions in the wake of the Supreme Court ruling:

More than half of the nation's 50 states are prepared to ban abortion if Roe is overturned, according to a Guttmacher Institute report co-authored by Nash.

Twenty-one states already have laws on the books that would immediately ban abortion if Roe were overturned. Five additional states are likely to ban abortion should Roe be overturned, the Guttmacher report said.

"States have been passing abortion restrictions for the past 49 years," Nash said. "Particularly over the past 10 years, these restrictions have become more burdensome for patients and providers. We have moved past restrictions into abortion bans."

Because the states that plan to ban abortion are focused in specific geographic regions, including the South, the expected effect is that women will have to travel much longer distances, at a greater cost and inconvenience, to seek abortion care, according to Nash.

If abortion is banned in Louisiana, for example, the nearest state for abortion care would be Illinois, a 1,300-mile journey round trip, according to Nash.

"If you're thinking about the average abortion costing $550, and then somebody trying to navigate a trip of several hundred miles, you're adding hundreds of dollars to the cost and you're asking that person to pull that money together very quickly," she said. "That is an insurmountable burden for so many."

On the other side, states that support abortion rights, like California and New York, are also ones to watch if Roe is overturned, according to Ziegler.

"The question is, what do they do, if anything, to reach people in other states," she said. "Do they follow through on the kinds of proposal California issued earlier, which was to say we're going to create sanctuaries where abortion is funded and available for people out of state."

Another thing to watch, according to Ziegler, is whether states that have banned abortion make it increasingly difficult for their residents to obtain abortions in other states.

State elections will be even more in the spotlight because of the outsized role states are anticipated to play in the abortion debate.

In the 2022 midterm elections, to be held on Nov. 8, not only will control of the U.S. House and Senate be decided, but also the governorship 36 states, according to FiveThirtyEight.

Also up for grabs across the country will be seats in state legislatures, which are the legislative bodies responsible for writing and voting on state laws. 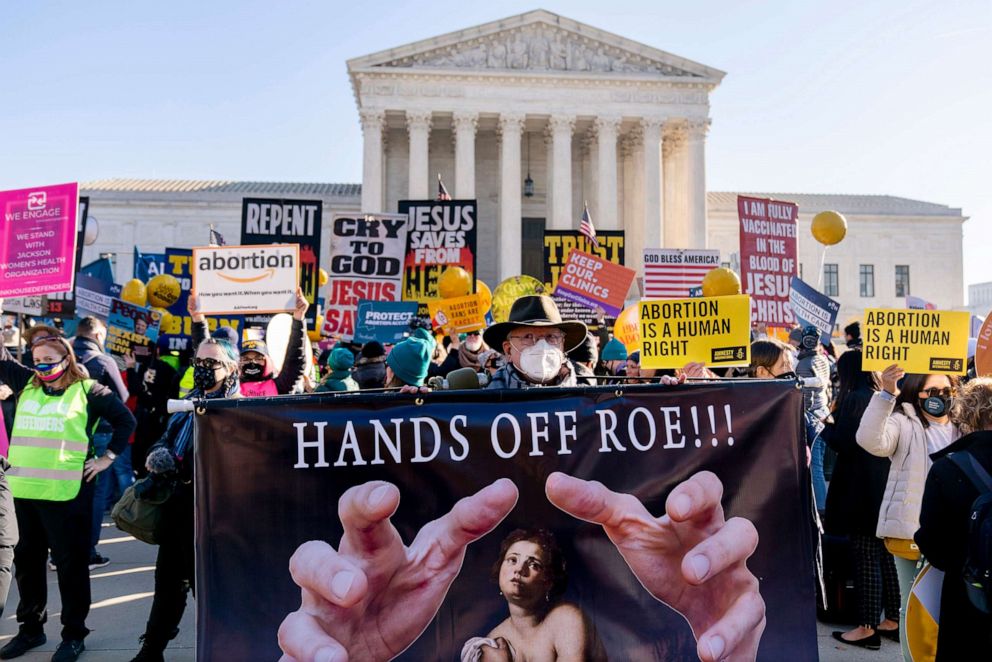 Andrew Harnik/AP, FILE
In this Dec. 1, 2021, file photo, Stephen Parlato of Boulder, Colo., holds a sign that reads "Hands Off Roe!!!" as abortion rights advocates and anti-abortion protesters demonstrate in front of the Supreme Court in Washington, D.C.

"If Roe is overturned, one question will be whether that's the end of the story or whether there's a big backlash that unsettles state elections, national elections or revives the issue of court reform," Ziegler said. "The November elections will probably be the first big test we have to see what the response is going to be."

The Biden administration is limited in what it could do in the wake of Roe being overturned, but is still worth watching, according to Ziegler.

"Some of the things that administration could do would be limited by Congress, but there are other things that would be done more administratively, particularly vis-a-vis medication abortion," she said. "So it'll be interesting to see what the Biden administration, if anything, does to try to counter a Supreme Court decision reversing Roe."

In December, the Food and Drug Administration permanently lifted its restriction on the abortion pill mifepristone that required providers to dispense the drug in person, allowing it to be delivered by mail. Women still must obtain the pill through a certified health care provider.

And earlier this month, the administration announced the first-ever Intra-agency Task Force on Reproductive Healthcare Access through the Department of Health and Human Services.

The task force's goal, according to HHS, is to "facilitate collaborative, innovative, transparent, equitable, and action-oriented approaches to protect and bolster sexual and reproductive health."