Adidas on Tuesday said it has terminated its relationship with Ye, the rapper formerly known as Kanye West, immediately and will cease production of Yeezy branded products.

"Adidas does not tolerate antisemitism and any other sort of hate speech," the company said in a press release. "Ye's recent comments and actions have been unacceptable, hateful and dangerous, and they violate the company's values of diversity and inclusion, mutual respect and fairness."

There has been growing pressure on big-name brands to cut ties with the rapper after he made antisemitic remarks on Twitter a few weeks ago.

The rapper later followed with more offensive comments against the Jewish community on Revolt TV's "Drink Champs" in a since-deleted interview.

Ye's comments against the Jewish community were also referenced over the weekend by a group of Los Angeles neo-Nazis who hung antisemitic flyers on a 405 freeway overpass. 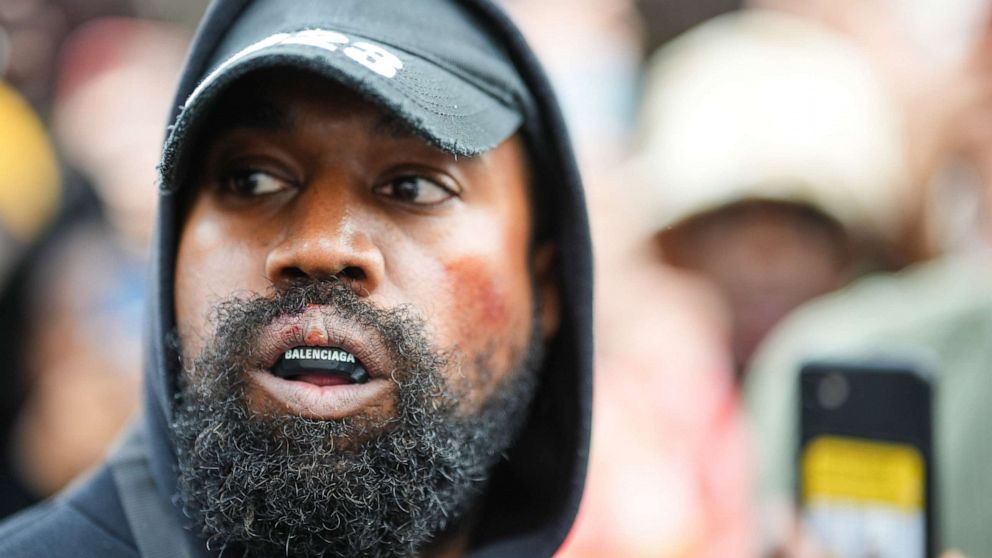 In addition to Ye's remarks against the Jewish community, another recent controversy has seen the "Donda" rapper sporting a "White Lives Matter" T-shirt during his surprise Yeezy Season 9 show in Paris along with conservative political commentator Candace Owens.

The phrase has been described by the Anti-Defamation League and Southern Poverty Law Center as a white supremacist hate slogan that originated in 2015 as a response to the civil rights movement Black Lives Matter. The groups note that the phrase has been commonly used by white supremacist groups such as the Aryan Renaissance Society and the Ku Klux Klan on everything from promotional materials to campaigns.

Responding to the backlash over the T-shirts, Ye wrote in a since-deleted Instagram post, "Here's my latest response when people ask me why I made a tee that says white lives matter... THEY DO."

Kanye West decision to wear a "White Lives Matter" shirt is disgusting, dangerous, and irresponsible. Some of y'all will rush to defend him. You should ask yourselves why… pic.twitter.com/YT4a6c9tKI

Hollywood talent agency Creative Artists Agency, also known as CAA, announced Monday that it would no longer represent the rapper. Film and television studio MRC also said it would be shelving a documentary on West, saying in a statement that it "cannot support any content that amplifies his platform."

In September, Gap announced the ending of its Yeezy Gap partnership, and the brand shared in a statement Tuesday, "Our former partner's recent remarks and behavior further underscore why. We are taking immediate steps to remove Yeezy Gap product from our stores and we have shut down Yeezygap.com."

The statement continued, "Antisemitism, racism and hate in any form are inexcusable and not tolerated in accordance with our values. On behalf of our customers, employees and shareholders, we are partnering with organizations that combat hate and discrimination."

Several reports have also stated that brands such as Balenciaga will no longer work with Ye.

On Tuesday evening, athletes Jaylen Brown and Aaron Donald announced they are leaving Ye's agency Donda Sports -- with both citing comments about antisemitism and hate.

"I have always, and will always, continue to stand strongly against any antisemitism, hate speech, misrepresentation, and oppressive rhetoric of any kind," Boston Celtics star Brown said in a statement. "[I] now recognize that there are times when my voice and my position can't coexist in spaces that don't correspond with my stance or my values. And, for that reason, I am terminating my association with Donda Sports."

The statement comes a day after Brown had told the Boston Globe that he was staying with the agency, which represents athletes in their marketing deals.

Donald, a defensive tackle for the Los Angeles Rams, and his wife, Erica Donald, said in a joint statement that they decided to part ways with the agency because the "recent comments and displays of hate and antisemitism are the exact opposite of how we choose to live our lives and raise our children."

Hate speech is never OK or excusable. I stand together with the Jewish community and call on the terrible violence and hateful rhetoric towards them to come to an immediate end.

Ye's ex-wife, Kim Kardashian, along with many other public figures have stood in solidarity with the Jewish community following his antisemitic remarks.

"Hate speech is never OK or excusable," Kardashian tweeted on Monday. "I stand together with the Jewish community and call on the terrible violence and hateful rhetoric towards them to come to an immediate end."

Kendall Jenner, Reese Witherspoon, Amy Schumer, John Legend and others have also spoken out against Ye's comments aimed at the Jewish community.