Prince Harry and Meghan's highly-anticipated docuseries is here, and loaded up with lots of big moments.

Specifically focusing on episode three, Duchess Meghan reflects back on some of her style decisions as a working royal, and why she wore a lack of color during her tenure.

She revealed not wanting to clash or overshadow the late Queen Elizabeth II or other senior royals such as Princess Kate. 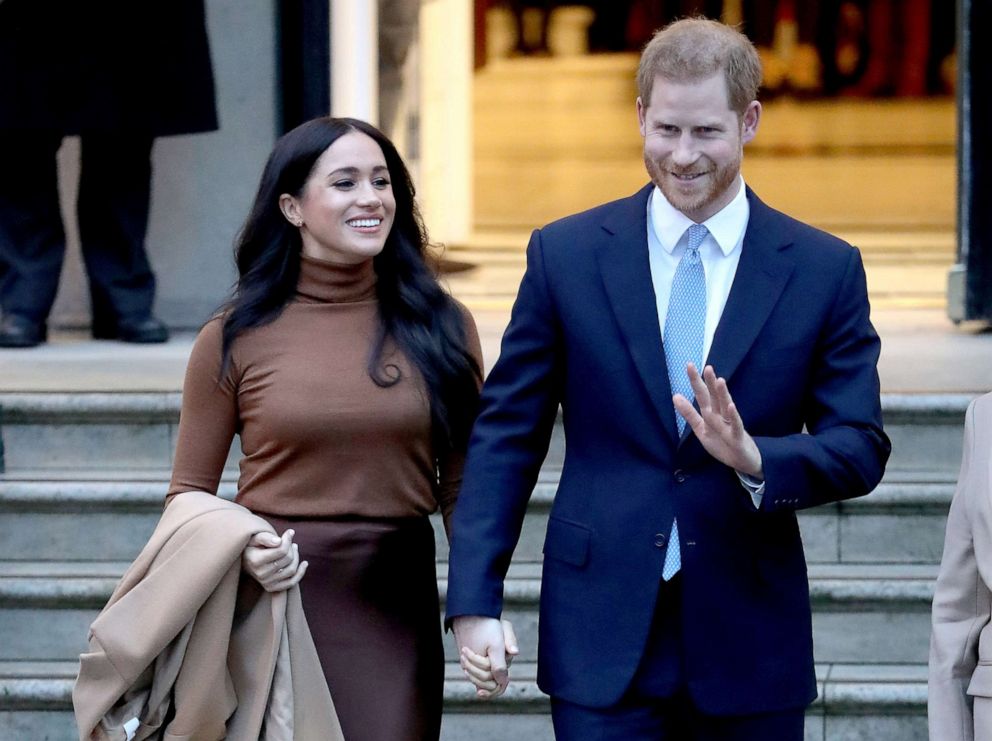 "Most of the time that I was in the U.K., I rarely wore color. There was thought in that," Meghan said during the third episode of her and Prince Harry's Netflix docuseries. "To my understanding, you can't ever wear the same color as Her Majesty if there's a group event. But then you also shouldn't be wearing the same color as one of the other more senior members of the family."

She went on to say, "So I was like, 'Well, what's a color that they'll probably never wear?' Camel, beige, white... so I wore a lot of muted tones, but it was also so I could just blend in. I'm not trying to stand out here. There was no version of me joining this family and me not doing everything I could to fit in. I don't want to embarrass the family."

Throughout several occasions including one where Meghan and Queen Elizabeth II attended a ceremony to open the new Mersey Gateway Bridge in 2018 as well as another affair where Prince Harry and Meghan attended a reception to celebrate the U.K. and South Africa's important business and investment relationship at the High Commissioner's Residence during their royal tour of South Africa, the duchess is seen wearing neutral-toned clothing. 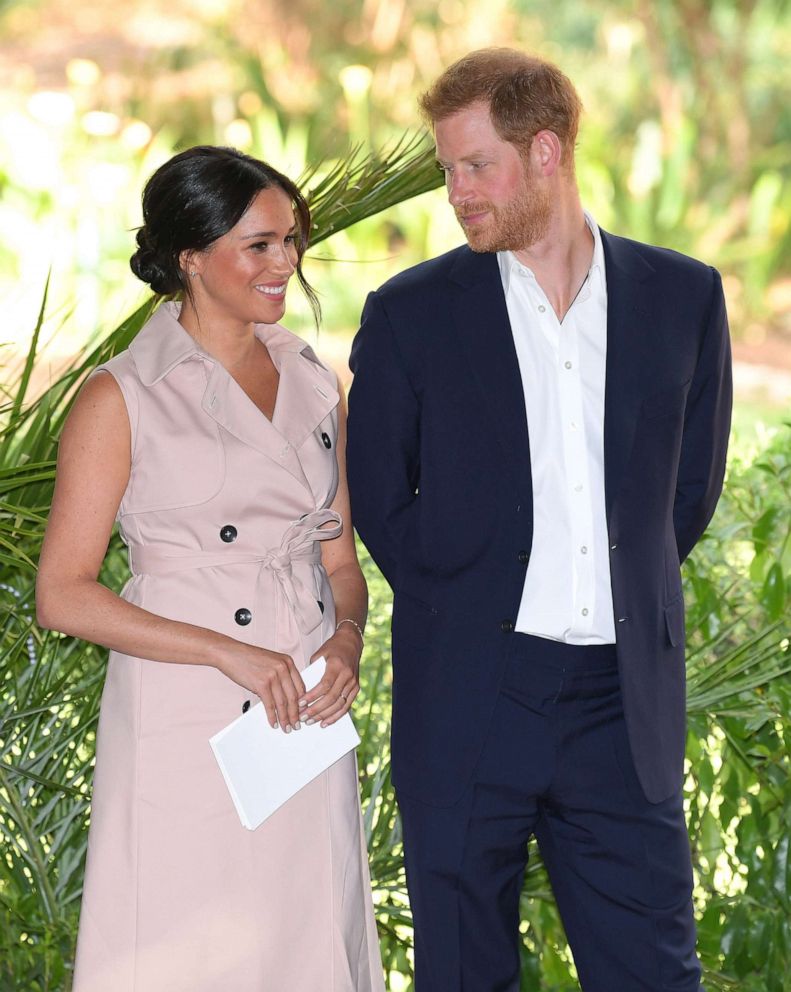 Karwai Tang/WireImage
Meghan, Duchess of Sussex and Prince Harry, Duke of Sussex attend a reception to celebrate the UK and South Africa's important business and investment relationship at the High Commissioner's Residence during their royal tour of South Africa on October 02, 2019 in Johannesburg, South Africa.

Unlike Meghan during her time as a working royal, Queen Elizabeth II did opt for lots of color and became well known for her bright, color-coordinated outfits.

"GMA" previously reported that her rainbow style outfits were a trend started by Her Majesty as a courtesy to the public, according to Sali Hughes, a U.K.-based journalist and author of "Our Rainbow Queen: A Tribute to Queen Elizabeth II and Her Colorful Wardrobe." 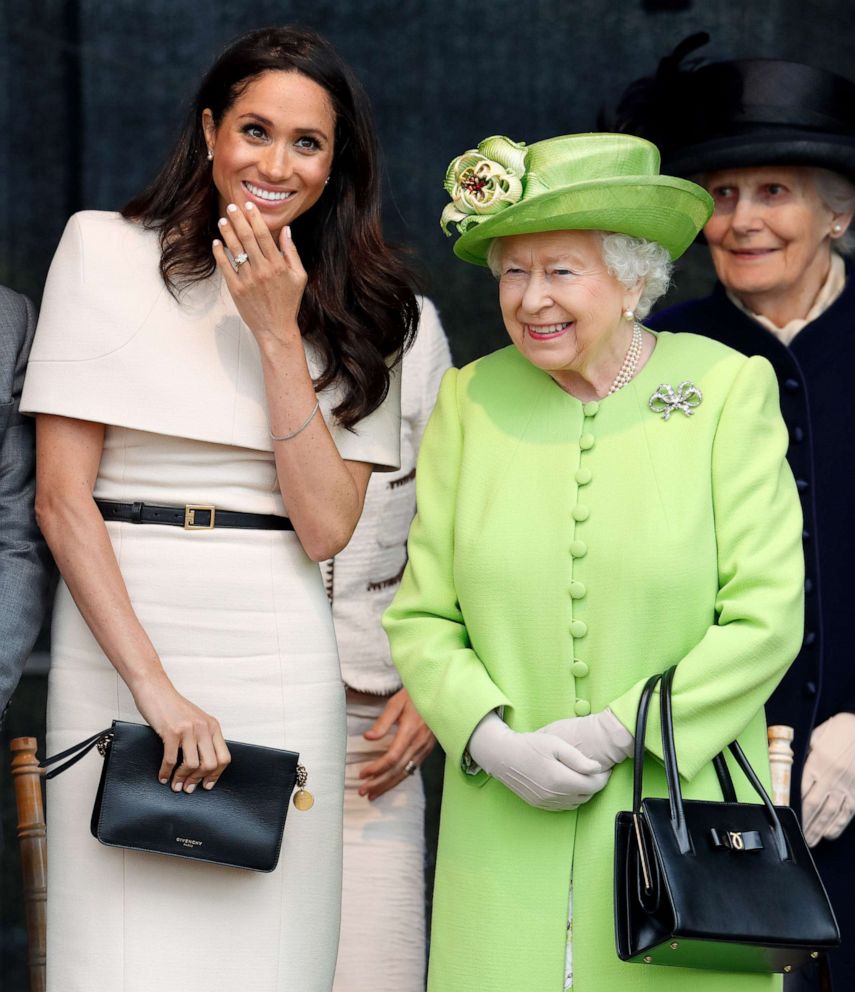 "The queen tends to always wear one color because she feels that if people are queuing for many hours just to see her, the courtesy she should show them makes it so they can see her," Hughes told "Good Morning America." "Those in the audience will be able to pick her out and say they saw the queen."

Aligning with Meghan's recent commentary on her muted wardrobe choices, Hughes also previously mentioned that when the royal family made appearances together, like at Trooping the Color, their outfits were planned around the queen's wardrobe choice.

"Whatever the queen is going to wear, everyone works around that, not because she rules with an iron fist but because the monarch has final say," she said. "She wouldn't approve their outfits but they would know what the queen will wear."