By Jacqueline Laurean Yates, Katie Kindelan
Video by Will Linendoll
Share —
Sign up for our newsletters to get GMA delivered to your inbox every morning!

Today is Duchess Kate's 38th birthday, and celebrations are in order.

The Duchess of Cambridge is expected to celebrate her birthday privately today. She and her family are back in London after spending time at Anmer Hall, their country home, over the Christmas and New Year holidays.

Her birthday comes on the heels of a bombshell announcement from Prince Harry and Meghan, the Duke and Duchess of Sussex, revealing their plans to "step back as senior members" of Britain's royal family.

Still, Kensington Palace released a new photo of the duchess on social media and thanked their followers for their well-wishes. (Harry and Meghan's official Instagram account commented: "Wishing a very happy birthday to The Duchess of Cambridge today!")

Thank you everyone for all your lovely messages on The Duchess of Cambridge’s birthday! Photo 📷 by @MattPorteous

Over the weekend, Prince William and Kate were photographed attending church in Sandringham on Sunday with friends, prompting speculation they celebrated her birthday at Anmer Hall.

Just a few days ahead of her birthday, Duchess Kate stepped out for her first appearance of 2020 in high style! https://t.co/Esb9mnAFb4

Kate was quite busy throughout 2019, leading to a high-profile year -- not to mention some pretty amazing outfits.

She helped design a garden for kids featured at the Chelsea Flower Show, delivered a powerful speech during a five-day official tour of Pakistan with William, opened up in a holiday TV special with British baking legend Mary Berry, and was appointed by Queen Elizabeth a Dame Grand Cross of the Royal Victorian Order, just to name a few of her activites the past year.

The Duke and Duchess of Cambridge have arrived in Islamabad at the start of their official visit to Pakistan!#RoyalVisitPakistan pic.twitter.com/IoUo1IyHPW

Throughout the next year, royal watchers expect Kate to continue her work promoting the outdoors and focusing on early child development.

In the meantime, let's take a royal look back at some of her most stylish looks. 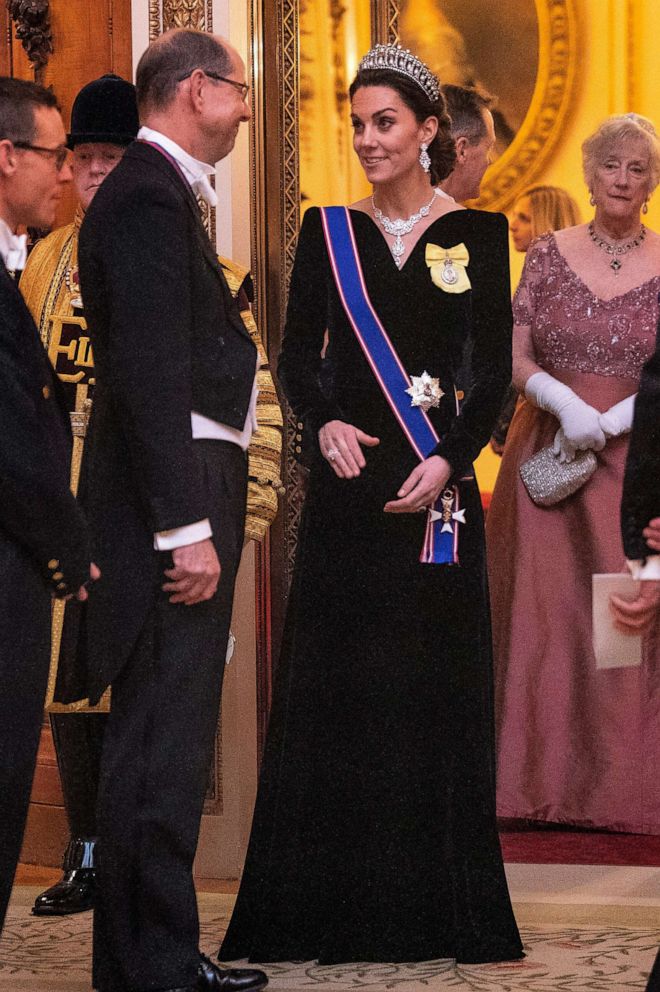 Victoria Jones/WPA Pool/Getty Images
Catherine, Duchess of Cambridge at an evening reception for members of the Diplomatic Corps at Buckingham Palace on Dec. 11, 2019 in London.

To attend the Diplomatic Corps Reception, Kate dazzled in the Cambridge Lover’s Knot tiara that she paired with a navy velvet Alexander McQueen gown. 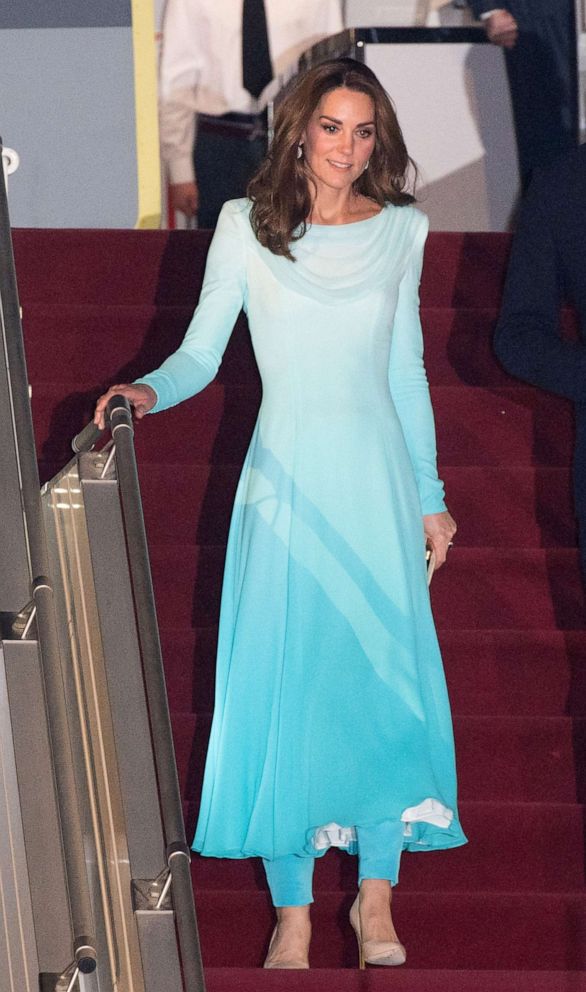 The Duchess of Cambridge turned heads when she arrived at the Pakistani Air Force Base Nur Khan wearing an aqua blue shalwar kameez-inspired dress, a traditional style of dress for Pakistani women.

Sporting a shirtdress at Wimbledon 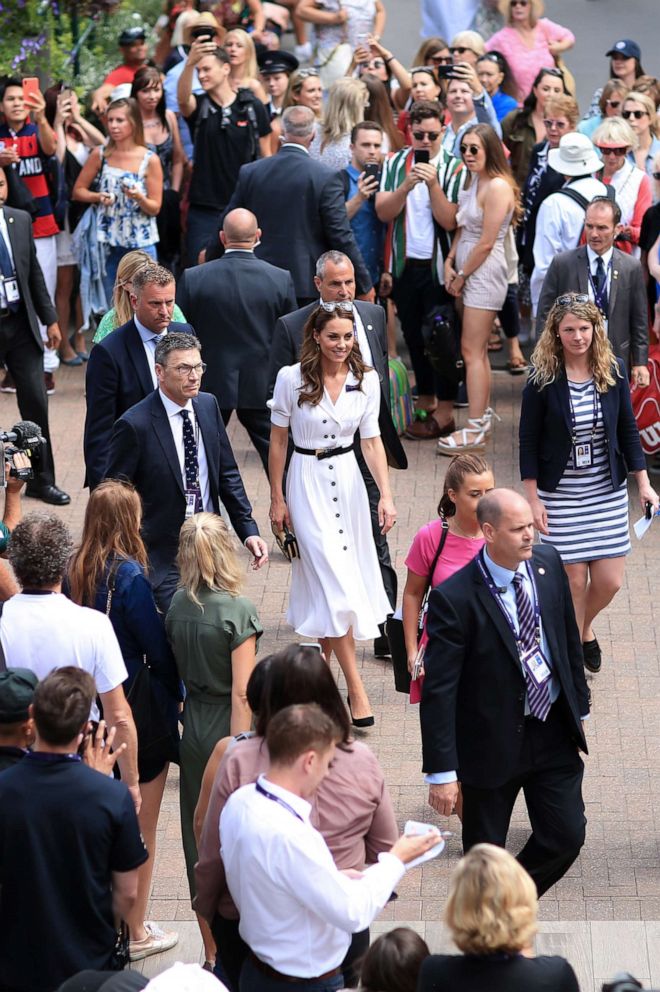 Simon Stacpoole/Offside/Getty Images
Catherine, Duchess of Cambridge is surrounded as she arrives for Day 2 of The Championships - Wimbledon 2019 at the All England Lawn Tennis and Croquet Club on July 2, 2019 in London.

Kate stood out during Wimbledon 2019 at All England Lawn Tennis and Croquet Club as she walked through the crowd wearing a white Suzannah shirtdress and black Ray-Ban sunglasses on top of her head. 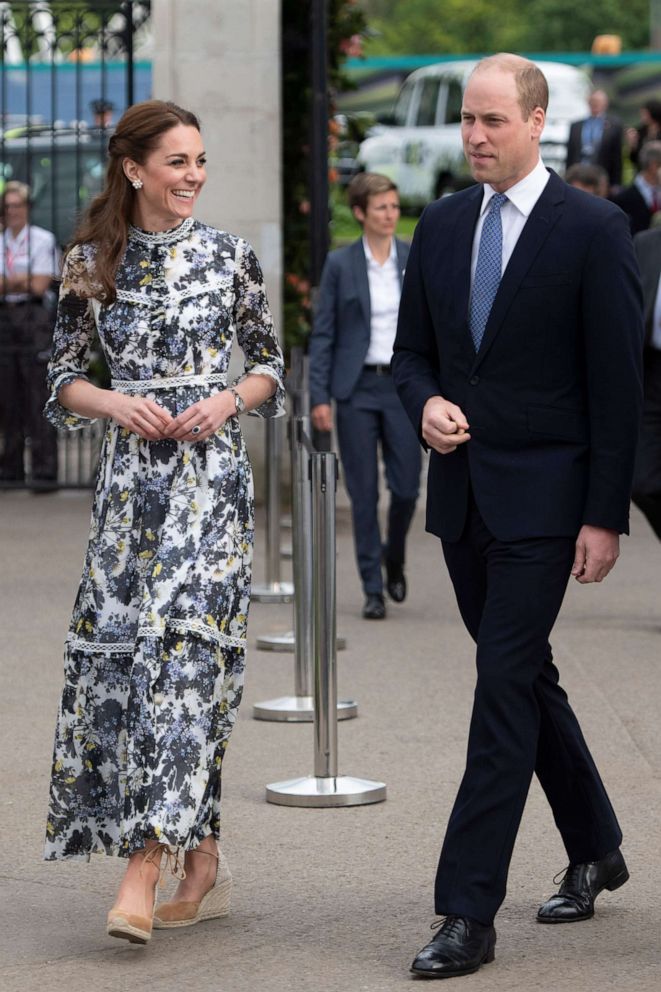 (MORE: Prince William and Kate arrive in Pakistan for royal trip that will pay homage to late Princess Diana)

Many of us couldn't get enough of the Duchess of Cambridge in the purple Gucci pussy-bow blouse she wore during a visit to the Henry Fawcett Children's Centre in London. 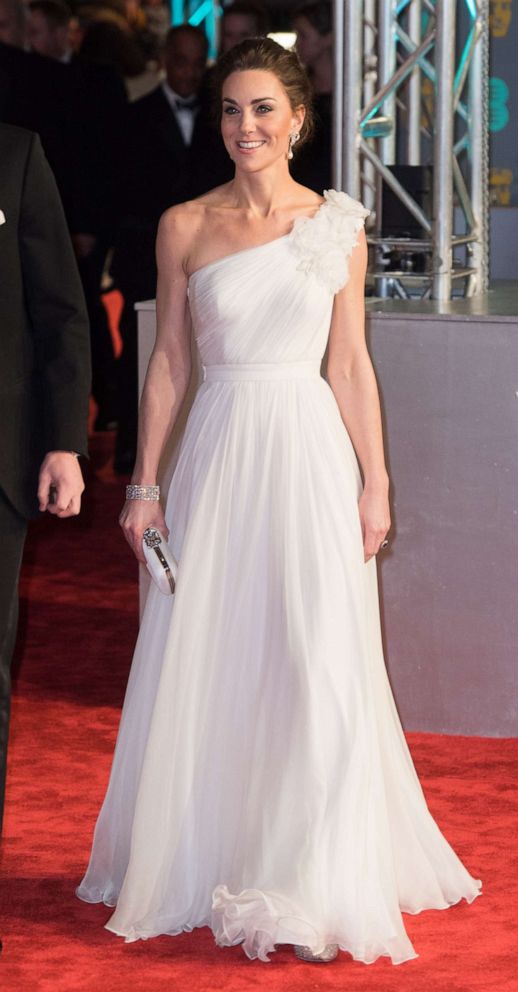 Kate was breathtaking at the 2019 EE British Academy Film Awards. She stunned on the red carpet wearing a one-shouldered flora Alexandre McQueen dress. 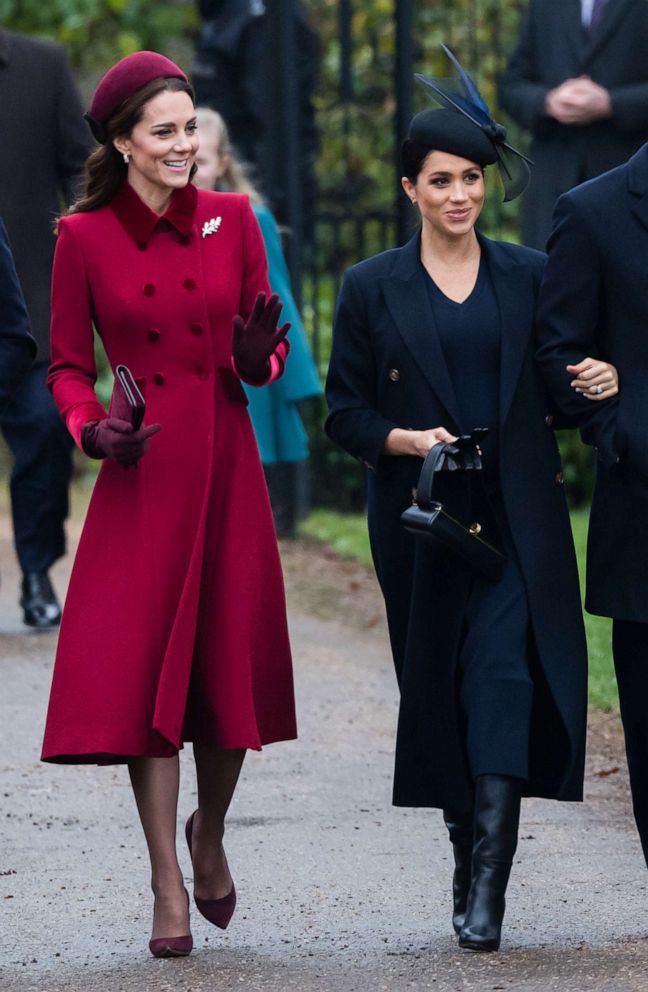 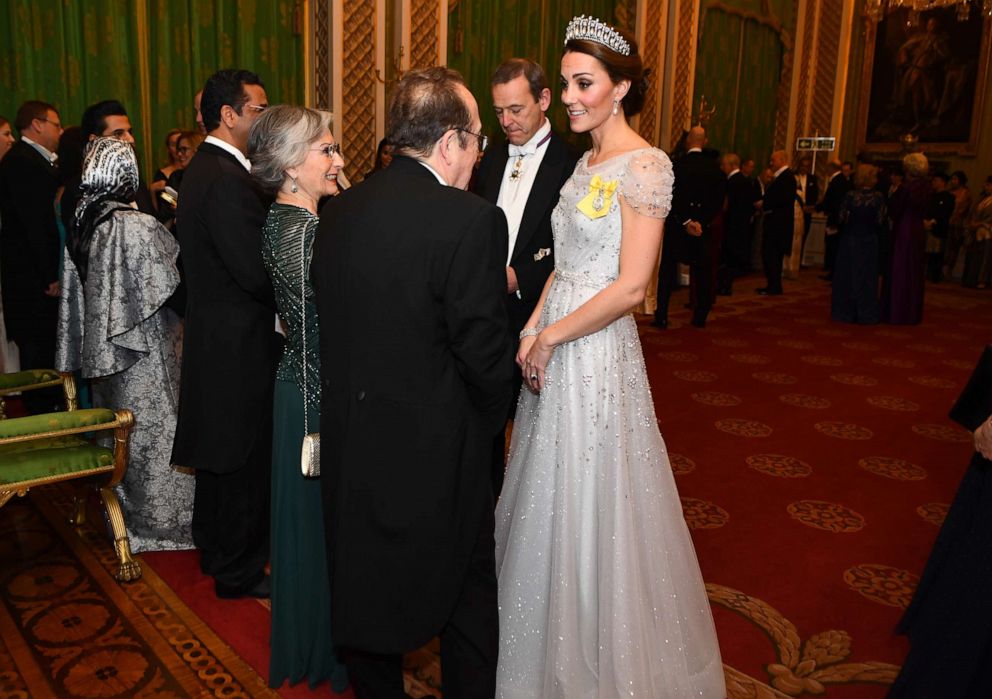 Victoria Jones - WPA Pool/Getty Images
Catherine, Duchess of Cambridge greets guests at an evening reception for members of the Diplomatic Corps at Buckingham Palace on Dec. 4, 2018 in London.

At President Donald Trump's state banquet held at Buckingham Palace, Kate shined in her go-to Lover's Knot tiara, which was beloved by Princess Diana. The tiara was created by Queen Elizabeth's grandmother, Queen Mary, in 1913.